Christian Apologetics: 4 Main Views on How to Defend Your Faith

Christian apologetics is a crucial discipline for the believer. It is also known as pre-evangelism. But the name “apologetics” can be confusing. To clarify, we are not apologizing for our worldview. Far from it. Let’s find out what apologetics is and the four main views on how to defend your faith.

Where Does The Name “Apologetics” Come From?

So where does the name “apologetics” come from? It comes from the Greek word, “apologia,” found in 1 Peter 3:15.

“… but in your hearts honor Christ the Lord as holy, always being prepared to make a defense to anyone who asks you for a reason for the hope that is in you; yet do it with gentleness and respect” (1 Peter 3:15) 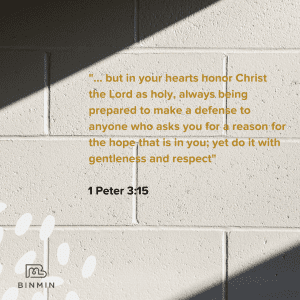 In this verse, apologia is translated as “defense.” Christian apologetics both defends and gives reasons to believe in our worldview.

But Christian apologetics cannot be considered in isolation. As “pre-evangelism” it is always combined with evangelism. If it isn’t, then it loses its usefulness.

Why is Christian Apologetics Necessary?

There are several reasons for Christian apologetics.

First, the Bible is no longer an essential part of our cultural heritage. As a result, many critics of Christianity have never read the Bible.

As a result, their challenges amount to only second-hand, flawed views of Christianity.

Consequently, they don’t know that the answers to their question are easy to find.

Second, many Christians struggle unnecessarily when confronted. They cannot explain why they believe what they believe. For example:

Third, Christian apologetics answers hard questions that keep outsiders from considering Christianity. But after receiving answers they learn Christianity is true. And there are no obstacles to receiving the gospel and placing their faith in Jesus.

A Few Considerations About Christian Apologetics

Before diving in, there are a few preliminary remarks.

First, apologetics is only a tool. It presents reasons why Christianity is the only valid worldview. And it defends Christianity against attacks from those who believe other worldviews.

Third, Christian apologetics is often unnecessary when sharing the gospel. However, in some cases, it can be helpful with a genuine seeker.

For instance, apologetics is helpful if a friend is struggling with the idea that only one religion can be true. Or if they doubt the Bible’s reliability. Further, they may question the possibility of miracles. Pre-evangelism removes these barriers.

Fourth, apologetics helps new and inexperienced believers. For example, many new Christians have mistaken ideas from their pre-Christian lives. Additionally, Christian apologetics helps with our critical thinking skills. And finally, it bolsters our confidence in Christianity’s truthfulness.

There are several different apologetic methods. The four main views are:

No one form of Christian apologetics is superior. And arguments about “the best method” are pointless. 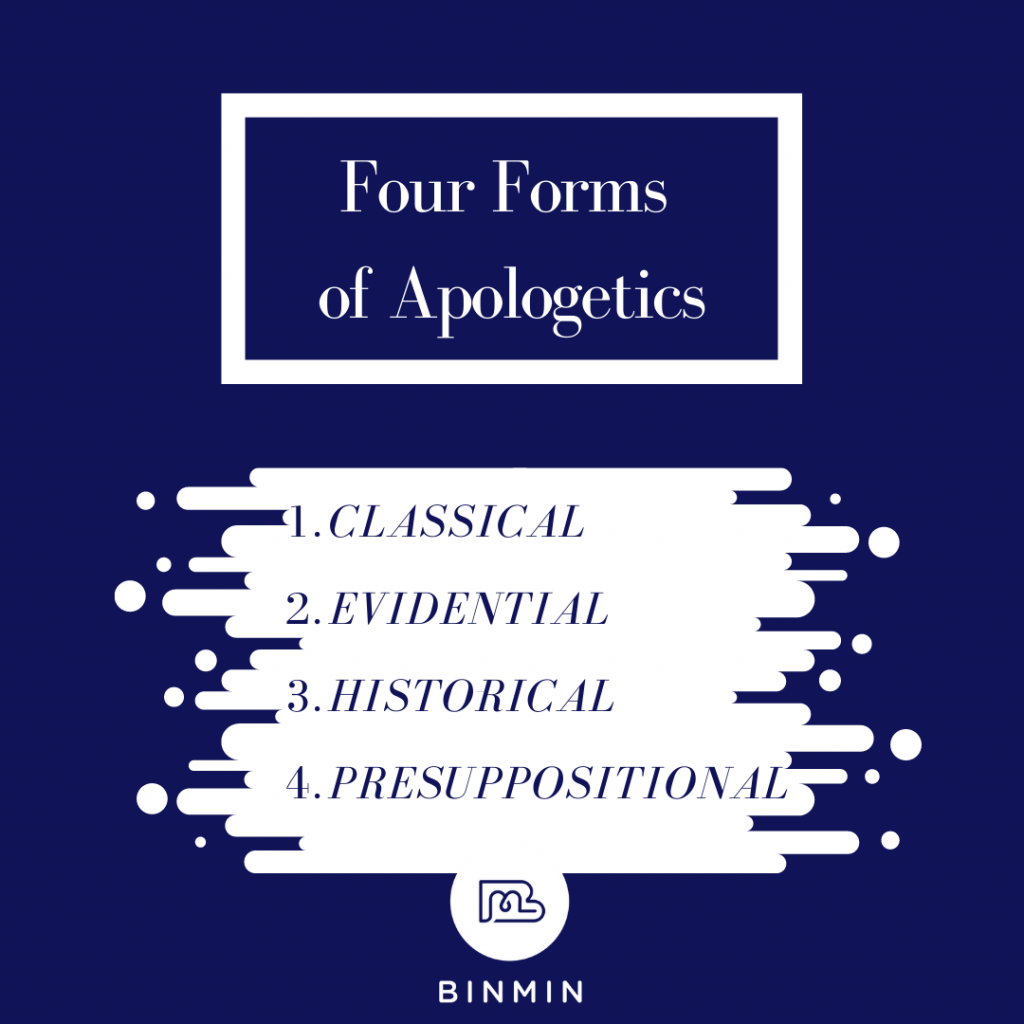 Greek philosophers Plato and Aristotle influenced many of the early Church Fathers. For example, Thomas Aquinas is a classical apologist.  And C.S. Lewis, Norman Geisler, William Lane Craig, and J.P. Moreland all use classical apologetics.

The classical approach is the most philosophical view of Christian apologetics. It is also called “two-step” apologetics.

To sum up, classical apologetics is a philosophical argument. In other words, every step builds on the one before.

And these steps lead to two inevitable conclusions. First, that Jesus is God. And second, that the Bible is the Word of God.

Historical apologetics, as the name implies, uses historical evidence alone. And above all, it uses Christ’s resurrection as its foundation.

That is why it’s also called “resurrection apologetics.” One famous promoter of this view is John Warwick Montgomery.

Historical apologetics begins by proving the New Testament documents are accurate. For instance, it looks at the

This step proves that we can trust the authors and their writings.

The next step is to look for errors or contradictions. In short, there aren’t any.

Furthermore, the writings show Jesus fulfilled hundreds of Old Testament prophecies. He performed many miracles and lived a sinless life. The historical evidence for his resurrection is indisputable.

In conclusion, the resurrection proves Jesus is God. And since Jesus is God, he cannot lie.

Thus the Bible is the Word of God because of Jesus’s claims.

But convincing outsiders of Christianity’s truthfulness can be challenging based on subjective criteria.

Also, in contrast to classical apologetics, evidential apologetics doesn’t follow a strict sequence. And it leaves the rational proofs for God’s existence optional.

But in the same vein as historical apologetics, it is eclectic. It interweaves evidence from various fields. And hopes the cumulative evidence will be persuasive. Well-known evidential apologists include Josh McDowell, Gary Habermas, and Paul D. Feinberg.

Presuppositional apologetics represents at least four different approaches (listed below). But all forms rely on the philosophical theory of “how we know things,” or epistemology.

An assumption or a fact taken for granted would be a “presupposition.” And every person has presuppositions or assumptions that affect our reasoning.

For example, this view of apologetics presupposes first that the Triune God exists. Second, that the Bible is true. And third, that non-Christians cannot understand spiritual things (2 Cor. 2:14).

But if the person we are sharing with is not a Christian, they usually won’t share these same assumptions.

John Frame is a popular supporter of presuppositional apologetics.

This form of presuppositionalism patterns their argumentation after Immanuel Kant’s transcendental argument.

In short, they assume that God is the source of all universal and unchanging laws. These include logical, moral, and scientific laws. Thus God is the starting point, and there can be no reason or logic apart from God.

In contrast, non-Christians suppress the knowledge of God and truth (Rom. 1:18-21). As a result, their worldviews contain contradictions.

So the presuppositionalist compares the Christian worldview with another belief system. By careful questioning, the apologist exposes the contradictions in the non-Christian’s worldview.

This form of Christian apologetics begins with the Trinity. And we only know about the Trinity because of the Bible. The test for whether this is true is the “law of noncontradiction.”

Only Christianity is non-contradictory and internally consistent. All opposing worldviews are false because they contain contradictions.

This third presuppositional apologetic uses two (or three) tests for the truth.

(1) The first test is rational consistency. This test uses the “law of noncontradiction.” This law looks for contradictions in the belief system. And the Christian worldview is free of contradictions.

The only worldview that measures up to all three is Christianity. Thus, only Christianity is correct, and all other opposing systems are false.

This is famed teacher Francis Schaeffer’s apologetic approach. This method claims all non-Christian systems are unlivable or false. And only the Christian faith is livable or true.

Which View of Christian Apologetics is Best? Take a Tip from Mr. Alexander

A man once approached Charles M. Alexander (19th-century pastor R.A. Torrey‘s song leader) and said, “I believe in trying to win men to Christ, but I don’t like your methods.”

“I don’t like them very well, either” Mr. Alexander replied. “Tell me, how do you do it?”

The man hesitated, his face got red, and he finally stammered, “Well—I’m not sure that I do it at all.”

“In that case,” Mr. Alexander replied, “I like my way better than yours.”

This blog is an all-too-brief introduction to the various forms of apologetics.

Each system helps remove objections to Christianity. And each can give reasons to believe that Christianity is the one true worldview.

This week, determine if you need to go deeper in your own understanding of why Christianity makes more sense than other worldviews. Or begin a conversation with someone about Christianity to see if you can help them answer their questions and point them to Jesus.

Binmin Podcast Ep. 5: “What is Pre-Evangelism?”

8 Tips for the Pre-Evangelist by Dr. Bob Martin III

Binmin Podcast Ep. 8: God & Origins | What Questions Should I Ask About My Faith?

PrevPreviousChristian Salvation: 3 Stages of Fitting You for Heaven
NextScripture Memorization: An 9-Step Owner’s Manual for LifeNext