How can we prove Christianity is the only correct worldview?

First, Christianity is a theistic worldview.

Theism is one of seven worldviews. And a theistic God is an eternal spirit who is infinite in his attributes. For example, he is: 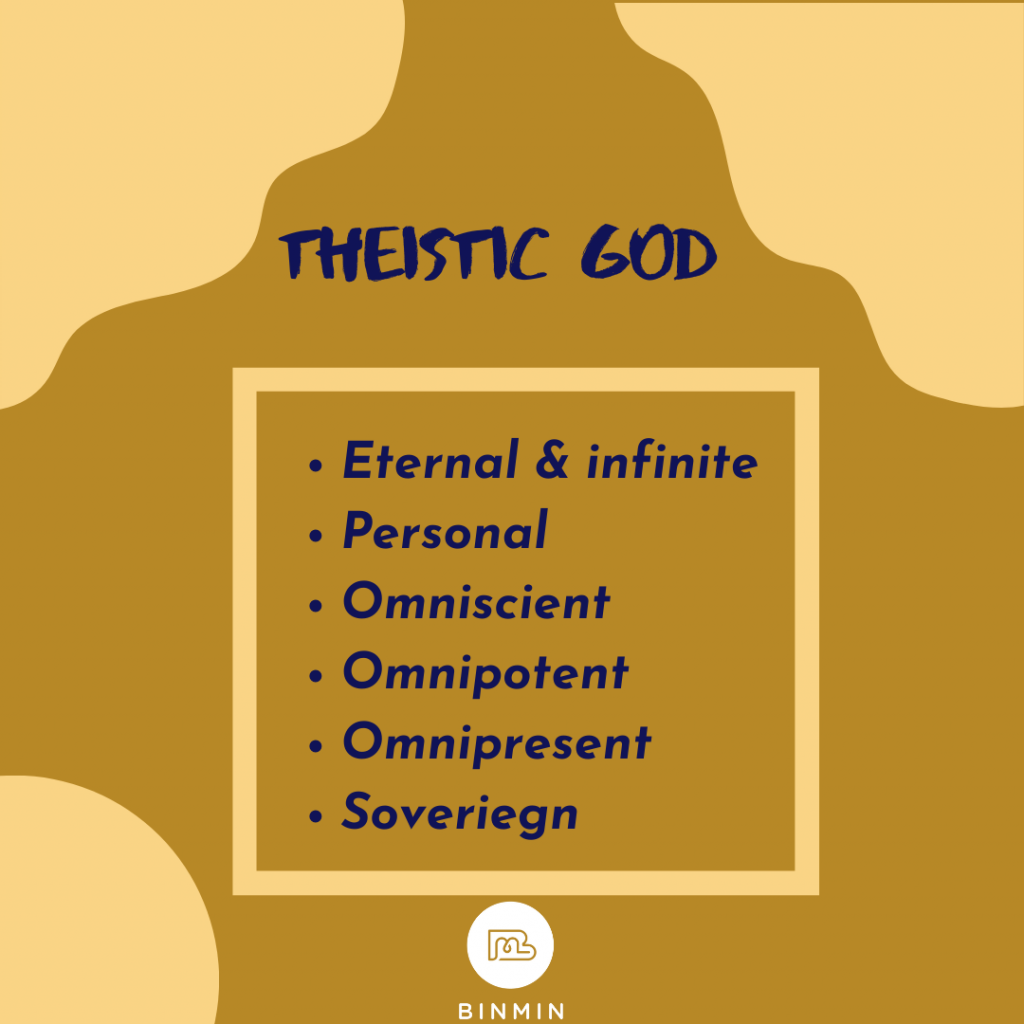 No reasonable person can deny that theism is true. Of course, anyone can say what they want, no matter how silly. But I am speaking of reality, not wishful thinking.

Furthermore, only Christianity is undeniably true when it comes to theistic religions. This means that all other theistic faiths and the other six worldviews are false.

The three main theistic religions are Islam, Judaism, and Christianity.

Before tackling three tests to prove Christianity as the only valid religion, let’s consider the numbers of followers of the three most popular theistic religions:

Since popularity is not a test for truthfulness, we need to determine which is the only true religion.

Fortunately, Dr. Norman Geisler has provided a way to prove Christianity with a three-step method.

The method is called “systematic consistency.” It combines three separate “tests for truth.” 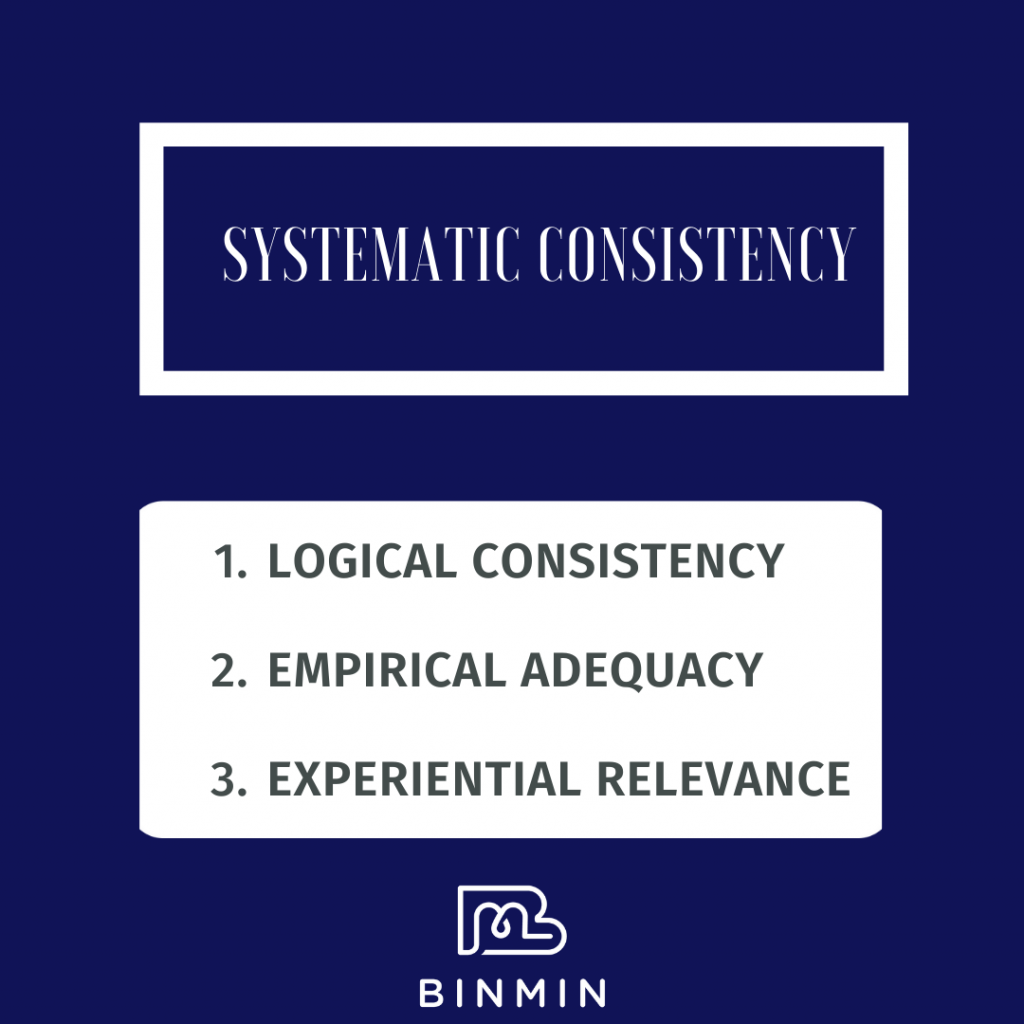 These three tests are:

Don’t be intimidated by these terms. They are simple to understand.

1. To Prove Christianity, it Must Be Logically Consistent

The first test to prove Christianity is logical consistency. That means the worldview that doesn’t have contradictions in its core beliefs. 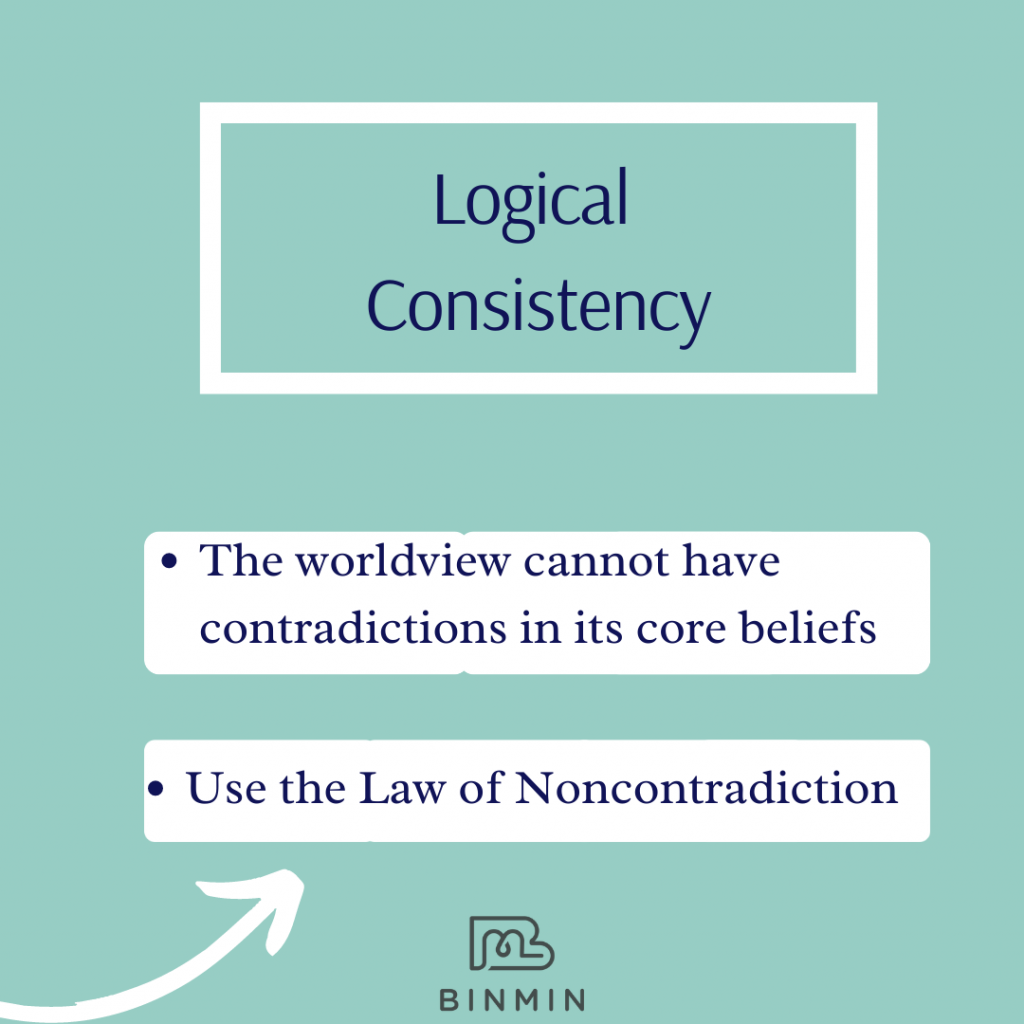 How to Spot Contradictions

To prove Christianity is the correct theistic faith, we need to be able to spot a contradiction.

So if opposites both claim to be true simultaneously and in the same way, that is a contradiction. And the statement is false.

For example, it is contradictory to say that my wife is 5’2” on today’s date and that she is also 8’10” on today’s date! Either one of those may be false, or both are false. But they cannot both be true!

Getting Negative (In a Good Way) to Prove Christianity

In essence, anytime a belief or a statement contains a contradiction, it is false.

For instance, consider the person who says, “I cannot speak a single word of English.” They contradicted themselves.

They spoke seven words of English to say they couldn’t speak a single word of English.

It is essential to realize that the LON has its limitations. Specifically, the statement or belief is false if you find a contradiction.

But on the other hand, if a statement is not contradictory, that does not mean it is true.

In effect, the LON can only tell you if something is false. In brief, if there is a contradiction, it is false.

So, the LON is called a “negative test” for truth. It can tell you what is false or not true (negative). But by itself, the LON cannot promise you that a non-contradictory statement is true (positive).

To illustrate, consider the following:

The second test to prove Christianity is empirical adequacy. This test considers the scientific and historical evidence about Christianity. 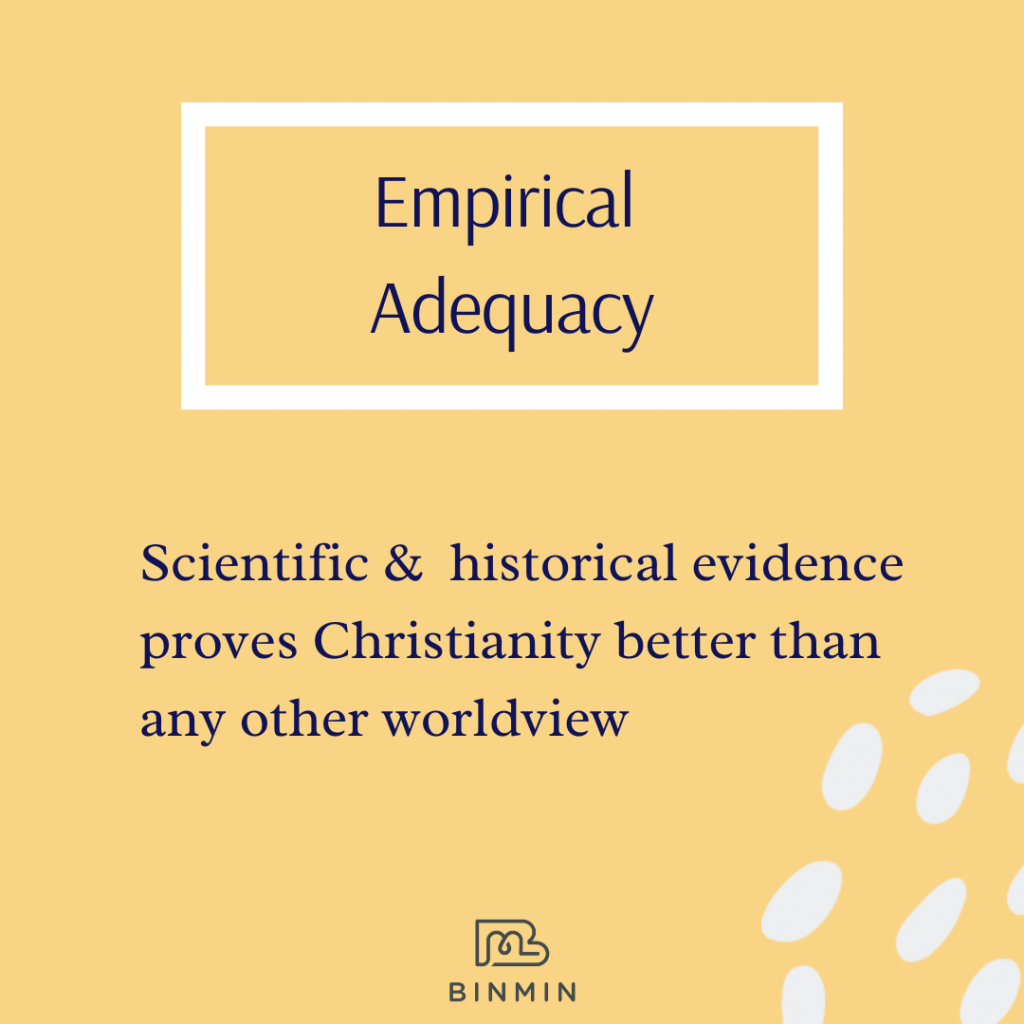 Example: Is the New Testament True?

The historical reliability of the Bible is essential to prove Christianity.

For example, does Christianity’s New Testament accurately describe what happened? Can we trust it?

Both Judaism and Islam deny the trustworthiness of the New Testament.

In contrast, the historically reliable records of the New Testament support Christianity. The New Testament books contain eyewitness accounts about Jesus. In addition, they include narratives about his’ sinless life, miracles, and resurrection.

The evidence for the historicity of the New Testament includes:

Furthermore, neither Judaism nor Islam can disprove the evidence of Christ’s resurrection.

Therefore, empirical adequacy supports the truthfulness of Christianity and not Judaism or Islam.

The test of experiential relevance asks:

The correct worldview will: 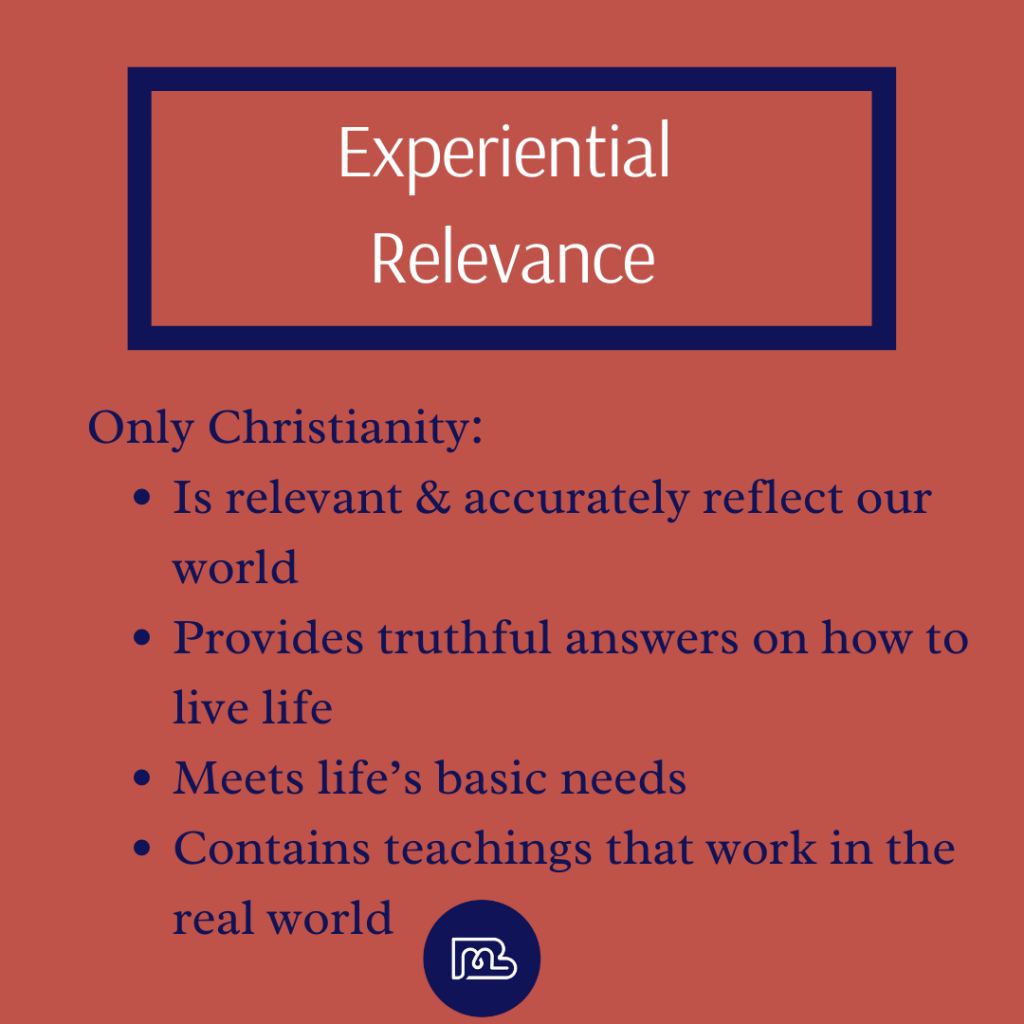 Example: The Problem of Evil

Consider Christianity’s response to one of the most challenging questions. How can an all-good and all-powerful God allow a world filled with evil?

What Now? Certainty vs. Probability

But we must humbly confess no test(s) can give absolute certainty like a mathematical equation. Systematic consistency can only offer an overwhelming degree of probability to prove Christianity. Why is that?

In light of this, we admit to not proving Christianity with mathematical certainty. But that is ok. No worldview offers a higher degree of probability than Christianity.

Instead, we have established Christianity as the true theistic religion using unbiased criteria.

Why Doesn’t God Give Us Absolute Evidence to Prove Christianity?

In brief, our decision to become a Christian comes down to faith. Faith is based on the work of the Holy Spirit and Scripture and not evidence.

Evidence only goes so far. Evidence gives us reason to believe that Christianity is true. But we still must place our faith in Jesus.

So, whenever you present evidence for Christianity (apologetics), always include the Gospel. And above all, be sure to present the Gospel in a culturally sensitive way.