To Prove Theism True: Show 6 Other Worldviews are Unaffirmable

How do we prove theism is true? Can this be done? Or is a belief in God just based on our feelings or how we grew up? 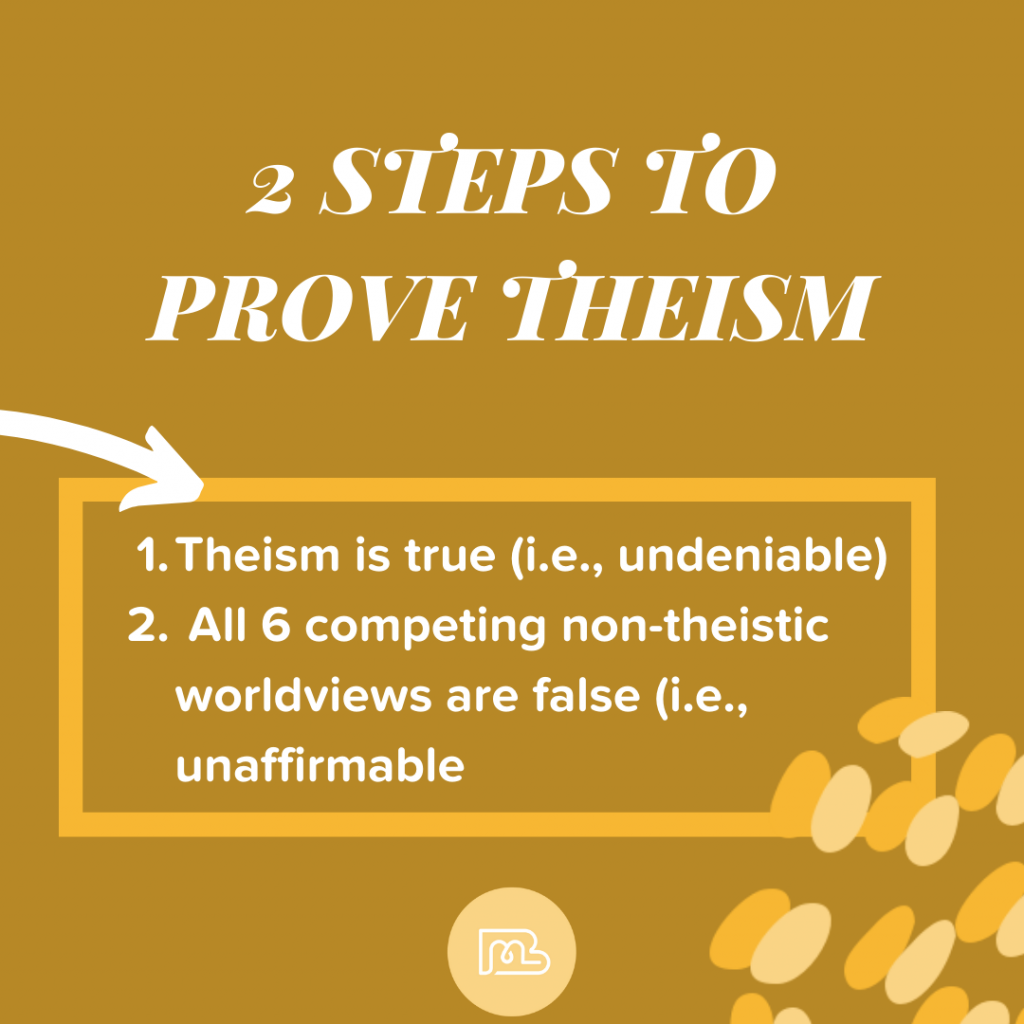 In a previous article, we began with our first of two steps.

The first step was proving that theism is undeniably true. Or said differently, you cannot deny theism’s truthfulness denied without contradicting yourself.

You see, it is one thing to prove theism is true. In other words, a theistic God MUST exist. And exist undeniably, but we also need to answer our critics from the other six worldviews.

And this is where the second step comes in.

The Second Step to Prove Theism is True: Show All 6 Non-Theistic Worldviews are False (Unaffirmable)

The second part proves that the six other worldviews are false because they have inherent contradictions in their core beliefs.

In other words, their core beliefs cannot be said to be accurate or are unaffirmable.

Don’t let the word “unaffirmability” intimidate you. It is a fancy way of saying that the statement or belief cannot be supported with evidence or that it contradicts itself. Or the more cliched phrase, “it shoots itself in the foot.”

A few examples will show you how easy the concept of unaffirmability is to understand:

Some statements are “directly unaffirmable.”

But some claims are “indirectly unaffirmable” and are a little harder to spot.

To discover these logical mistakes, we have to work harder. We may need to rephrase the statement or dig deeper into the meaning to find the contradiction.

Now let’s discover the second way to prove theism is true but showing how its competing six worldviews are all false or unaffirmable. We do that by exposing the contradictions in the other six worldviews.

To prove theism is true, we must become familiar with some logic, specifically contradictions. Contradictions are things that break the Law of Noncontradiction.

The Law of Noncontradiction (LON) is a philosophical principle we use daily. It merely states, “the opposite of true is false.” Every time you say, “That is true,” you mean its opposite is false and vice versa.

If you say the opposite of true is true, you are violating the LON.

Those are contradictory statements. Why? Because two opposite propositions cannot both be true, at the same time, and in the same sense.

Now let’s apply these things to prove theism is true.

A worldview would be unaffirmable if:

Here’s how all six of the other worldviews are “unaffirmable.” 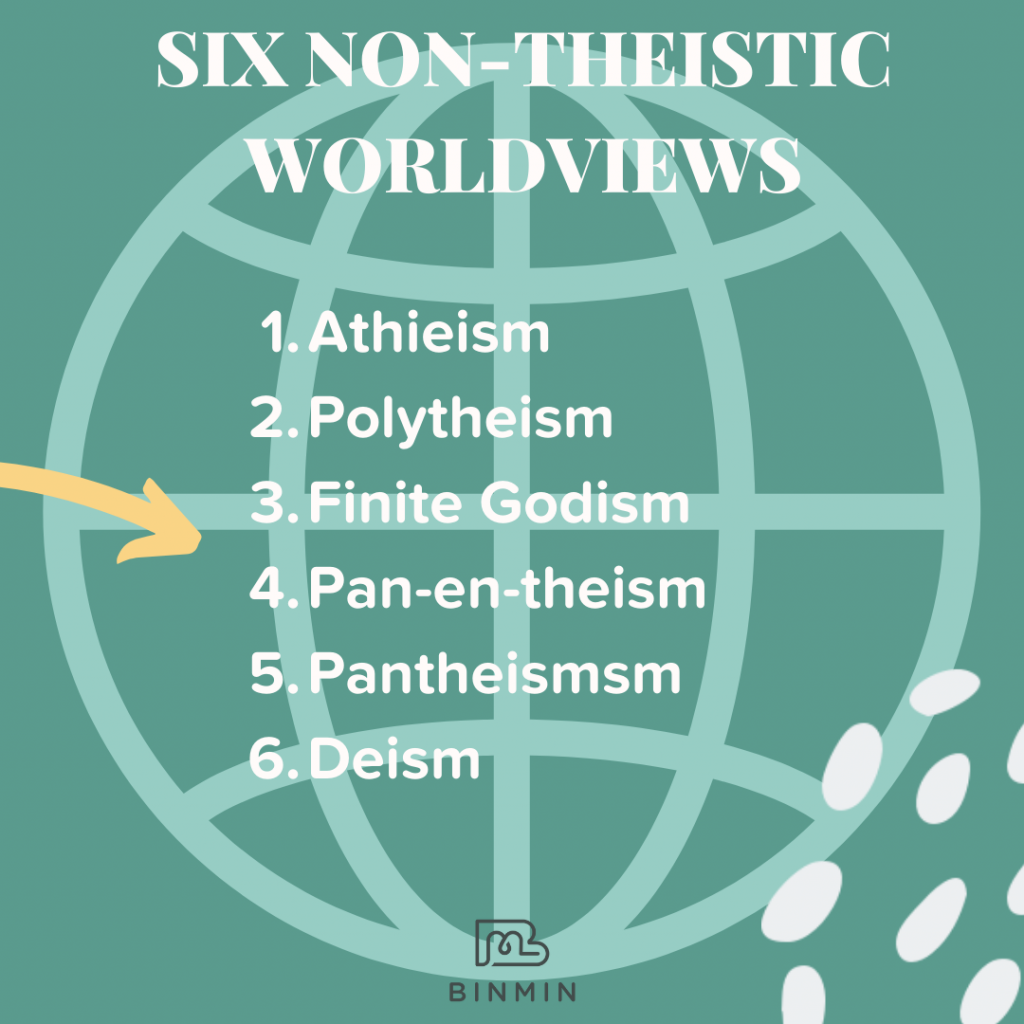 Atheism fails because it claims there is no God. But we have shown that a theistic God undeniably exists.

Many atheists believe that our finite universe has existed for an infinite number of moments in time. Others claim a series of infinite multiverses. In either case, they are wrong!

An infinite series (a series without beginning or end) or moment or preceding “multiverses” cannot exist in reality.

Similarly, an infinite number of causes for our universe or multiverses are impossible because they result in an “infinite regress.”

Polytheism, Finite Godism, and Pan-en-theism believe in a finite (or limited) god or gods. All finite beings, including finite gods, are limited. And the “Principle of Causality” demands that every finite being (effect) has to be brought into existence by a preceding cause.

Therefore whoever created these contingent and finite god(s) would be greater than them and qualify as the real God. Further, “finite gods” contradict the previous undeniable argument for an infinite and eternal God.

Deism’s belief in God is contradictory. How could a God who created the universe out of nothing be kept from doing more minor miracles like creating humans if he chose? That is not consistent.

The only remaining worldview–theism–is the only “affirmable” and correct worldview! The other six worldviews are false because they contain contradictions in their fundamental beliefs.

Did I prove theism is true for you?

Recognizing the reality of a theistic God is far more critical in our lives than disproving other views.

And if a theistic God exists, what should you do?

Firstly, t get to know him through Scripture

Secondly, realize  the terrible news that we can never please God by our good works

Thirdly, accept the good news that he loves us and can give us eternal salvation if we put our faith in Jesus.