Christian Salvation: 3 Stages of Fitting You for Heaven

“Christian salvation,” “justification,” “sanctification,” and “glorification”… what do they all mean?

For most new and young Christians, these terms are unfamiliar. At least they were for me. I remember hearing new words at church or Bible study, writing them down, and then going home to look them up!

Non-Christians do not know these unique Christian words and terms. The most common reason is that they are not used in common speaking as they once were.

And this “language gap” is only worsening since fewer people are growing up in the church. As a result, unchurched young adults are not familiar with many Christian-related terms.

Another problem arises when Christians use these terms in the wrong way. So what do these terms mean? What are the three stages of Christian salvation?

What is Christian Salvation?

The term “Christian salvation” distinguishes it from other works-based religions.

Salvation is the best thing that can happen to a human being.

But Christian “salvation” can be misunderstood as a one-time event. It’s not.

Instead, salvation is a three-phase sequence of justification, sanctification, and glorification. Using these terms without explanation is bound to confuse new Christians. 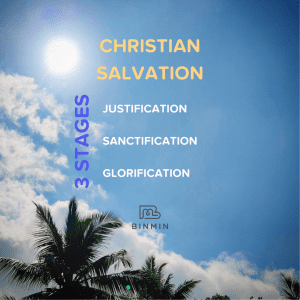 Christian salvation is God’s three-stage process of preparing his children for heaven.

There is another way to understand these three stages.

Justification is the first stage of Christian salvation. It is an instantaneous act of God when a person places their faith in Jesus.

Justification saves us from the guilt and record of our sins before God (Rom 8:1).

It is a legal (judicial) act because:

Christianity is unique among all other religions. It is the only religion that is not “works-based.” A works-based belief means you have to earn your way to rewards on earth to get to the afterlife.

Instead, Christianity teaches justification by God’s grace through faith:

It’s possible that “justification by grace” is confusing to you. So let’s break it down.

a.    Why is Justification Necessary?

Consider what happens if you break the law and get caught. A human court punishes you for your crime. Right?

But what if somebody took your punishment in your place? How would you feel towards them? You would be very grateful for their gracious act.

That’s grace. Grace is receiving a gift we did not deserve. Another way of saying it is that we receive an unmerited (unearned) favor (reward).

But suppose you break the law (sin) against an eternal, infinitely holy God? The consequences are eternal and infinite! As Adam and Eve found out when they sinned (Gen. 3:7), the results were three forms of death or separation.

Those three “deaths” were: 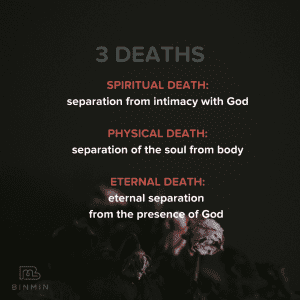 Because humans are finite and have sinned against an infinitely holy God, we are in a dilemma. Why?

Because we cannot do enough good works to appease God’s hatred of our sin. And we can never pay off our sin-debt by working our way into heaven.

b.    What are Spiritual and Physical Deaths?

After Adam and Eve chose to disobey God and sinned (Gen. 3:7), they felt shame and guilt for the first time. Their sin severed their intimate relationship with God.

They also began the process of physical death. Physical death is the soul and body separating from each other. And as a result of Adam’s sin, physical death affected all creation after him (Rom. 5:12).

d.    What Saves Us From These Deaths? Grace!

Consider how grateful you would be if someone took your punishment or paid your fine in a human court. How would you feel if someone could save you from hell and eternal separation from God?

Remember, humans cannot save themselves. So God chose to send Jesus as the perfect God-man to save humans from hell (John 3:16).

Jesus is both fully God and perfectly human. And he chose to sacrifice himself to atone for (cover) our sins and pay our sin-debt to God. God’s free gift of salvation is available to any human who puts his or her faith in Jesus (Eph. 2:8).

And since we aren’t worthy of this undeserved gift from God, it is all because of his grace.

At our justification, God, the morally perfect Judge, “declares” unrighteous sinners “not guilty.” Why? Because Jesus took on our sins and paid the penalty for them.

His death appeased God’s anger at sinful humans (Rom. 5:18). Christ’s sacrifice doesn’t erase our sins but instead covers or atones for them. Now when God sees us, he only sees Christ’s righteousness  (2 Cor. 5:21).

2.    Sanctification is the Second Stage of Christian Salvation

Sanctification is the second stage of Christian salvation. This stage delivers us from the present power of sin of the world (1 John 5:4), flesh (Rom. 7:24–25), and the devil (James 4:7).

Many Christians believe that salvation ends after justification. It doesn’t. It is only the beginning of our being “fit for heaven.” We still need to deal with our daily confrontation with sin.

Sanctification is a continual process. It is God making us righteous in the present.

3.    Glorification: The Final Stage of Christian Salvation is Going Home

At his Second Coming, Jesus will defeat Satan once and for all (Matt. 25:41; Rev. 20:10). Christ’s return brings the final stage of Christian salvation called our glorification.

Christian salvation is not a single event (justification). Instead, salvation is a three-stage chronology. These consecutive stages prepare us for heaven, where we will be in God’s presence forever.

Imagine someone rejecting Christ and choosing separation from God for all eternity. That thought is terrifying. As Christians, we know the truth. And we should want to share the gospel with non-Christians so they can experience salvation as well.

This week, thank God for his grace to you. God’s grace has saved you from a position of being judged. His grace is removing sin’s presence from your life. And his grace will put you in his presence forever. And you didn’t earn any of it. This is yours because of Jesus.

Binmin Podcast Ep. 12: End | What Questions Should I Ask About My Faith?

PrevPreviousDiscipleship Training: Four Resources For You
NextChristian Apologetics: 4 Main Views on How to Defend Your FaithNext