What is the Resurrection?

The resurrection of Jesus is the most crucial moment in history. So why do so many people think that it didn’t happen? Here are twelve undeniable facts that prove the resurrection.

The resurrection is Jesus’s return from the dead. He appeared in his physical, scarred, and glorified body, never to die again.

The best sources about the resurrection story are the Gospel accounts. The Gospels are the first four books of the New Testament. And these are historically reliable documents. 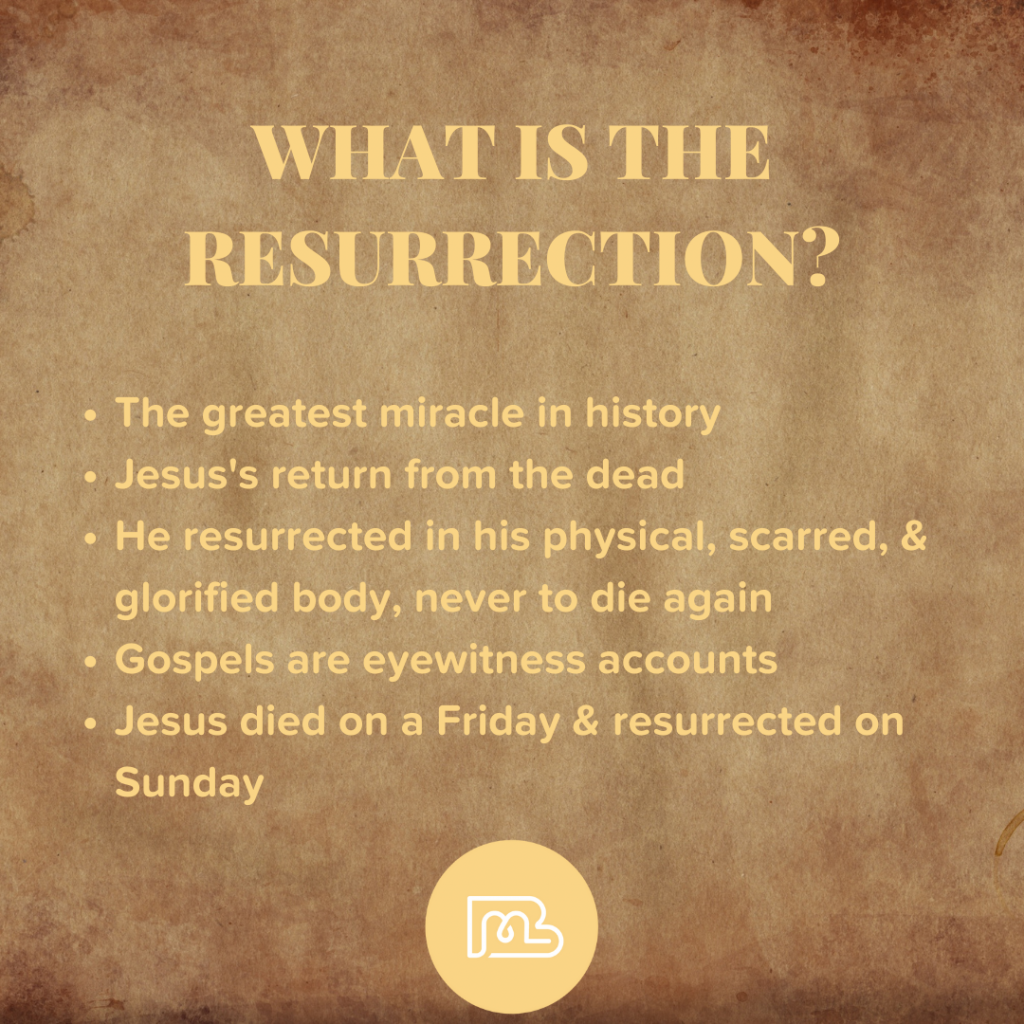 Why is Proving the Resurrection So Important? 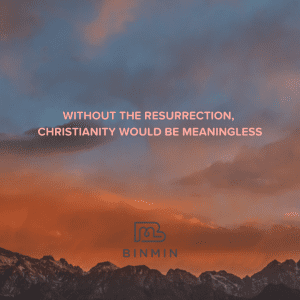 There are no valid arguments against the resurrection.

But is there evidence to prove the resurrection occurred? And could that evidence come from scholarly work?

When I Was an Agnostic

I was an agnostic during college, medical school, and the first of my three residencies. But I was an honest scientist. I willingly considered any worldview that seemed reasonable without bias or pre-judgment.

And when I was confronted with the indisputable evidence that Jesus is God and that he resurrected from the dead, I became a  Christian in my late twenties.

When harmonizing the four gospel accounts, they tell the complete story. Each gospel gives a different perspective. That difference in viewpoints indicates they are independent witnesses.

And independent witnesses support the truthfulness of the resurrection. There are no suggestions of conspiracy or collusion.

When putting together the four accounts, they tell the complete resurrection story.

So what do the full spectrum of scholars across the decades believe? What does history say happened? There is near-unanimous consent on these twelve historical facts that prove the resurrection. 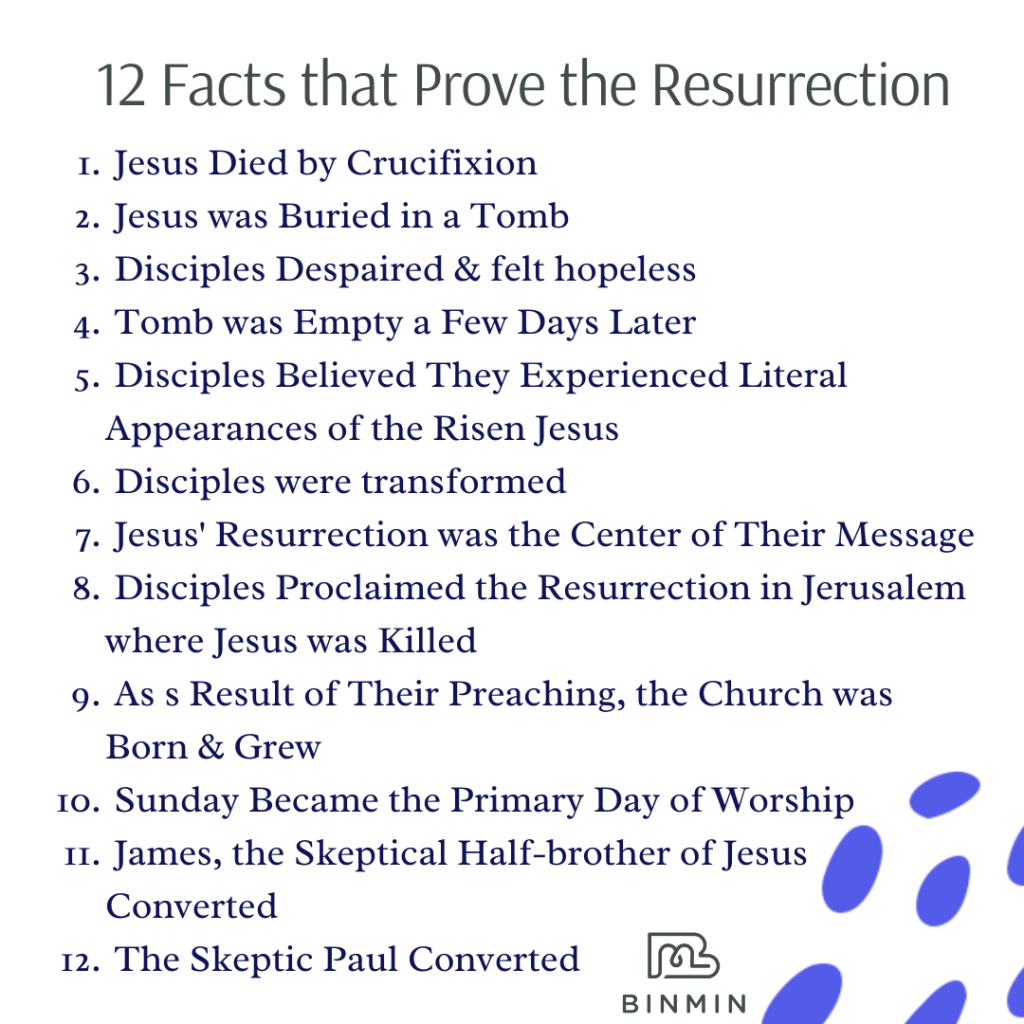 The nature of  Roman crucifixion assures death. Before his crucifixion, Roman “lictors“: flogged Jesus (Mark 15:24-41). They tortured him to the point of “half-death.”

Then crucifixion demanded the pounding of nails into his hands and feet. And he hung on the cross, slowly suffocating from nine in the morning until just before sunset (Mark 15:25, 33).

To ensure Jesus’s death, the governor Pilate had a Roman soldier stab his side with a spear (John 19:34). Then Pilate allowed Joseph of Arimathea to take Jesus’s body for burial (Mark 15:44–45). 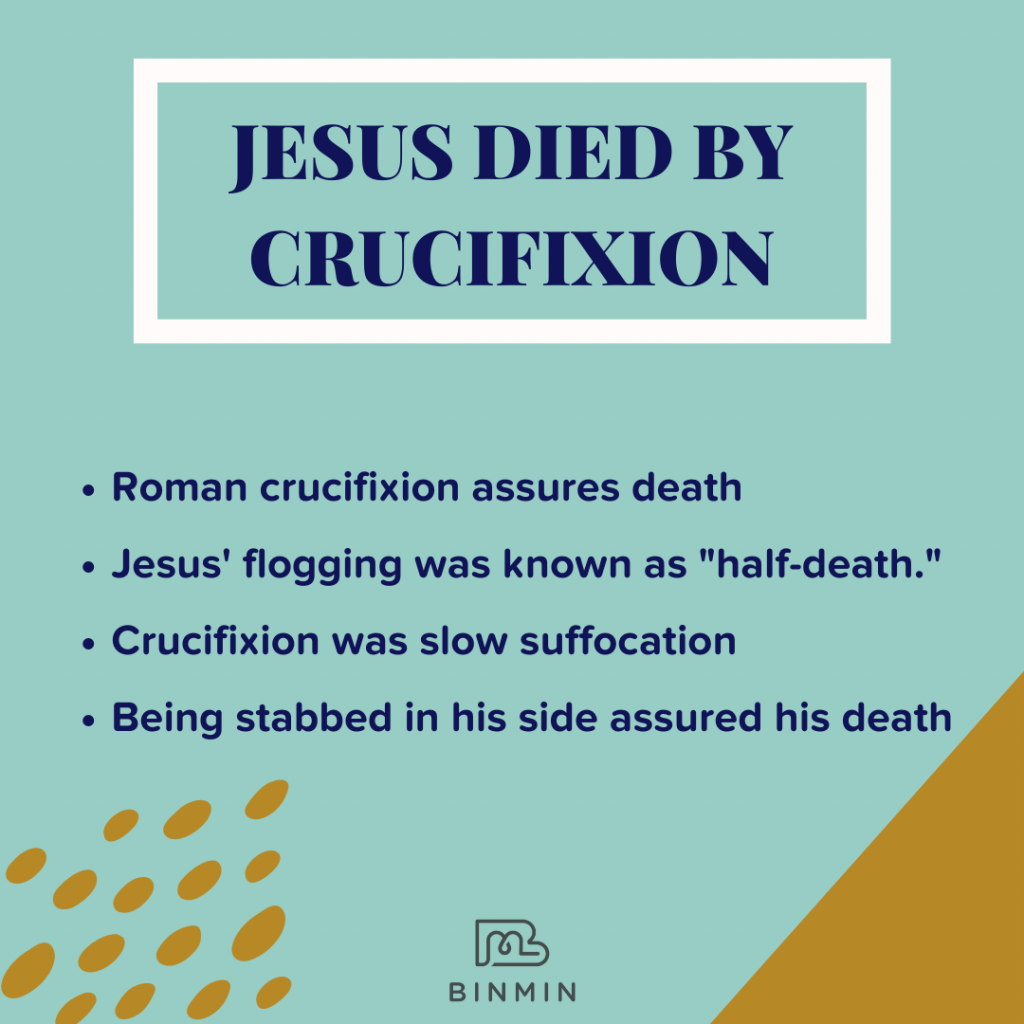 2. Jesus was Buried in a Tomb 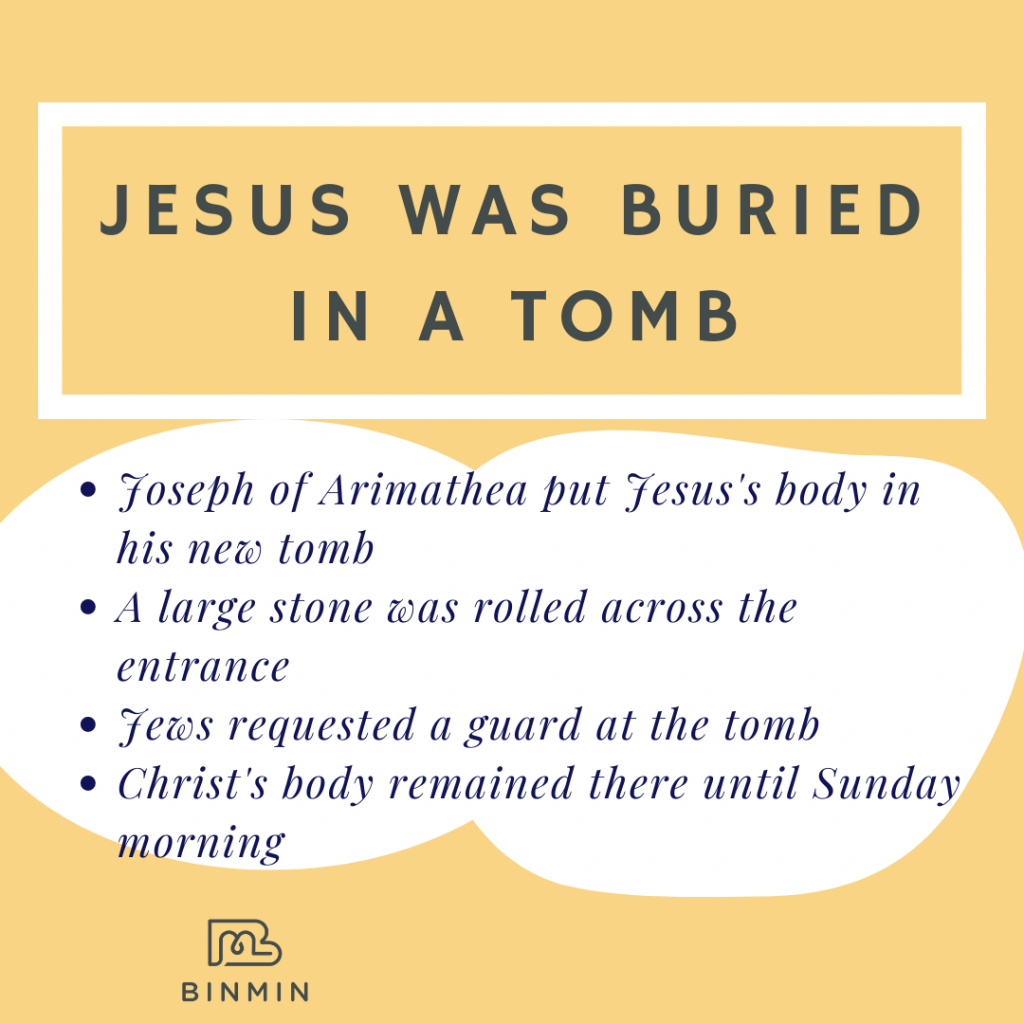 3. Jesus’s Death Caused the Disciples to Despair and Lose Hope, Believing That He Was Dead

The disciple’s desperation is understandable. Jesus’ shameful execution marked him as a criminal, a heretic, and a man accursed by God. 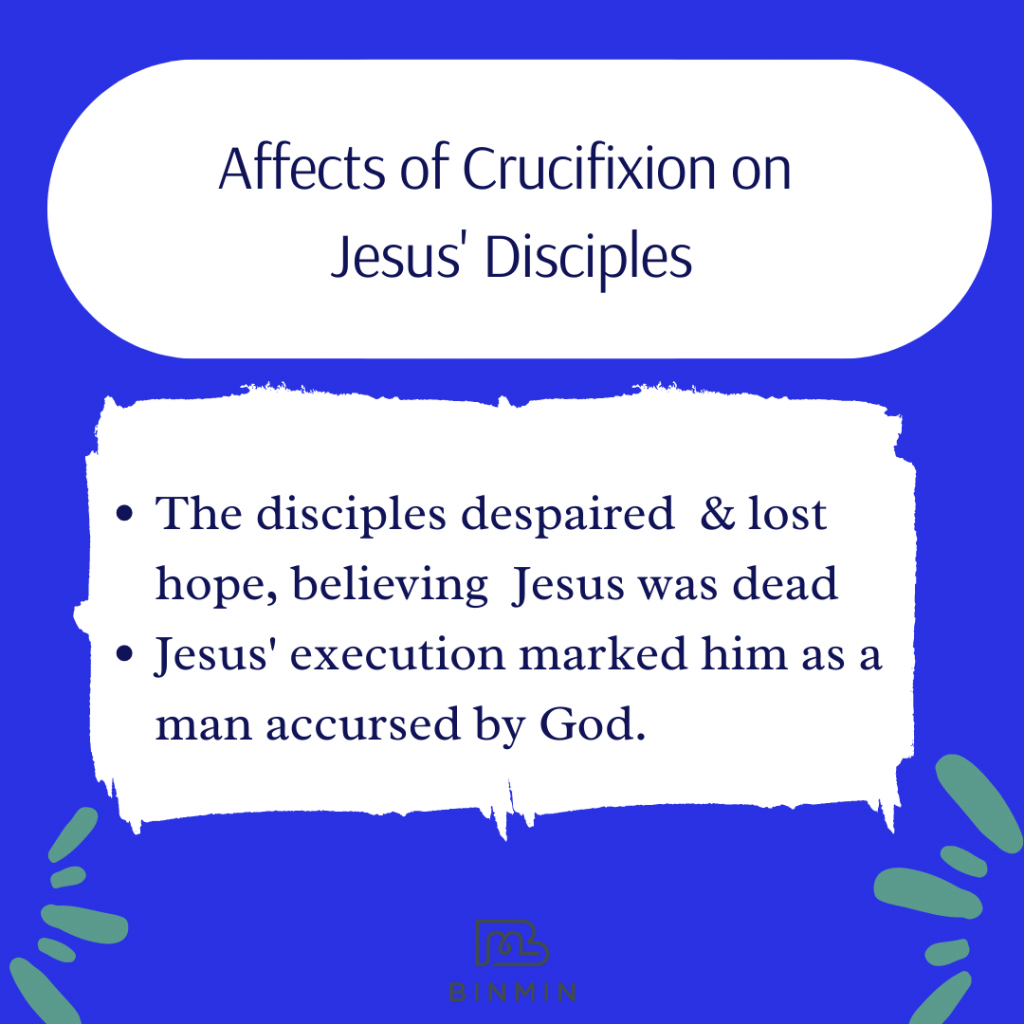 This point is not as accepted by scholars as much as the other eleven. But many scholars do believe that on Sunday, witnesses discovered Jesus’ tomb empty. 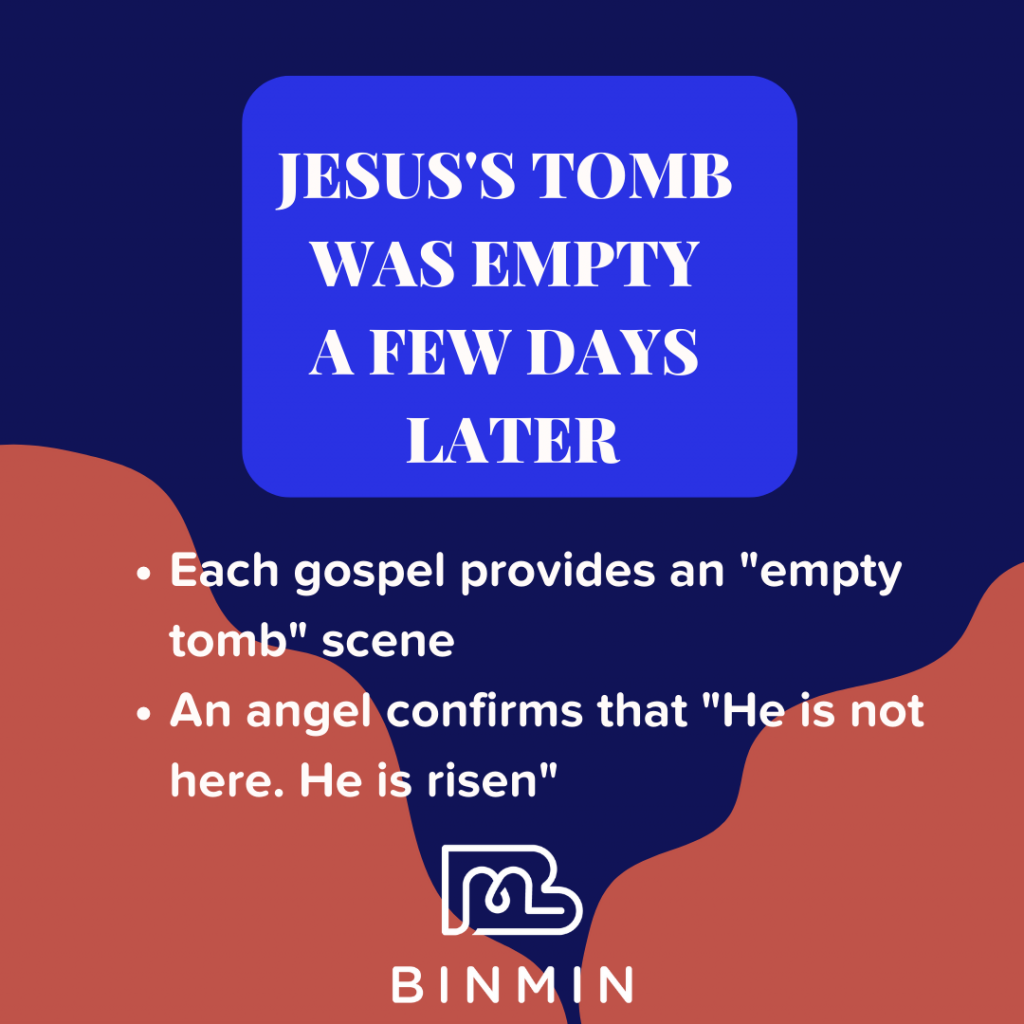 5. The Disciples Had Experiences Which They Believed Were the Literal Appearances of the Risen Jesus 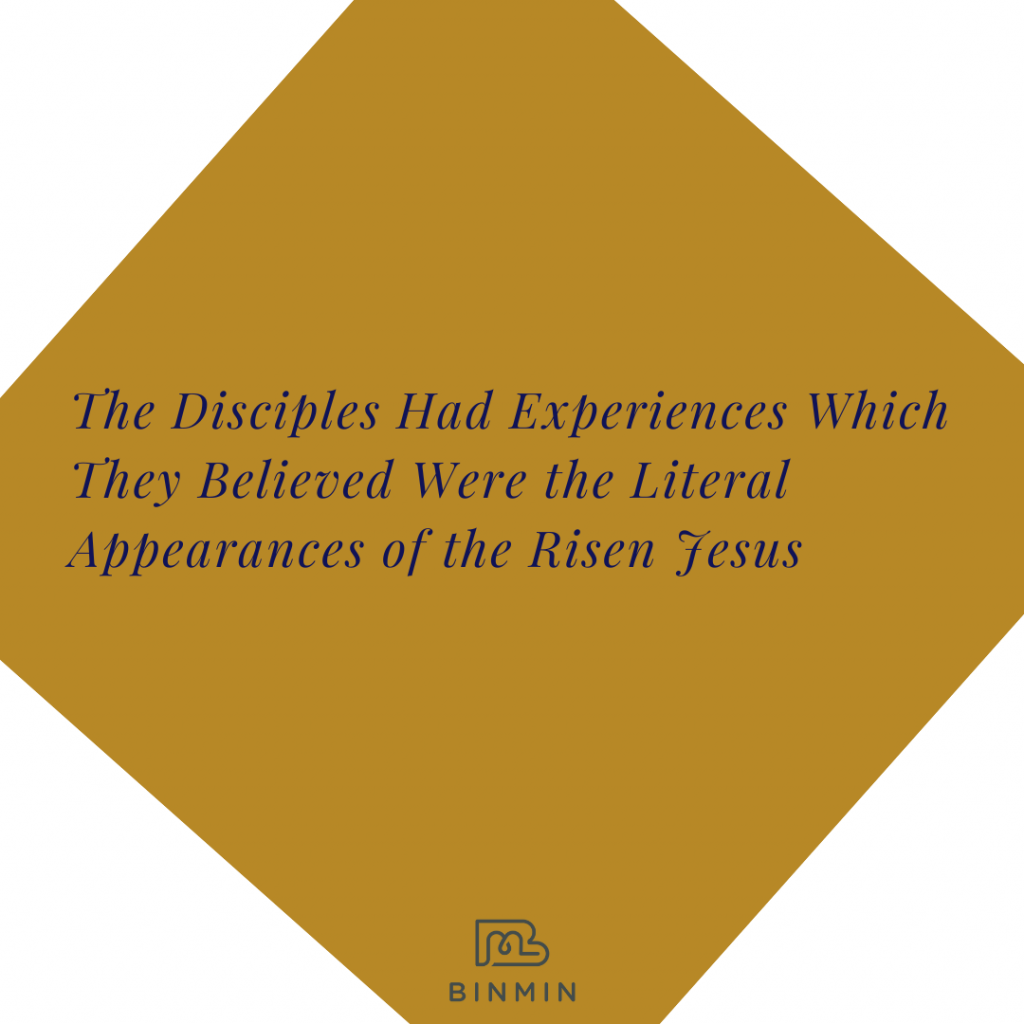 6. The Transformation of the Disciples

The transformation of the disciples resulted from their experiences with the risen Lord. They went from doubters (John 20:19) to fearless proclaimers of Jesus’s resurrection. They even died for their faith. 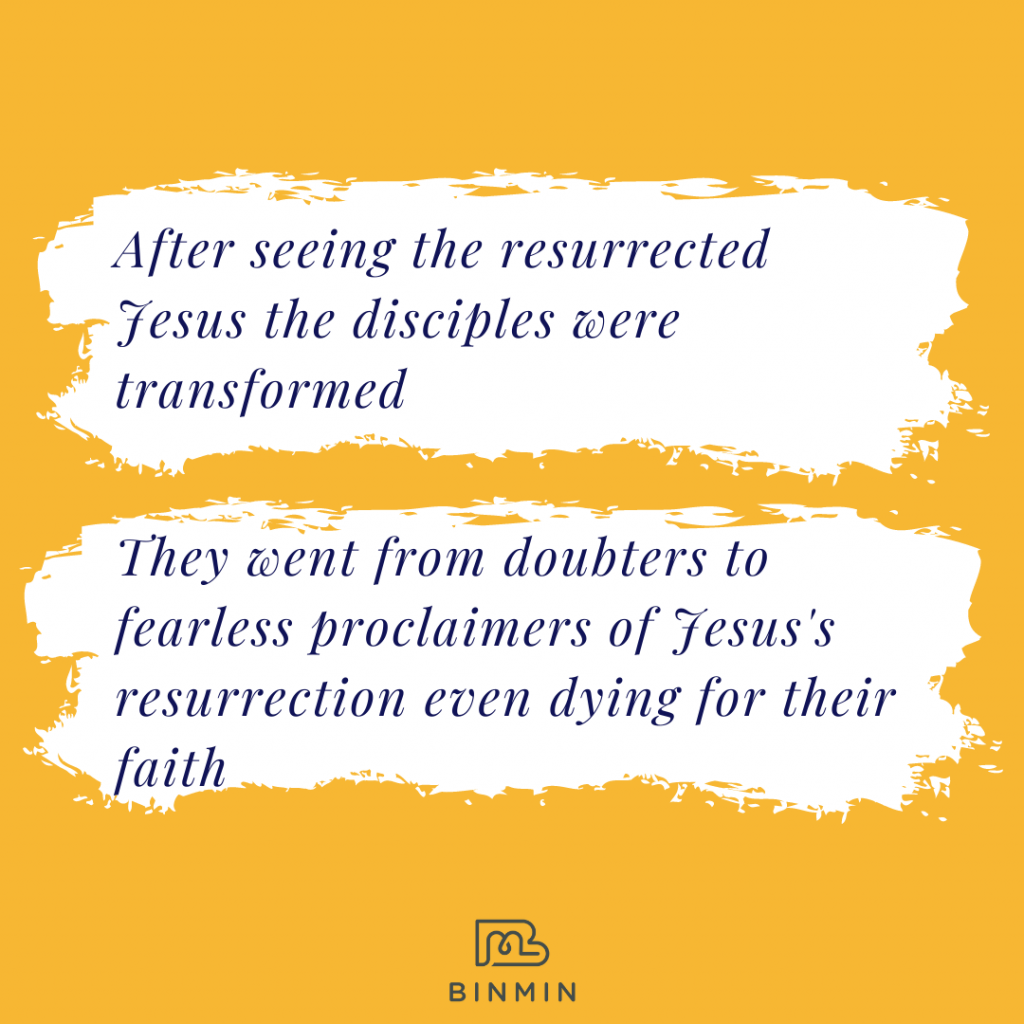 7. The Resurrection of Jesus Was the Center of Their Message

Christ’s resurrection was the subject of Peter’s first sermon at Pentecost (Acts 2:22–40). His following address was at the temple (Acts 3:14, 26) and then before the Jewish Sanhedrin (Acts 4:10).

Everywhere the apostles went, they preached the resurrection of Jesus (Acts 4:33; Acts 4:2). 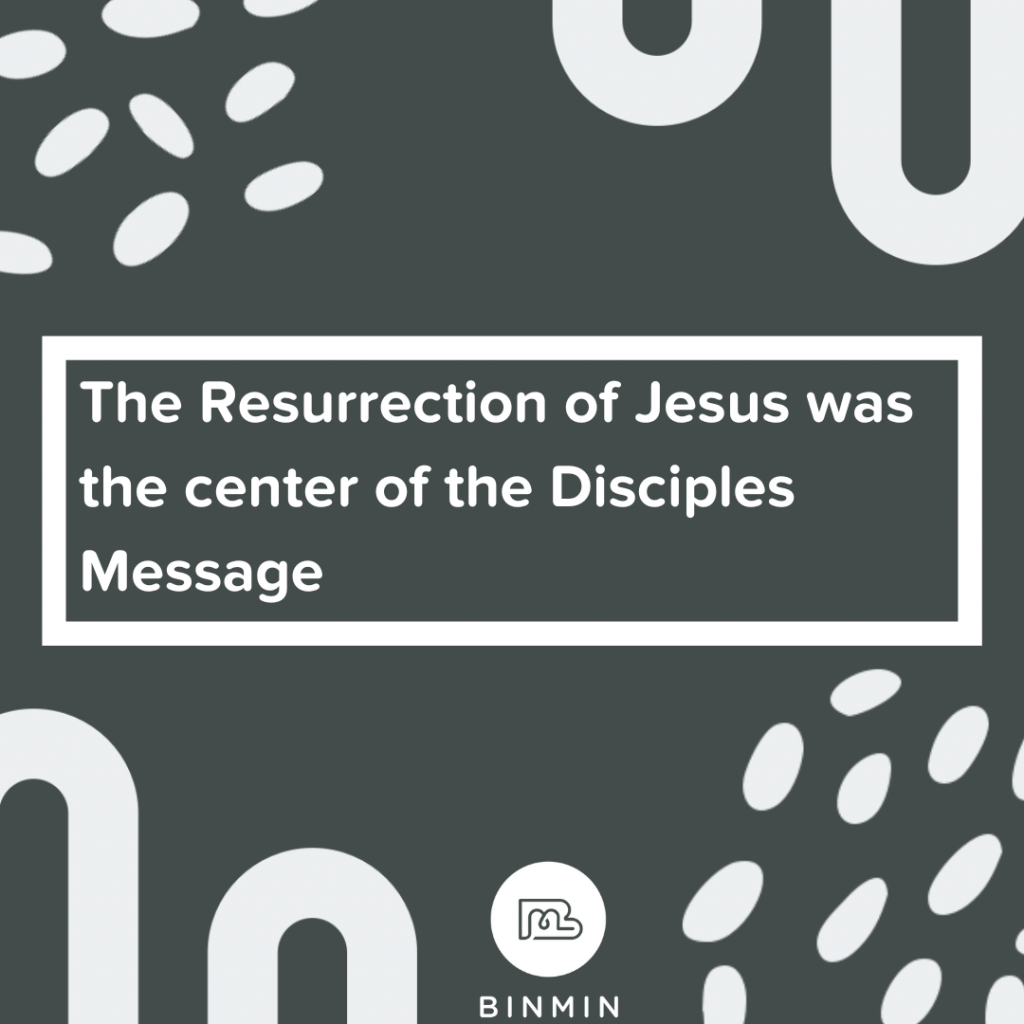 8. The Disciples Proclaimed the Resurrection in Jerusalem where Jesus was Killed

Jesus was killed and buried in Jerusalem. And it was here where the apostles told others about his resurrection (Acts 19:39).

The apostles had repeated confrontations with the Jewish authorities. These Jewish leaders could not produce the body, nor did they even organize a search.

Instead, these leaders bribed the soldiers who had guarded the tomb to lie (Matt. 28:11–15). The actions of the Jewish leaders show that the tomb was empty. 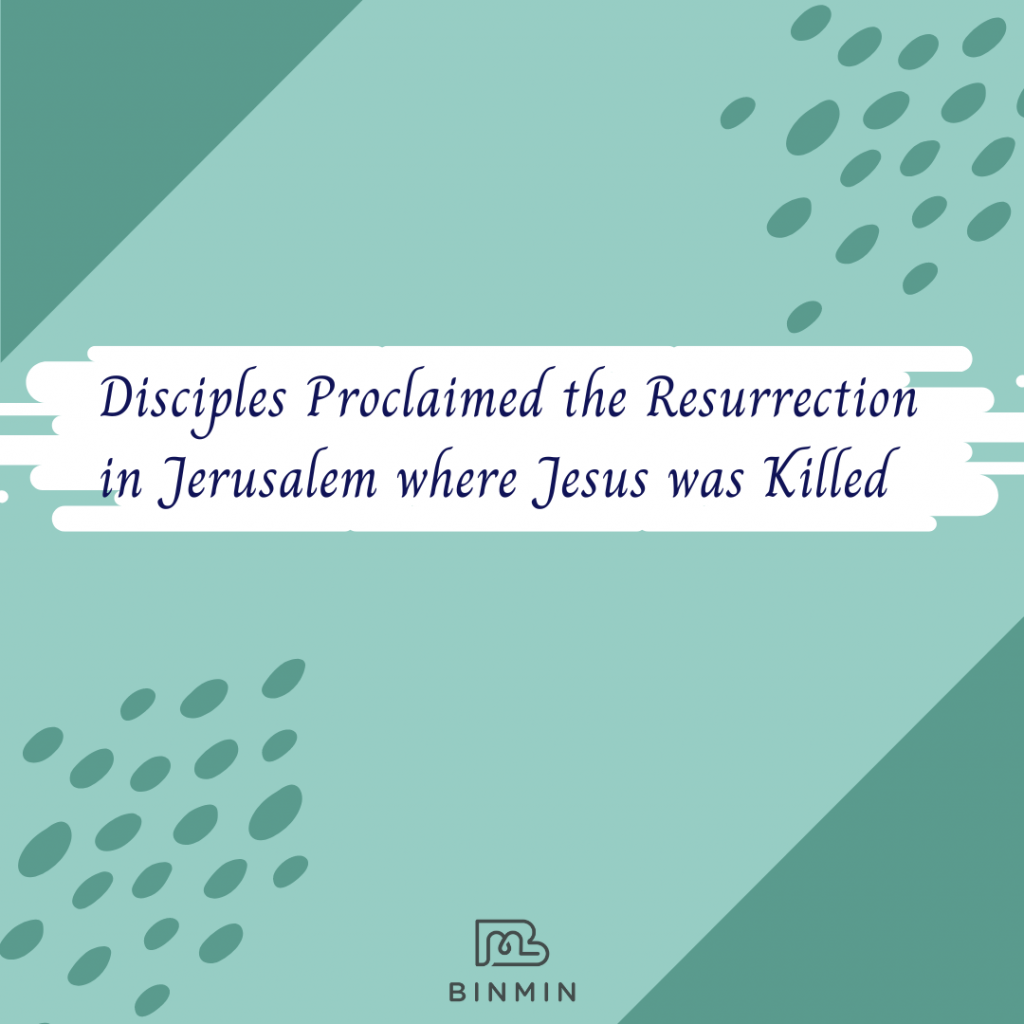 9. As s Result of Their Preaching, the Church was Born and Grew

There are lots of good reasons why the Church should never have started! For instance, the first church was predominantly made up of Jews. Jews are monotheistic (Deut. 6:4), yet they proclaimed that Jesus (a man) was God.

Also, there was a host of problems almost immediately. The difficulties included persecution, threats, and death (Acts 7:57-60).

Yet salvation came to 3,000 people when Peter preached in Jerusalem (Acts 2:41). And the numbers of new Christians swelled daily (Acts 2:47).

Within days, 2,000 more became believers (Acts 4:4). The number of disciples increased rapidly. As a result of the growth, care for the widows fell to appointed “deacons” (assistants to the church leaders) (Acts 6:1). 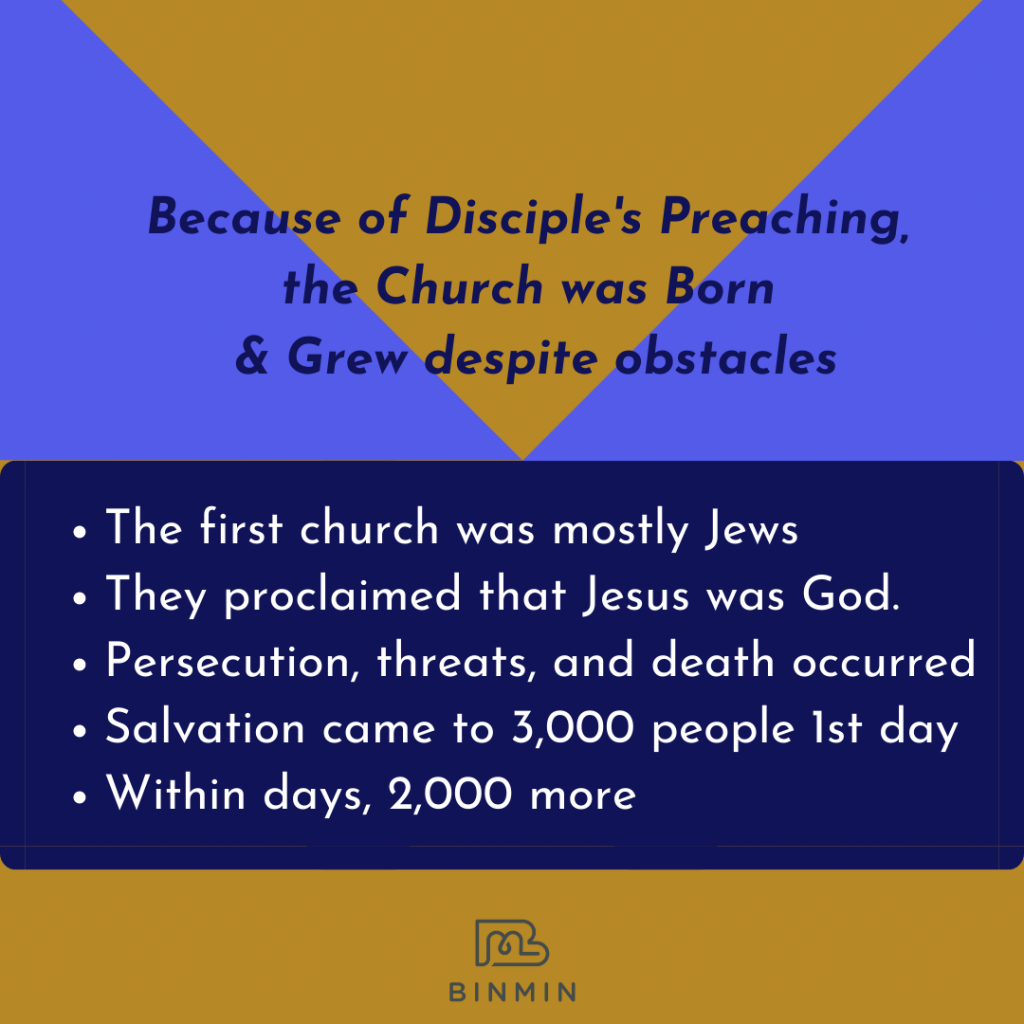 10. Sunday Became the Primary Day of Worship Instead of the Jewish Sabbath On Saturday 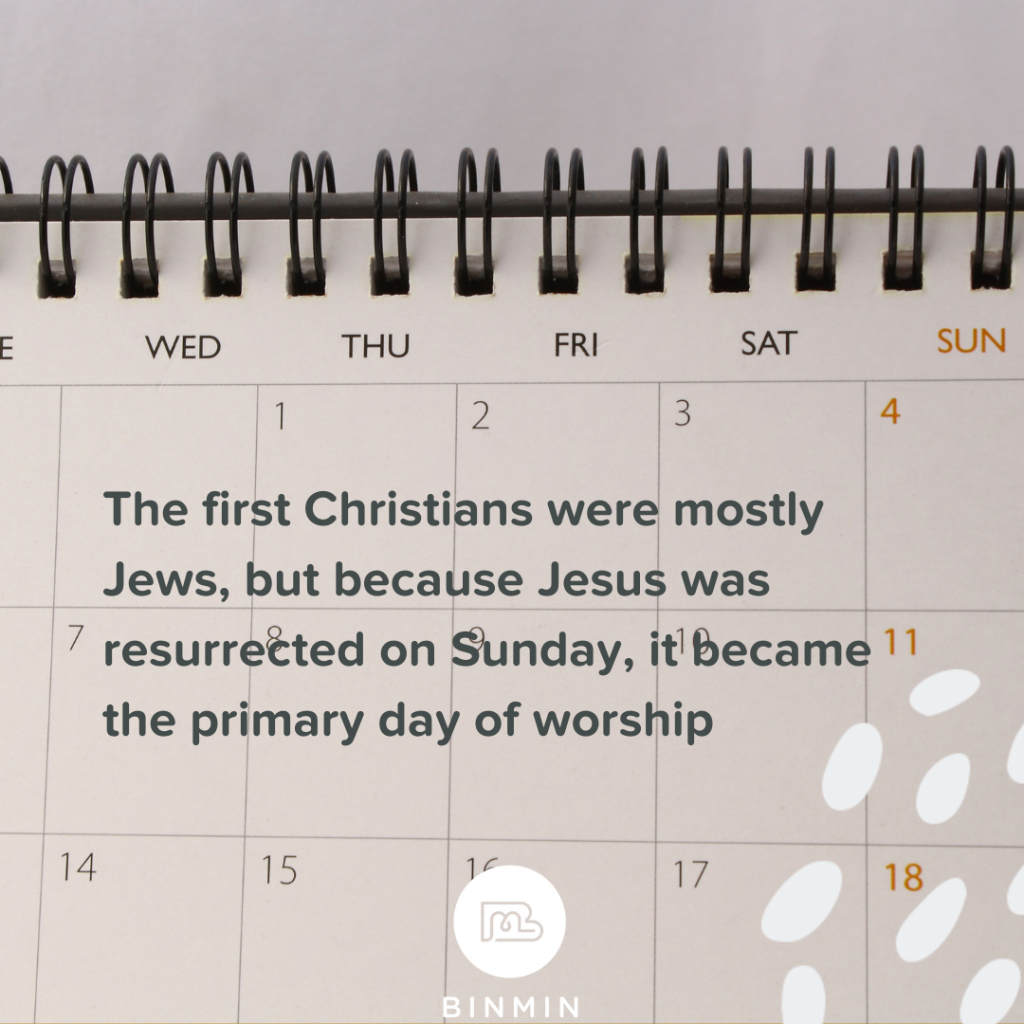 11. James, The Half-brother of Jesus, Had Been a Skeptic but Converted

Before his resurrection, Jesus’ half-brothers were unbelievers (John 7:5). But after James saw the resurrected Jesus, he converted (1 Cor. 15:7).

James became an early church leader in Jerusalem (Acts 15:13). He wrote the New Testament book that bears his name and died for his belief in Jesus. 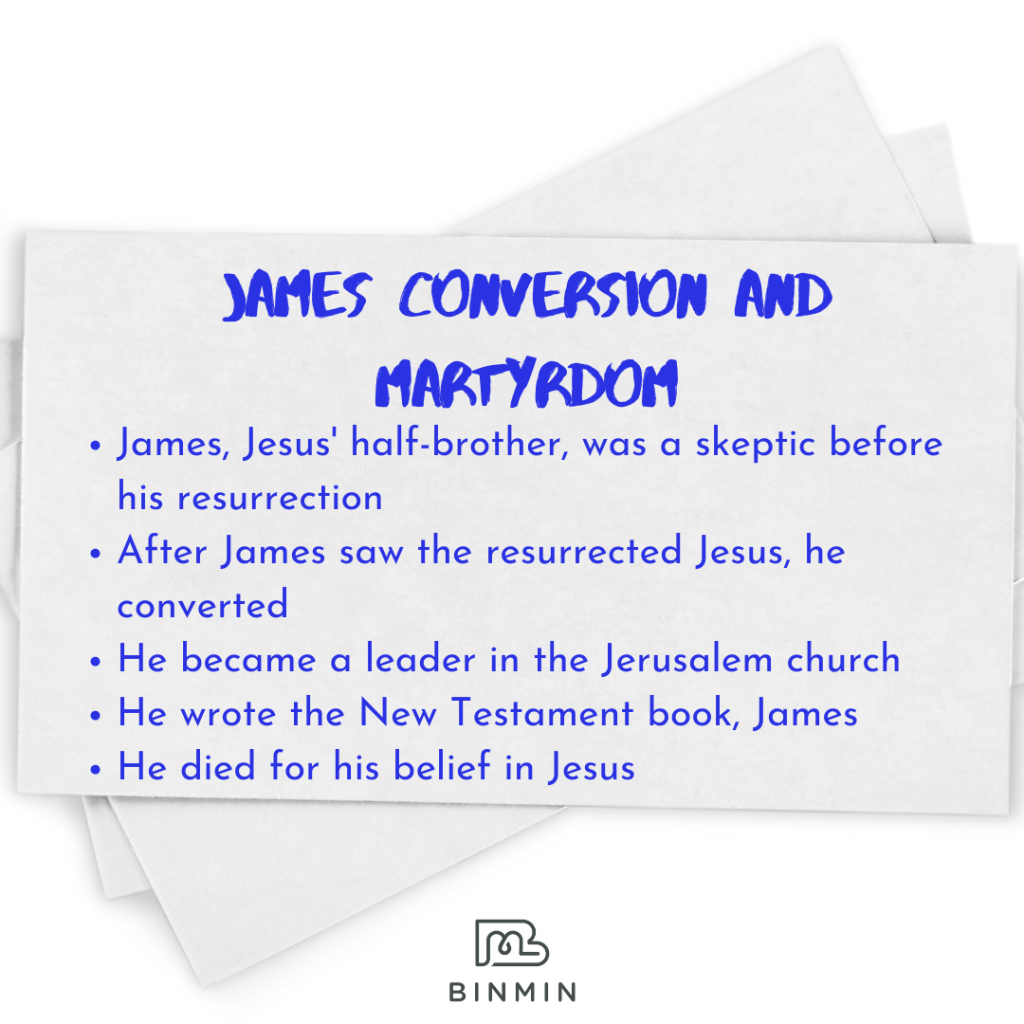 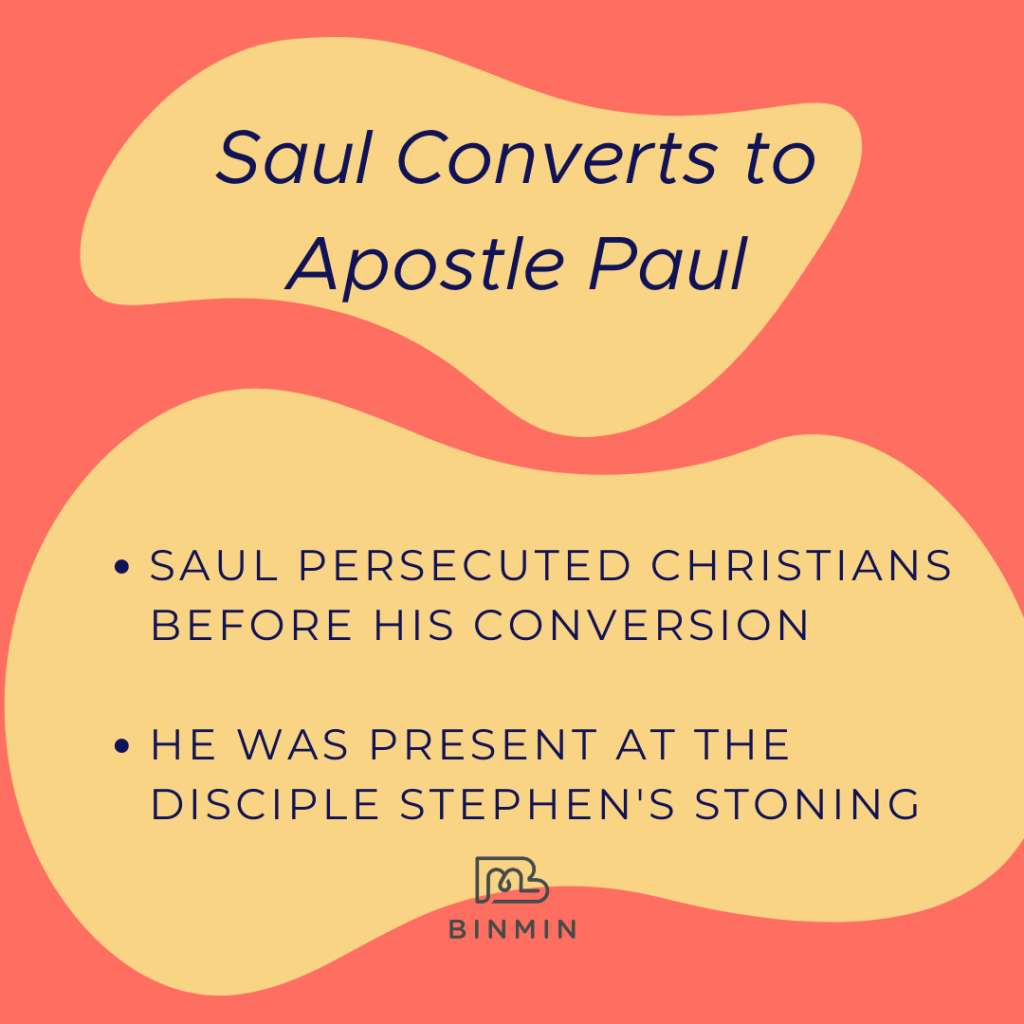 From these twelve facts, Dr. Habermas has identified a minimum fact argument. These are four “core” facts that prove the resurrection is true. 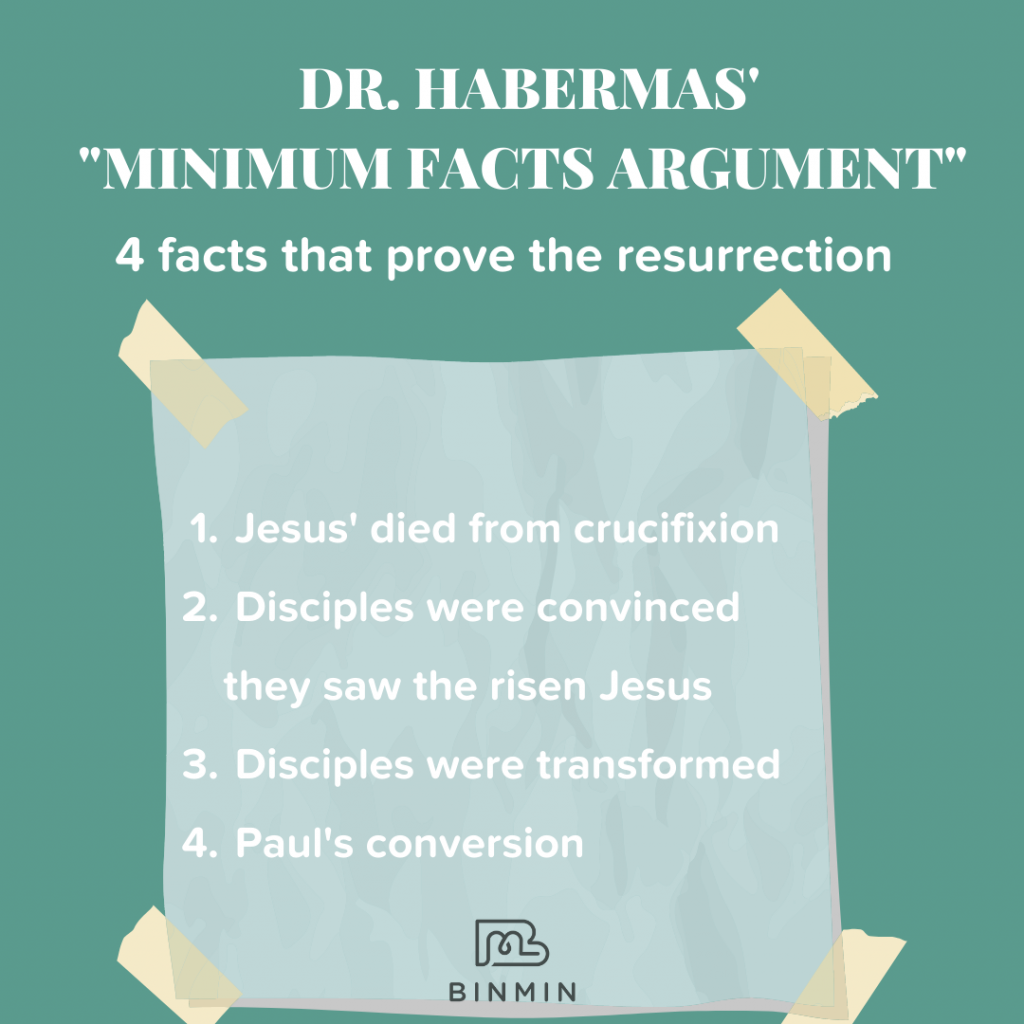 The four facts that prove the resurrection are:

So, where does this historical evidence lead us? The resurrection is indisputable!

We have presented twelve undeniable facts to prove the resurrection occurred. And scholars are in near-unanimous agreement on these facts.

We have some rock-solid evidence that Jesus was resurrected from the dead. History and the Bible prove the resurrection. And this changes how we see Jesus.

How Do We See Jesus?

How do you see Jesus? Is he a helpful teacher to listen to occasionally? Or is Jesus the risen King in heaven ready to save anyone who trusts him?

Because of the resurrection, we need to see Jesus as the only one who can save people from their sins (Rom. 10:13) and the only one worth worshiping.

PrevPreviousDemolishing Arguments Against the Resurrection
Next5 Truths for Understanding the TrinityNext