6 Facts About Christian Apologetics (Pre-Evangelism) You Must Know!

Christian apologetics is one of our greatest privileges.

But what is apologetics or pre-evangelism? There are six facts that every Christian should know when it comes to apologetics. 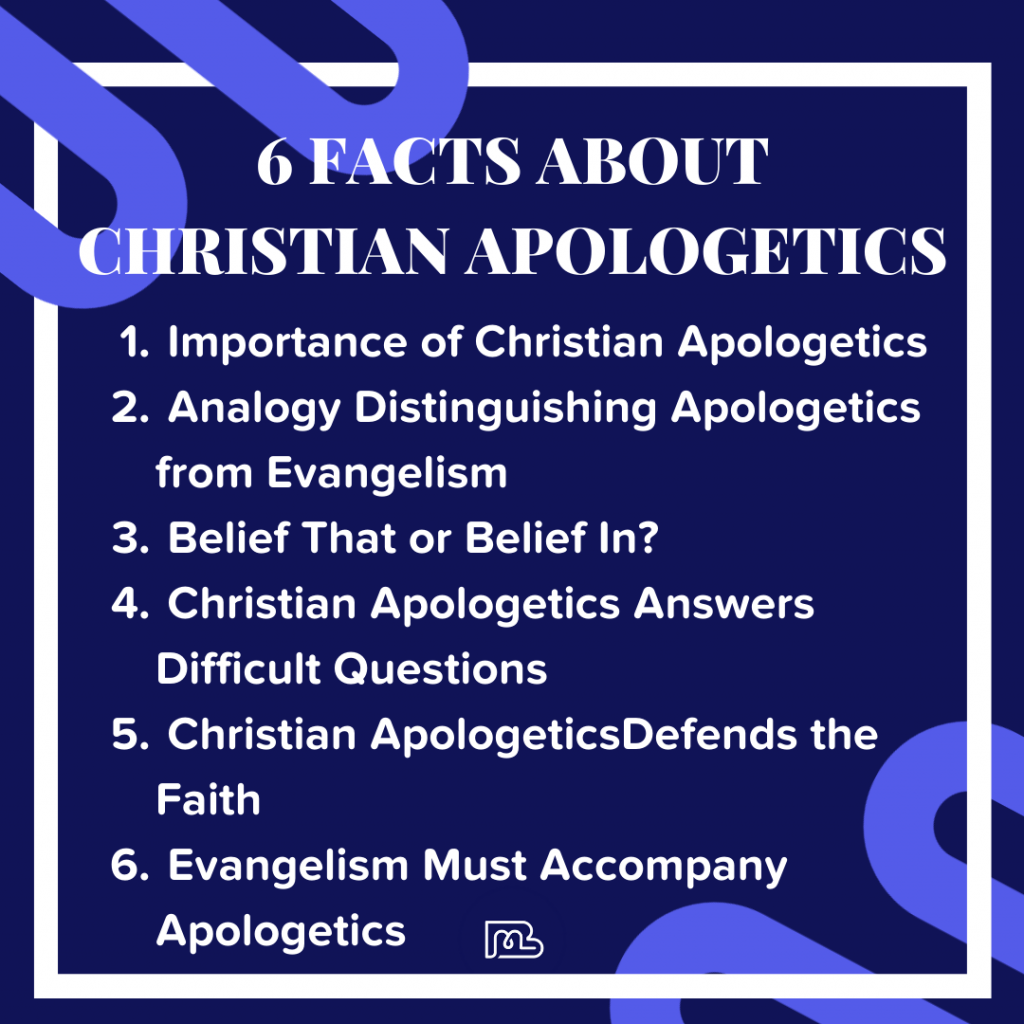 Christian apologetics is so important because:

And why is Christian apologetics so important?

By comparison, Christian apologetics is not the same as evangelism. However, as the name implies, pre-evangelism works in concert with evangelism.

As a result, Christian apologetics encourages believers to witness their faith.

2. An Analogy to Distinguish Christian Apologetics from Evangelism

As an illustration, imagine being on one side of the 1,300-foot-tall Niagara Gorge. You are with a vast crowd in the summer of 1858. You and the masses are electrified.

There is a hemp tightrope only 2 inches wide strung across the gorge. Below is the rapidly flowing Niagara River that leads to Niagara Falls.

On the other side of the gorge is a French acrobat stage named “The Great Blondin.”

You hold your breath to the point of feeling faint as Blondin walks backward, lies down, and does somersaults on the tightrope. He uses a camera to take pictures and even pushes a wheelbarrow across the vast distance.

You join the 25 thousand spectators cheering and clapping when he arrives on your side.

But what if Blondin looks directly at YOU and asks, “Do you think I can put you on my back and carry you across?” You are so caught up in the excitement you answer, “Yes!”

It is one thing to ask you if you “believe that” he can carry you across.

It is entirely different asking you to “believe in” him carrying you safely across. As a result, you refuse his invitation.

Why? Because you do not have enough faith in him to be successful.

However, one man, Harry Colcord, Blondin’s manager, did “believe in” him.

As a result of his faith, Blondin successfully carried Harry across the gorge.

So what is the point of the story?

How does this relate to apologetics and evangelism?

There is a difference between the “belief that” something is true. Compared to a “belief in” or putting your “faith in” something.

This story shows the contrast between reason and faith.

This difference is critical. Specifically, it distinguishes between apologetics (reason) and evangelism (faith).

The story shows that it is possible to “belief that” something is true. But not “believe in” it.

Consequently, you “believed that” Blondin could accomplish the remarkable feat.

Regardless, putting your life in his hands requires faith. And in light of that, you did not “believe in” him.

Why is that distinction between reason and faith so important?

Undoubtedly, most Christians know the term “evangelism.” It is sharing the gospel of Jesus with non-Christians. Consequently, allowing them to place their faith in Jesus.

However, if you frequently evangelize, you know that some non-Christians ask challenging questions.

Indeed, it is vital to have answers to these questions. Furthermore, there are excellent answers for the most inquiring mind.

And for this reason, it is never appropriate for Christians to ignore sincere seekers.

In particular, there are two inexcusable responses addressed to Christian inquirers.

As a matter of fact, many young adults leave Christianity because of these responses.

Conversely,  Christians must always be ready to give a defense of their faith (1 Pet 3:15). This discipline is called apologetics or pre-evangelism.

In brief, apologetics answers questions of why Christianity is the only correct worldview. Additionally, it defends Christianity against other worldviews (such as atheism and pantheism).

Firstly, evangelism is sharing the “good news” or gospel of Jesus Christ. Undeniably, it alone leads to faith or “belief in” Jesus. Overall it relies on the Holy Spirit and the Bible.

In contrast, Christian apologetics (pre-evangelism) uses reason and evidence. In particular, it defends and argues for the “belief that” Christianity is true.

Let’s return to the story of the “Great Blondin.”

Unquestionably, you “believed that” he could carry a man on his back across Niagara River.

On the other hand, you did not have enough faith to “believe in” him to carry YOU safely across.

In evangelism, a new Christian “believes in” Jesus. Due to that, salvation comes through our placing our faith in Christ. Nor is this gift of God through any work on our part. Most importantly, it is a gift from God because of his grace towards us (Eph. 2:8) and the work of the Holy Spirit (John 6:63; Titus 3:5).

Instead, reason and evidence are the prevue of pre-evangelism. Christian apologetics only leads non-Christians to “believe that” Christianity is true. But this knowledge is insufficient for salvation.

Without a doubt, in witnessing opportunities, you will only need evangelism. In this case, allow the Holy Spirit and Bible to work on the non-Christian.

So long as you use apologetic reasoning, evangelism must always accompany it.

As a Christian, take time to learn the evidence for Christianity’s truthfulness. And follow our tips for apologists. Then humbly dialogue with those who don’t yet believe. But remember that culturally and situationally sensitive evangelism should always accompany apologetics.

If you are not a believer, investigate answers to your questions about Christianity. And learn why Christians claim that their faith is the only correct worldview.

PrevPreviousInterpreting Scripture By Investigating with the C.I.A. Method
Next7 Reasons Christians Must Be Culturally EngagedNext