7 Reasons Christians Must Be Culturally Engaged

Undoubtedly, Dr. Bruce R. Ashford is correct that Christians should be culturally engaged. In fact, we cannot avoid interacting with the world around us. Let’s consider several questions. For example:

Here are 7 Reasons Why Christians Should Engage Culture 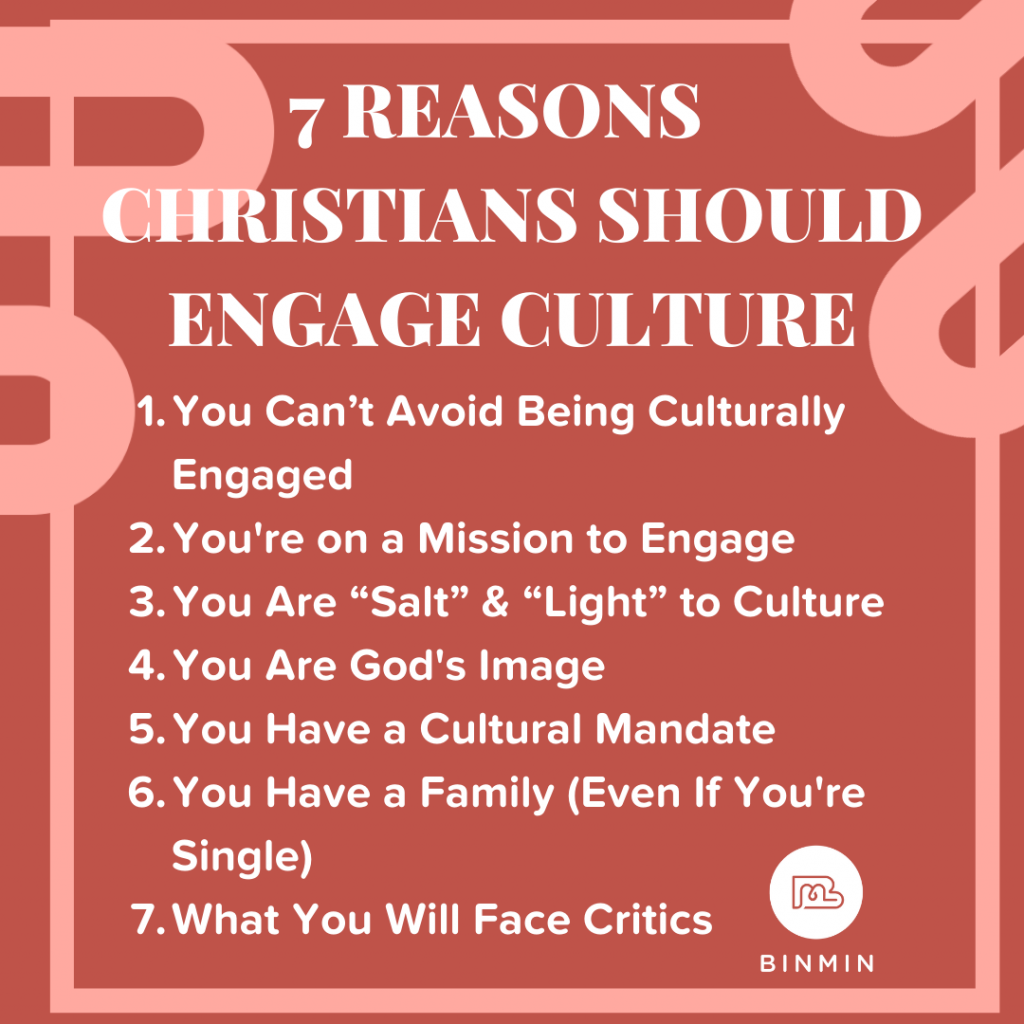 Undeniably the world around us is less Christian. With the result being, our post-modern world is increasingly without hope or meaning. Moreover, it lacks absolute truth or moral absolutes.

That is a critical reason Christians should be culturally engaged.

And it is not an issue of “if” we should be culturally engaged. But “how” we interact with others.

As Pastor Timothy Keller has written, Christian cultural engagement needs to be sensitive and aware. Furthermore, we need to act with discernment within a post-modern society.

To illustrate my point, consider the following story.

A Diet That Destroys Unsuspecting Victims

Once a farmer thought that the oats that he had been feeding his mule cost too much. So he started mixing a little sawdust with the feed. He increased the sawdust each day because the mule didn’t seem to mind. Finally, the farmer fed the mule only sawdust without any oats. A few days later, the mule fell over dead.

For more than three decades, I have known many young adults from 18-28 years old who began with a desire to serve God.

But like the mule, they have been given an ever-increasing diet of sawdust. In other words, they became increasingly immersed in the non-Christian culture.

Constant engagement with sin led only to a diet of secularism’s useless food. As a result, they lost their spiritual nourishment.

Coupled with abandoning their faith, they died spiritually.

What Do We Mean by “Culture”?

Before discussing cultural engagement, let’s start with some definitions.

“Culture” is a particular way of life. It includes tradition, beliefs, behaviors, values, and objects shared by a specific group.

There are several elements of culture. For instance:

Cultural engagement means our involvement in each of these elements.

What is Secular Culture? 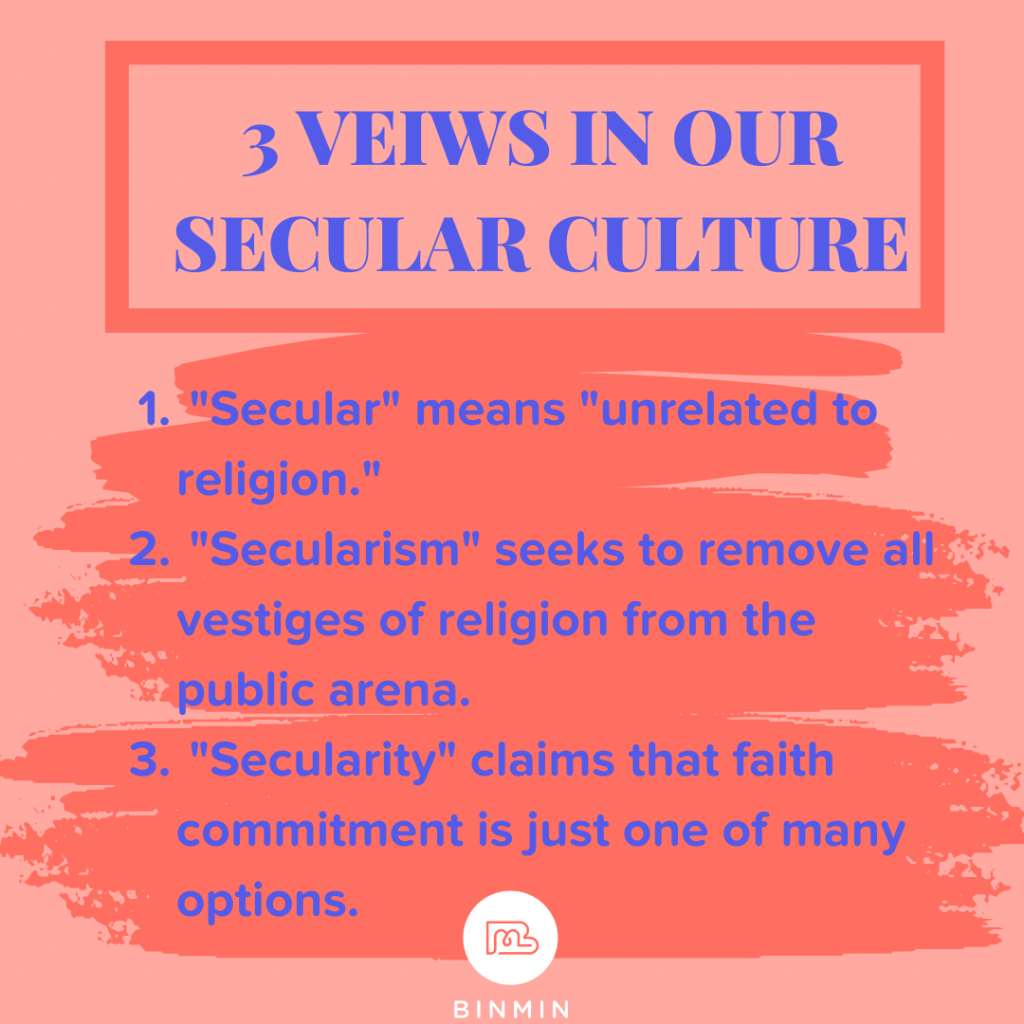 To begin with, “secular” means to be “unrelated to religion.”

In contrast, “secularism“ is the current atheistic faith commitment of American culture. It seeks to remove all vestiges of religion from the public arena.

By comparison, secular and secularism are not the same as a third view, “secularity.” In brief, this view claims that faith commitment is just one of many options. This is “pluralism,” a fundamentally flawed view of truth.

Avoid a common mistake. Secularists claim all views are equally welcome in the public arena (secularity). They are not.

The secularist’s promise and practice are at odds.

Practically, American culture embraces secularism. In other words, secularism is an atheistic faith commitment. And without justification, they push their religious agenda on everyone.

Emphatically, Christians should be actively engaging culture in the public arena. Otherwise, we are losing significant influence in the world around us.

Effects of Secularism on Culture

Most young adults grew up in public schools immersed in a secular environment. Through no fault of their own, they are like the frog in water heated slowly to boiling.

And the frogs don’t know they are boiling to death until it is too late. Similarly, secularism is slow death to the soul.

Humans immersed in secularism are like the sawdust-fed donkey. They overlook the dangers until they die from spiritual starvation.

1. You Can’t Avoid Being Culturally Engaged

The first reason Christians must be culturally engaged is that we cannot avoid it! Either we choose to affect the surrounding culture, or it will affect us.

The “world around us” is familiar. It includes everything we mentioned in our definition of culture above.

For example, these elements include family, church, job, community, politics, education, and entertainment.

In particular, God commands us to interact with others in these areas. Above all, we can’t ignore or avoid God’s command to be an influencer for his kingdom.

Furthermore, there is no reason not to appreciate God’s goodness, truth, and beauty in our world. However, when God’s kingdom and human culture conflict, we must respond.

In fact, being culturally engaged allows our Christian commitment to overcome secularism.

And be ready. Clashes between our faith and culture are unavoidable.

2. You’re on a Mission to Engage

Second, Christianity is a missionary faith.

Specifically, Christ commanded us to make disciples of all nations (Matt. 28:18-20). This “Great Commission” demands that we interact with outsiders.

For instance, as salt, we act as a preservative engaging culture to slow the spread of “decay” and evil in society. Just like salt-preserved meat in the first century.

But, if we fail to follow Christ’s command, we become like salt that has lost its flavor. We have lost our purpose in the wider world.

Comparatively, being “light” means being a positive witness to the world around us. That is to say; we are to act so that others “see our good deeds and give praise to our Father in heaven” (Matt. 5:16).

To sum up, being culturally engaged means reflecting God’s attributes. Including his love, justice, goodness, and truth into the created order.

Fourth, living in a secular society should never dim the reality that we are God’s image-bearers (Gen. 1:27).

As such, we have creative gifts and are to be vessels of beauty.

Not to mention we are to reflect God’s nature and character in our world (Gen. 1:1; John 1:1–3). That is our most basic identity.

5. You Have a Cultural Mandate

Specifically, God placed Adam and Eve to act as vice-regents (a king’s deputy on assignment). Consequently, they were to “populate the earth and subdue it.” Even after the Fall, God still expects us to be responsible stewards of the world around us.

God expects us to fulfill our potential so that His goodness, beauty, and truth will flourish. For instance, that includes science, medicine, agriculture, hospitals. It also includes universities, the fine arts, and more!

To summarize, it is our role to cultivate the world God has given us.

6. You Have a Family (Even If You’re Single)

Sixth is God’s cultural mandate for our families.

Unfortunately, secular influence has eroded that perception. Current culture views marriages as exercises of convenience and children as disposable.

For example, many men, women, and families bear the scars of divorce, abortion, and abuse.

But where there is familial brokenness, we can be agents of redemption.

And whether we are single or married, we can communicate God’s plan that restores families.

7. What You Will Face Critics

Unfortunately, we must deal with misinformation, misunderstandings, and lies directed at our faith.

That can make engaging in civil conversations about religion can be challenging. And over time, they take an emotional toll on us. Especially if we are prone to argue instead of acting civilly.

These conversations can also be difficult if you lack critical thinking skills. But do not despair. You can overcome this challenge by studying apologetics.

Because God commands us to:

These commands mean that training in apologetics is not optional. Ignoring training because of shyness or lack of a mentor does not give you an adequate excuse.

Even though God commands us to confront others, he supplies everything we need to do it. But we need to prepare.

Increasing our knowledge of Scripture provides a strong foundation.

Devotional Bible reading and prayer prepare us to remain humble and kind.

These exercises strengthen our spiritual muscles. And allow us to refute those who oppose our Christian belief. But a point often overlooked is remembering to be truthful (Col. 4:6) with gracious humility (1 Pet. 3:15).

Can I Successfully Engage Culture as a Christian?

Is it possible to live meaningful lives and enjoy the good, true, and beautiful? Especially when a corrupted society challenges our beliefs. Yes.

Why not begin right now working on these seven areas?

Each week work on understanding and applying the information in a particular area. Don’t worry if you struggle at first. It’s important to realize that it will be challenging.

However, after several months you will be both fruitful and more reliant on God.

PrevPrevious6 Facts About Christian Apologetics (Pre-Evangelism) You Must Know!
NextWhat Does It Mean to Be a Christian Disciple?Next