What's My Next Step?

Interpreting Scripture By Investigating with the C.I.A. Method

Interpreting Scripture is critical for every Christian.

To begin with, the academic name for accurately interpreting Scripture is “exegesis.”

For the purpose of making exegesis understandable, we present the “C.I.A. method.”

As a result of following these three steps, we will do two things. First, we will accurately interpret Scripture. And second, correctly apply the Bible to our lives.

But before we begin, let’s look at a common mistake in interpreting Scripture.

The Wrong Question for Interpreting Scripture 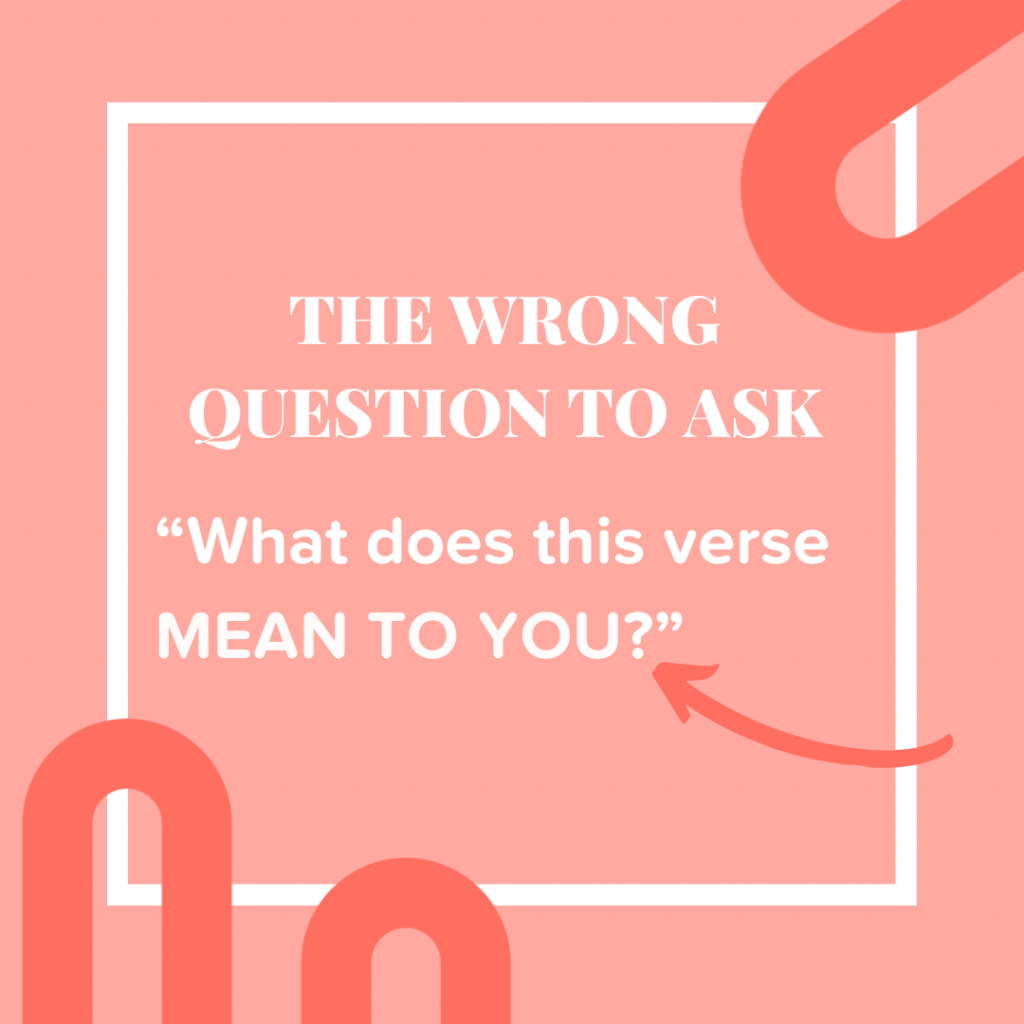 A point often overlooked in interpreting Scripture is asking the right questions. Often in a small group or Bible study, the leader may ask, “What does this verse mean to you?”

Unfortunately, leading with this question causes a problem. In general, it short-circuits understanding the real meaning of those verses!

To put it differently, it puts the horse before the cart.

In contrast to the C.I.A. method, applying the verse to our lives is the last step in proper Biblical interpretation.

For this reason, follow the three-step method for investigating the meaning of any Bible passage: C.I.A.

But First: A Super Creepy Example

To demonstrate why we don’t begin with, “What does this verse mean to you?”

Consider the following nursery rhyme “Ring Around the Rosie”. It is an example of not leading with the application.

It illustrates why interpreting Scripture with the correct methods is critical.

Take the case of someone asking you, “What does that children’s nursery rhyme mean to you?”

However, when understood in its historical and literary context, it is not innocent.

The poem arose in 1665 in London during the plague known as the Black Death that killed many children.

Each verse details a feature of the disease. For example:

In this instance, once we know the literary and historical contexts, the poem’s meaning is clear.

The poem is a tragic account of children’s death.

In the same way, it is possible to misinterpret Scripture without a proper method.

Interpreting Scripture: What Do We Call This?

There are several ways to study the Bible.

As has been noted, interpreting Scripture has academic names. One is hermeneutics, and the other is exegesis.

Similarly, exegesis is the practice of bringing out the real meaning of the text. It seeks to answer, “What did the author intend to communicate to his original audience?”

Consider biblical interpretation as a bridge.

In the first place, one side represents the past. Specifically, it seeks to find out the author’s original meaning to his audience.

After that, cross the bridge to the present-day. Accordingly, we bring sense, meaning, or intention into our contemporary context.

Explicitly, it seeks to understand the fundamental meaning of the words and terms.

After that, we then expand our investigation.

To illustrate, in 1 John 4:7, John writes, “everyone who loves has been born of God and knows God.”

It is possible to misinterpret this verse. For example, a wrong interpretation of this passage is:

Why is this a wrong interpretation?

Because having a saving relationship with God requires more than love alone!

In this case, we must interpret the verse in light of the entire book.

And when we do, we find our relationship with Jesus rests on two additional passages.

Another aspect of literary context is knowing the genre of the writing.

In brief, genre refers to literary style, form, or content.

And the same is true of the Bible.

There are many different genres in both the Old Testament and in the New Testament, including:

For instance, the books of Daniel and Revelation are apocalyptic. But without understanding the features of apocalyptic writings would be confusing.

Equally important in interpreting Scripture is the next step of historical context.

Also, the apostle John wrote the Book of Revelation in the latter part of the first century. He wrote under the persecution of Roman Emperor Domitian (in A.D. 51–96).

For one thing, Revelation comforted persecuted believers. In the hope that Christ’s return to establish his reign on earth and destroy his enemies would come quickly.

In short, context is crucial to getting Scriptural interpretation right.

Occasionally context can be challenging for some passages. But don’t despair. In those circumstances, consider consulting a study Bible or commentary.

The next step in interpreting Scripture is the “I” in C.I.A. This initial stands for “interpretation.” Or “What does the passage mean?”

Hence, when interpreting Scripture, there is only one meaning of the text.

And obviously, that is the author’s intended meaning to his original audience.

This definition often surprises people. But correctly interpreting Scripture is easy. Simply assume the plain, simplest, and most straightforward meaning of the text.

Most of the time, you don’t have to make this more challenging than it has to be. To demonstrate, consider “The Golden Rule” in Matthew 7:12. It states, “So whatever you wish that others would do to you, do also to them.”

Jesus’s command is in plain language. On the one hand, his meaning is as clear today as it was to his original audience.

To that end, there is no need to interpret it in any other way than in the text’s straightforward literal meaning. 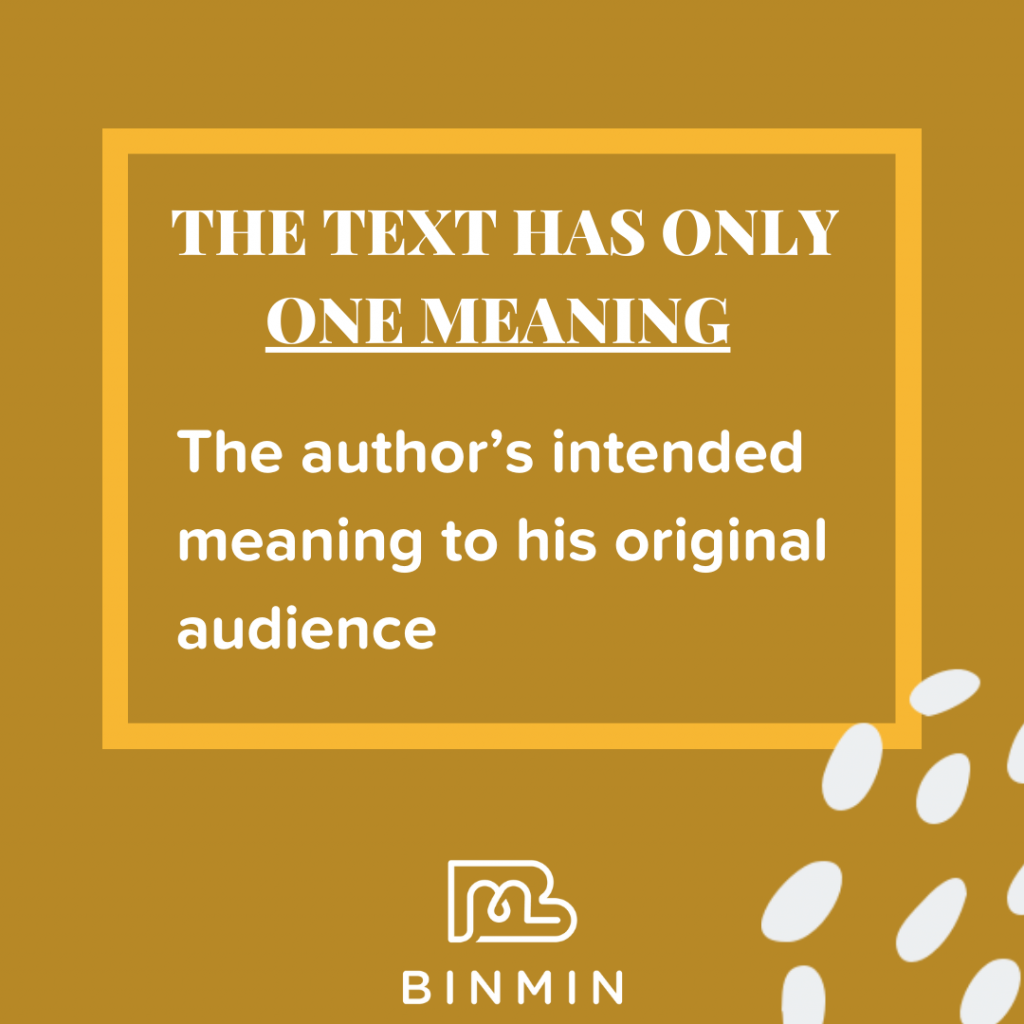 As has been noted, a given passage has only one interpretation. In essence, that is the author’s intended meaning to his original audience.

Even so, there is often some universal truth or “eternal” principle behind it. Once that is discovered, we can apply that principle to our contemporary world today.

In effect, the universal command is not to desire another person’s spouse or property. That principle is as understandable and applicable today as three thousand years ago.

Notwithstanding that, few of us have neighbors with oxen and donkeys in their yard. And even if they do, we are probably not covetous towards them.

Nonetheless, oxen and donkeys are not the points. To interpret this commandment, we need to discover the universal principle.

That is to say, do not be jealousy  of other people’s possessions, like their new truck, phone, or house addition.

Now it’s your turn to start interpreting Scripture. You can start where you are in your Bible reading. Remember the sequence:

Correctly interpreting Scripture draws us into a deeper relationship with God.

As a result, we will love him more as his Word saturates our lives.

PrevPreviousA Survey of the Bible: 9 Essential Facts You Must Know!
Next6 Facts About Christian Apologetics (Pre-Evangelism) You Must Know!Next