8 Questions That Change How Christians Culturally Engage a Secular World

As a Christian, you want to culturally engage non-Christians.

Some people may have pushed back. They may have told you that Christianity has no place in public arenas. For example, in education, workplaces, politics, art, and entertainment. Instead, you’ve been asked to practice your faith privately or in church.

What should you do? Thankfully, eight questions will change how you culturally engage in a secular world. 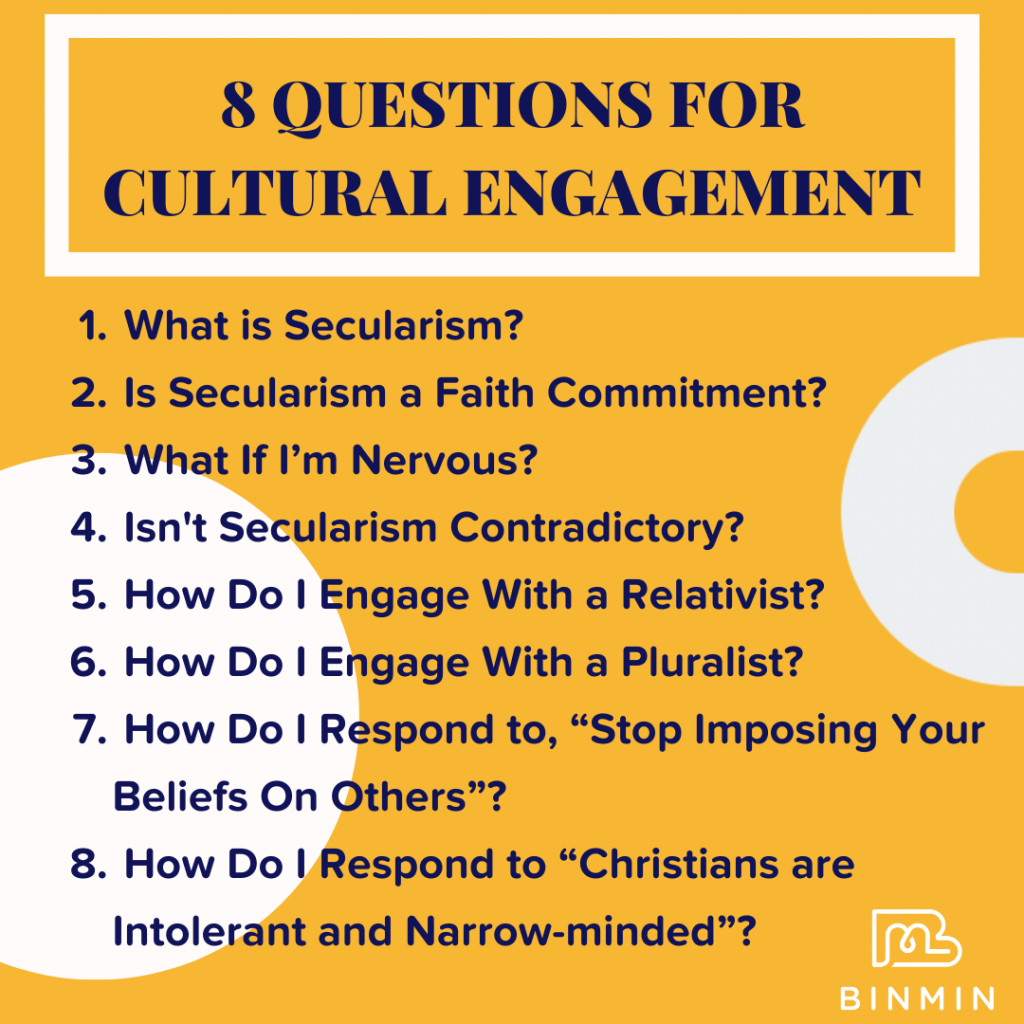 First, to culturally engage others in the public arena, we must understand “secularism.”

Secularism differs from “secular”. Secular means “worldly” things. Things that are not associated with religion, things that aren’t spiritual or sacred.

But secularism is a worldview that holds several beliefs:

2. Is Secularism a Faith Commitment?

Secularism is actually a faith commitment. Followers believe and make claims about what they think is absolutely true.

A faith commitment is a worldview claiming to “know” the truth.

In summary, a faith commitment is:

For example, Christianity is a worldview that claims:

Maybe you want to culturally engage a secularist but are nervous or worried.

You don’t need to feel intimidated. But by the same token, there are three pieces of helpful advice: 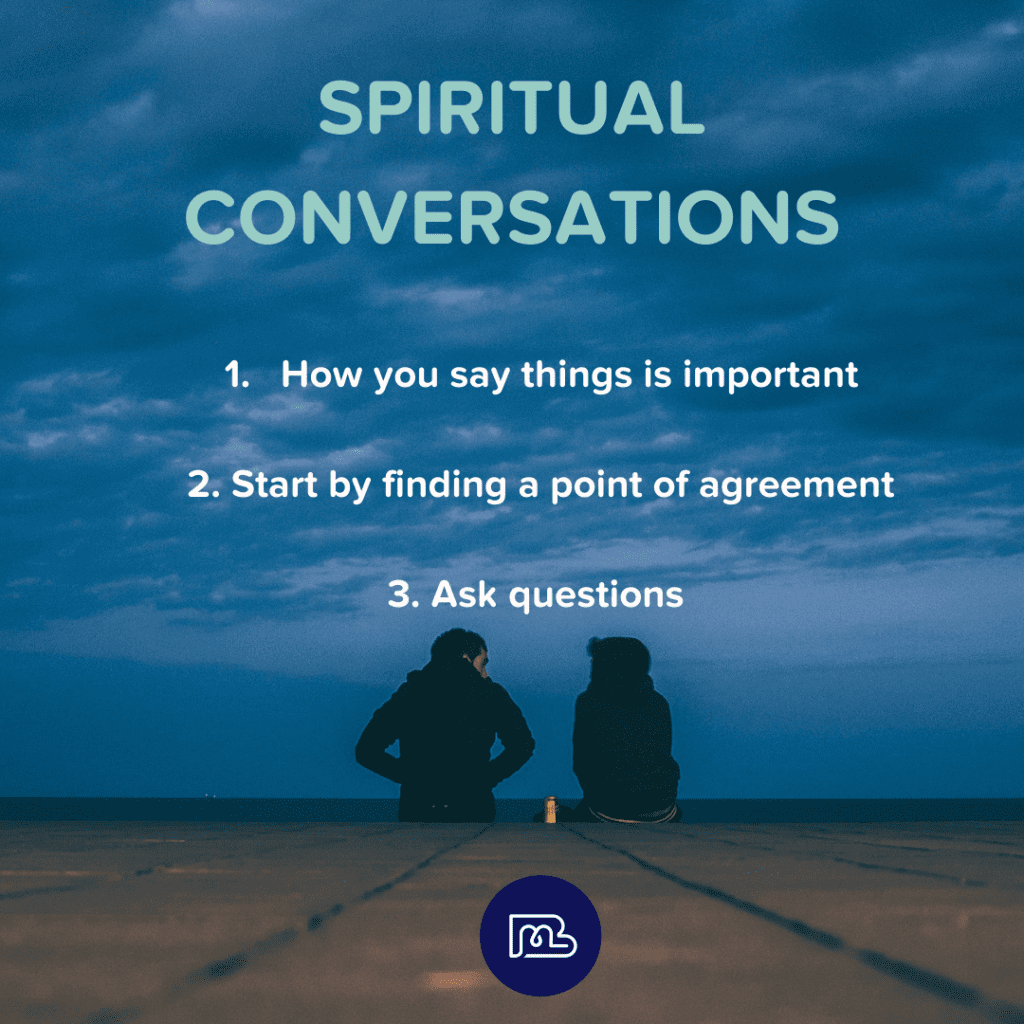 Secularists are wrong about their view of truth (pluralism and relativism). They also make self-contradictory demands on Christians.

5. How Do I Culturally Engage Secularists Who Believe in Relativism?

Secularism believes in relativism. That means that there is no absolute truth. Instead, truth is determined by some person, culture, or situation.

But relativists make a fundamental mistake. They believe relativism should apply universally to everyone everywhere. But that is the definition of “absolute” truth!

To help them see their mistake, ask them, “Do you believe secularism only applies to you or everyone?

If they say everyone, they believe secularism is an absolute truth. Therefore secularism’s belief in relativism is wrong.

6. How Do I Culturally Engage Secularists Who Believe in Pluralism?

Secularism believes that all worldviews are equally valid. This belief is wrong.

Essentially you use the LON anytime you say something is true or false.

To show the mistake in secularism, ask, “Is secularism true and Christianity false?”

When they say “yes.” They have contradicted their belief. Thus pluralism is wrong.

7. How Do I Culturally Engage Secularists Who Demand, “Stop Imposing Your Beliefs On Others”?

A common secularist complaint is that we stop imposing our views on others.

In response, we ask, “Aren’t you doing the same thing by imposing secularism on us?”

If they don’t immediately see their faulty logic, you can ask:

8. How Do I Culturally Engage Critics Who Claim “Christians are Intolerant and Narrow-minded”?

Two other secular complaints are intolerance and narrow-mindedness. These charges are because Christianity claims to be the only valid worldview.

Two questions sort out the problem:

But as shown above, the secularist also believes their view is the only correct belief system. So they exclude other worldviews. And by their own definition are narrow-minded and intolerant!

The Biblical case for cultural engagement means that you are a change agent in culture.

It can be challenging to understand and then refute secularist’s arguments. But you are now better prepared than before to culturally engage others.

This week why not spend some time preparing to talk about your faith with a non-Christian, particularly if they believe in secularism. Remember to pray and stay in God’s Word.

As you interact, thoughtfully ask questions. And avoid being argumentative or judgmental.

Even if we don’t sway our secularist friend or coworker, you never know who else may be listening. You may be planting a seed that will reap a spiritual harvest someday.

What is Cultural Engagement? by Dr. Bob Martin III

Binmin Podcast Ep. 7a: “What is Cultural Engagement?” Part 1 of 2

Binmin Podcast Ep. 7b: “What is Cultural Engagement?” Part 2 of 2