What Happens to a Christian After Death?

Is there life after death? Have you ever wondered, “What happens after we physically die?”

Why do I ask? Because every human dies, including you!

Maybe you have never wondered what will happen after death, but I have. And the older I get, the more often I wonder about it.

The good news is Christians don’t need to fear death.

But it would be nice to know what to expect after death.

For example, do you believe that after you die you:

As surprising as it might be for many Christians, none of these options are correct.

What Happens After Death? 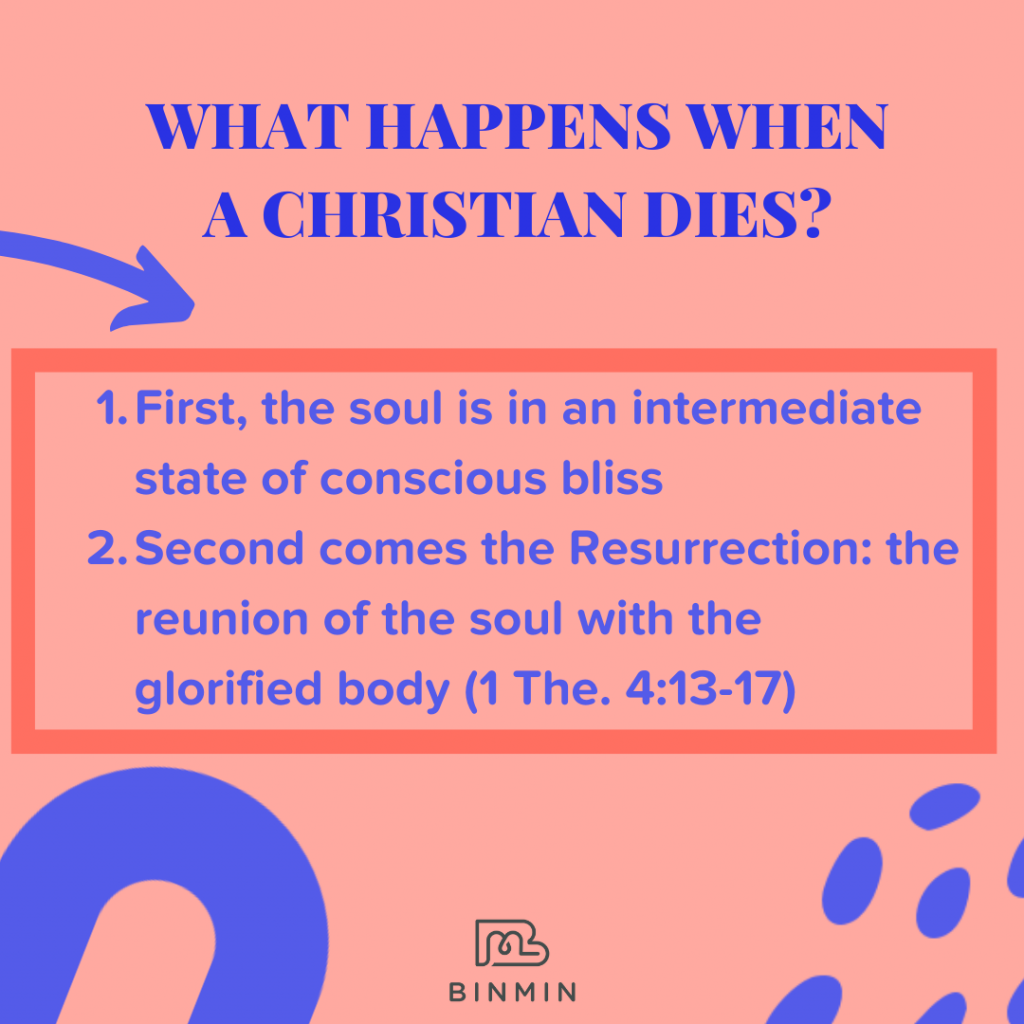 On the other hand, the souls of non-Christians are separated from their bodies.

The Soul and Body Distinction

To fully understand these two events, you need to know that humans are a unity of soul and body (hylomorphism). 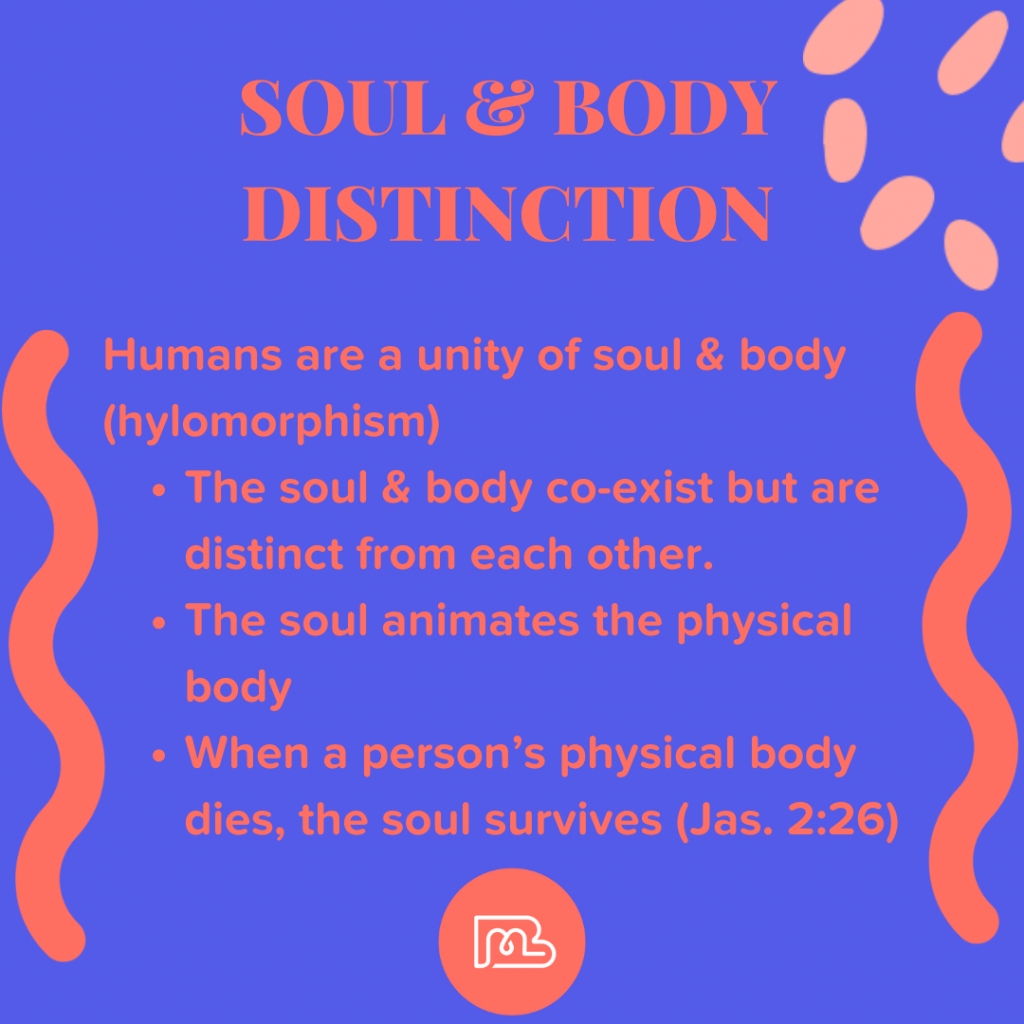 If that distinction seems confusing, let me give you an analogy that might help. Consider a person who writes down their thoughts on a piece of paper. In this analogy:

Intermediate State: The Human Soul Survives After Death Without a Body

At this point, you may be asking, “Can a soul survive without a body?”

The answer is yes.

Souls can exist without bodies. For example:

After death, the souls of both Christians (Heb. 12:13) and Old Testament saints (Eccl. 12:7) are in an intermediate state (heaven) in the presence of the Lord. We are here temporarily waiting to be resurrected with our glorified bodies (1 Thess. 4:13–17). 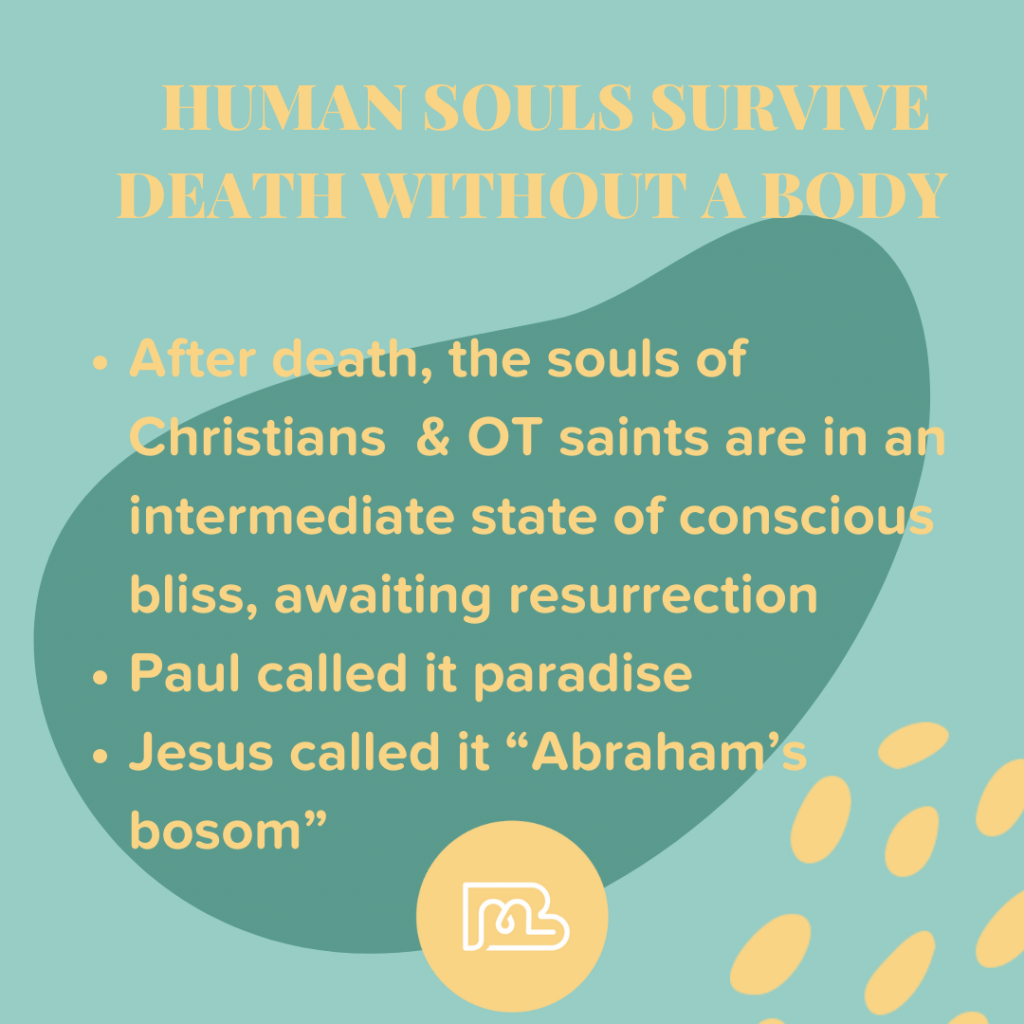 While we are in this intermediate state, our souls are conscious:

Three Reasons Why Christian Souls Survive in an Intermediate State 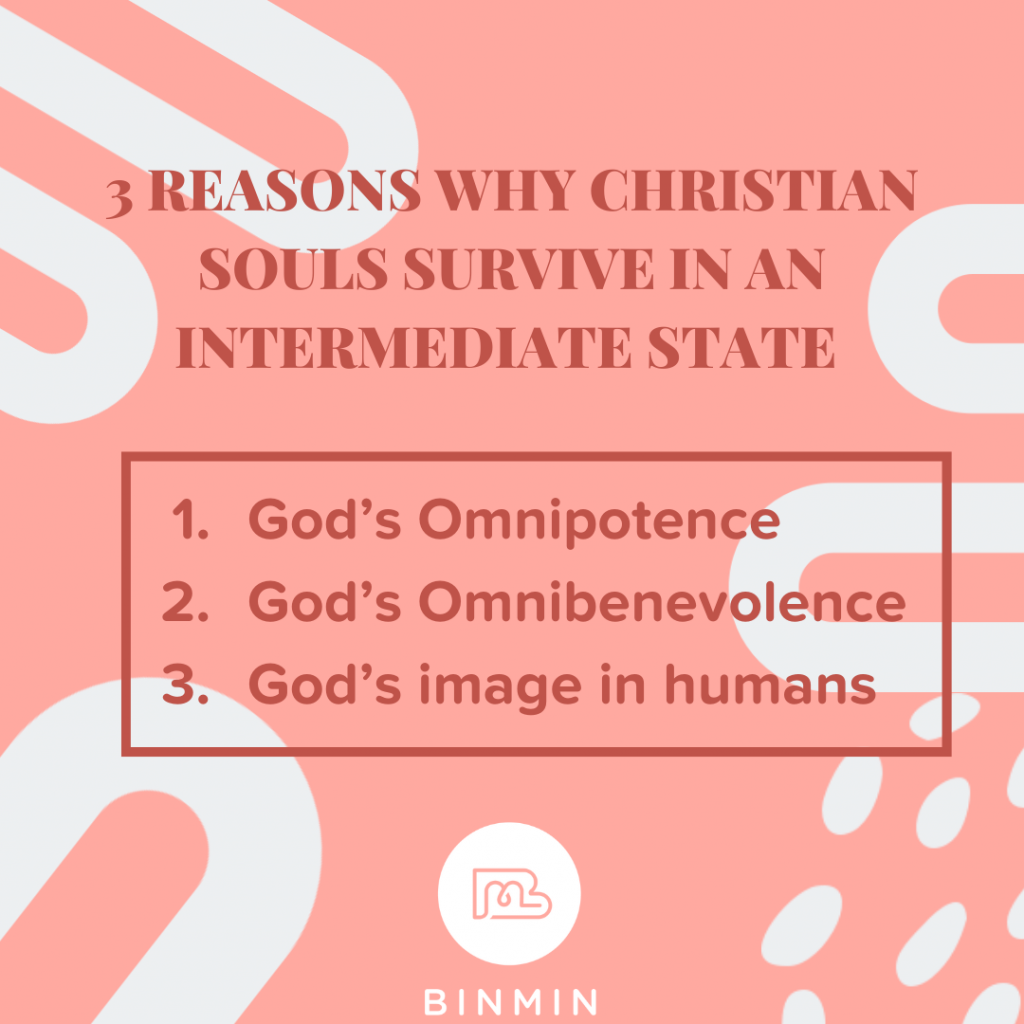 There are three reasons the souls of Christians consciously exist after death. These include:

a.    Soul Survival Is Rooted in God’s Omnipotence

Being all-powerful, God is Creator and Sustainer of all things, including our souls (Col. 1:16-17). So, it makes sense that if he can create our souls, he can also sustain them after death.

b.    Soul Survival Is Rooted in God’s Omnibenevolence

But just because God can sustain our souls beyond death, is there any reason why he would do it?

And the reason is based on his infinite goodness (omnibenevolence) (Lam. 3:22). God keeps our souls alive after death so that we can gather around his throne to sing and worship him (Rev. 4:11).

In short, God wants to sustain our souls after death because of his infinite goodness. And he has the infinite power to sustain them. God’s omnipotence and omnibenevolence guarantee conscious survival of the soul after death.

c.    Soul Survival Is Rooted in God’s Image in Humans

Another reason our souls survive death is that God created humans in his image (Gen. 1:27). Our souls are part of God’s image.

And God would never annihilate his image. Why?

The Resurrection of the Human Body

Now that we know our souls survive after death, what happens next?

The next event is our resurrection. The resurrection involves the reunion of our soul with our immortal body (2 Cor. 5:1–4).

The Time of Believer’s Resurrection

You might wonder, “When is the resurrection going to happen?”

The short answer is we don’t know. Why?

There are Two Resurrections

We may not know when believers will be resurrected, but we know a few things. 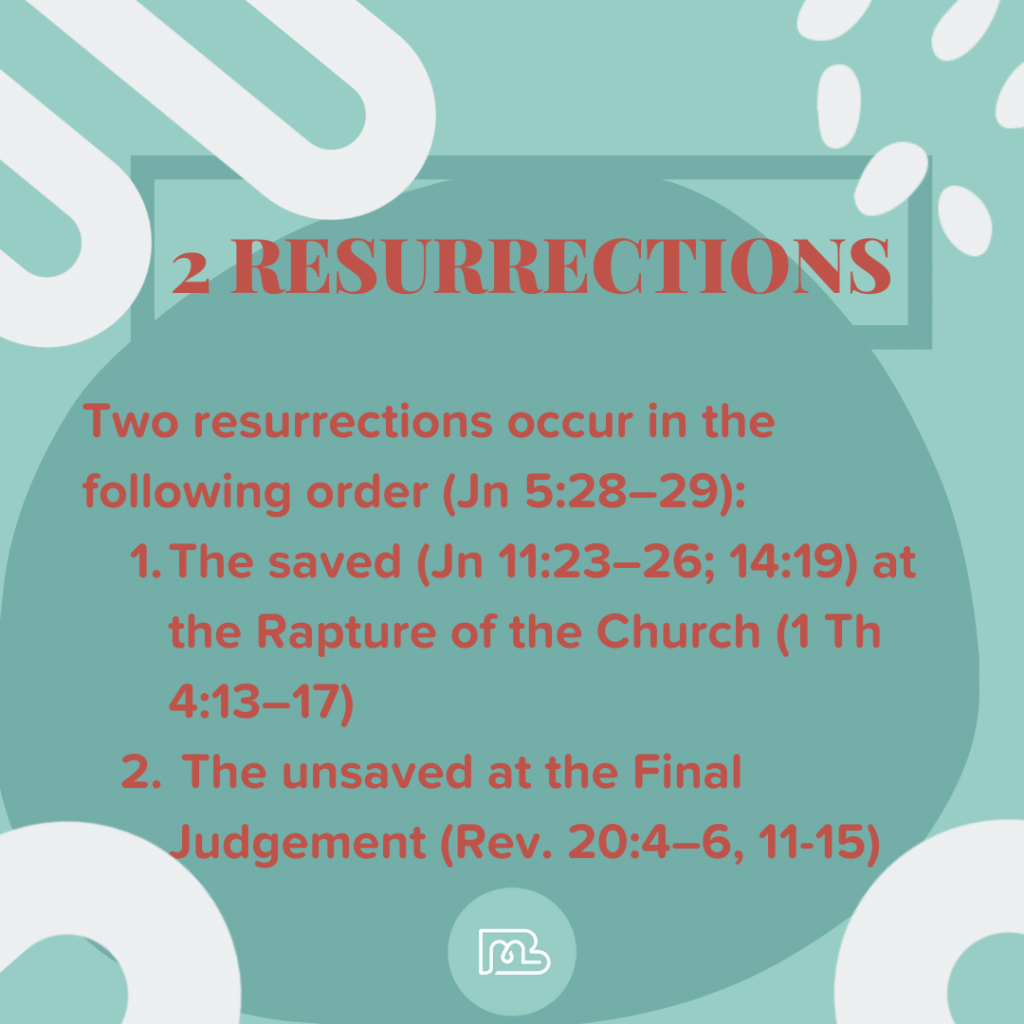 The first resurrection occurs at the Rapture of the Church (1 Thess. 4:13–17)

This second resurrection occurs at the Final Judgment. This judgment is called the Great White Throne Judgment. It comes at the end of time following the millennial reign of Jesus (Rev. 20:4–6, 11-15)

The Nature of the Believer’s Resurrection Body After Death 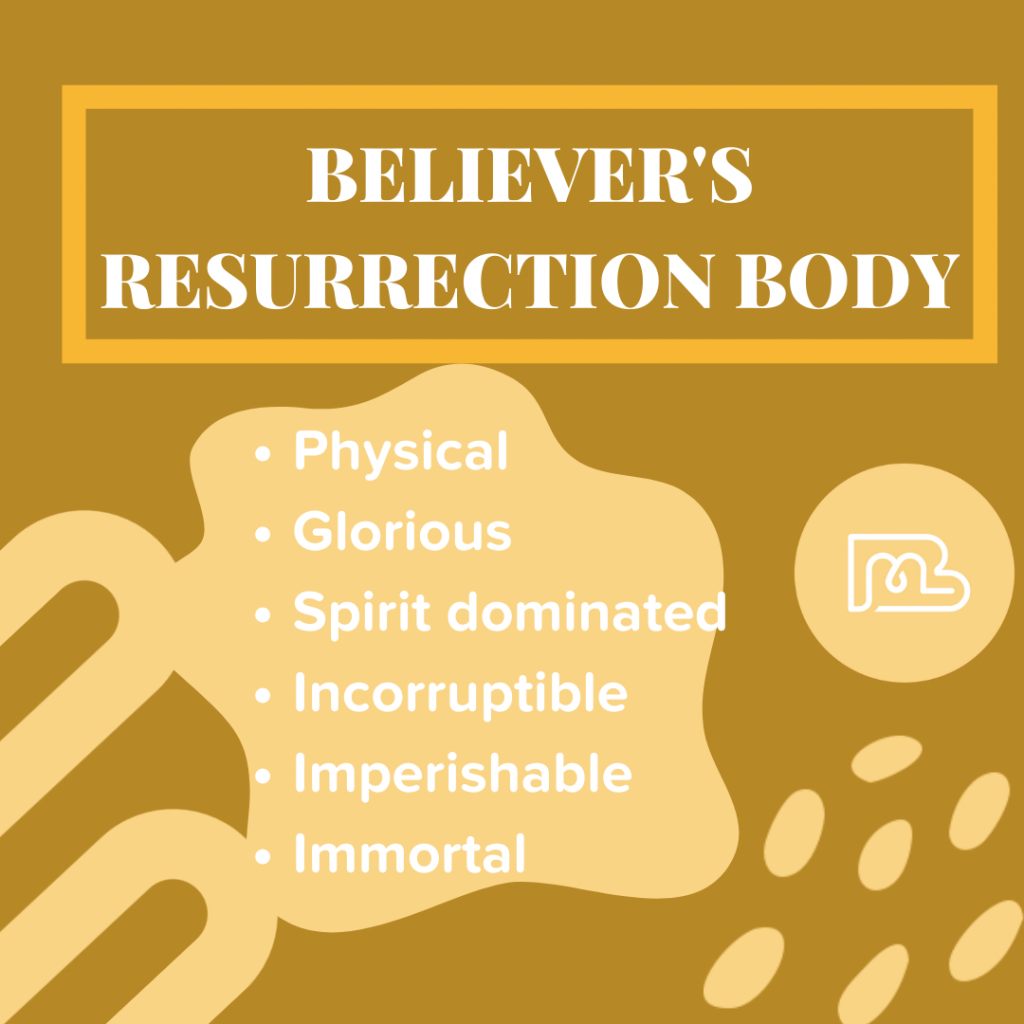 Our resurrection bodies will also be supernaturally powered (1 Cor. 15:44):

Our Resurrection is Based on Several of God’s Attributes 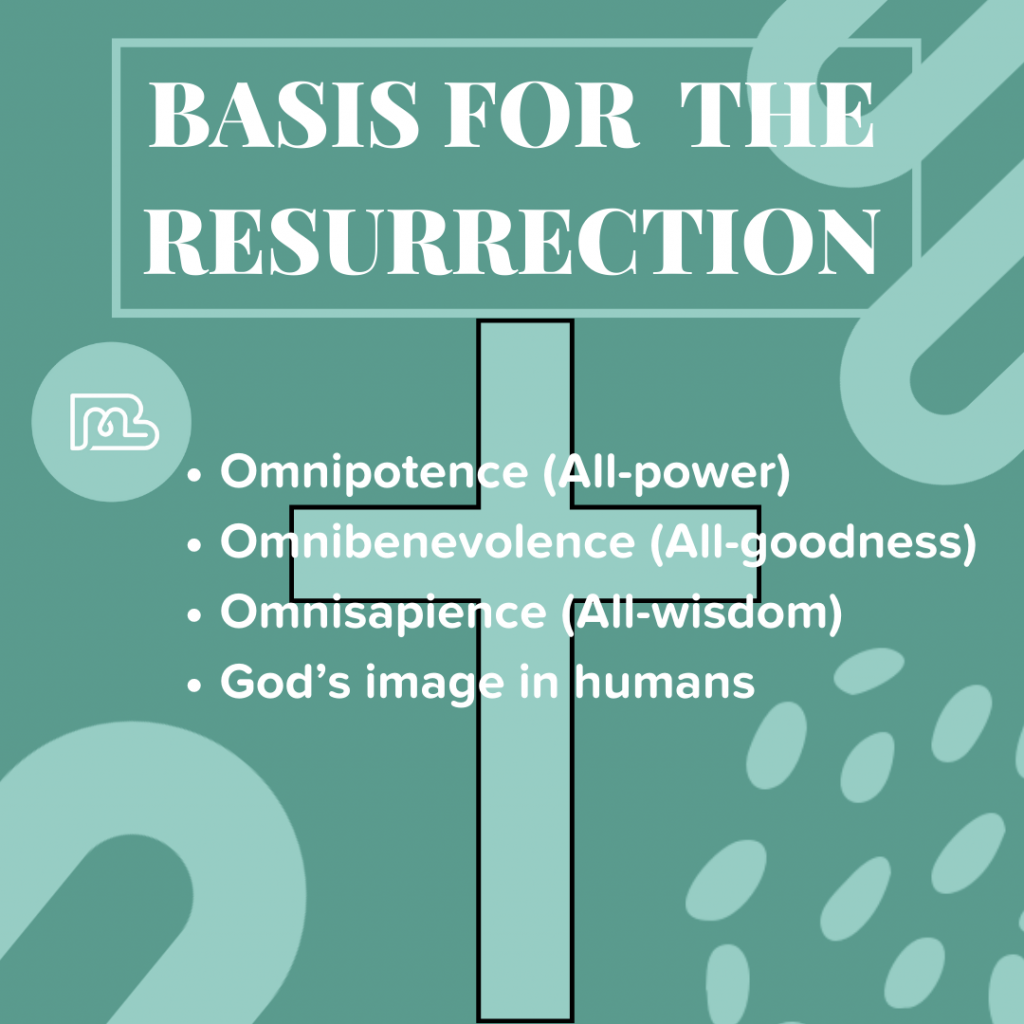 Our resurrection is rooted in several of God’s attributes. For instance:

Resurrection is rooted in God’s power.

But even though God’s omnipotence can resurrect the dead, why would he do it?

d.    Being Created in God’s Image Assures the Bodily Resurrection

God created humans in his image. And that image includes the physical body. Therefore, God’s image in humans is not fully restored unless there is a resurrection body.

The New Heaven and New Earth

Call to Action: What’s Your Next Step

Following death, our souls will be in paradise. We await our resurrection at the Rapture of the Church (or the Final Judgment).

Please don’t wait until death comes knocking at your door. Instead, place your faith in Jesus Christ as your Savior and know that you will be with Him eternally when you die.

Binmin Podcast Ep 11: End | What Questions Should I Ask About My Faith?