The Christmas story is one of the most phenomenal stories in history! And there is good news. The visits from angels, a guiding star, and the virgin conception are all true!

Commonly referred to as the “virgin birth,” the story of Jesus coming to earth is perhaps more accurately termed the “virgin conception.” And it is the basis of the Christmas story.

Today, we can trust that all the miracles leading to the birth of Jesus are true. And that belief doesn’t mean abandoning our intelligence.

The Christmas Story According to the Bible

Matthew (Matthew 1:18–25) and Luke (Luke 1:26–38) are two essential books of the Bible that tell how Jesus’ mother, Mary, conceived and gave birth to a child (Jesus) by the power of the Holy Spirit.

Mary was a young virgin (parthenos; Luke 1:34) engaged to Joseph (Luke 1:27). So when an angel named Gabriel visited her and explained that she would become pregnant (Luke 1:26-31), it must have seemed impossible.

But through a miracle of God, she conceived Jesus (Matt 1:18) and remained a virgin until she gave birth to Jesus (Matt. 1:25).

In addition to the scorn and skepticism of others, Mary’s pregnancy had additional challenges. Because of a Roman census (Luke 2:1–4), Mary and Joseph traveled from Nazareth (Luke 1:26) to Bethlehem (Luke 2:1-7). Once there, Mary gave birth to her son, Jesus, in a stable. She wrapped him up and laid him in a feeding trough for animals (i.e., manger; Luke 2:4-7).

Simultaneously, angels announced Jesus’ birth to shepherds. We also read about a multitude of heavenly hosts that praised God, saying, “Glory to God in the highest, and on earth peace among those with whom he is pleased!” (Luke 2:8-20)

The Miracles of the Christmas Story

This miracle is called the Incarnation–a theological term that means “God in bodily form.”

But why do we refer to the miracle as the “virgin conception” rather than virgin birth? Because the “conception” is the miracle, not the (natural) birth.

The truthfulness of the virgin conception is under constant attack. 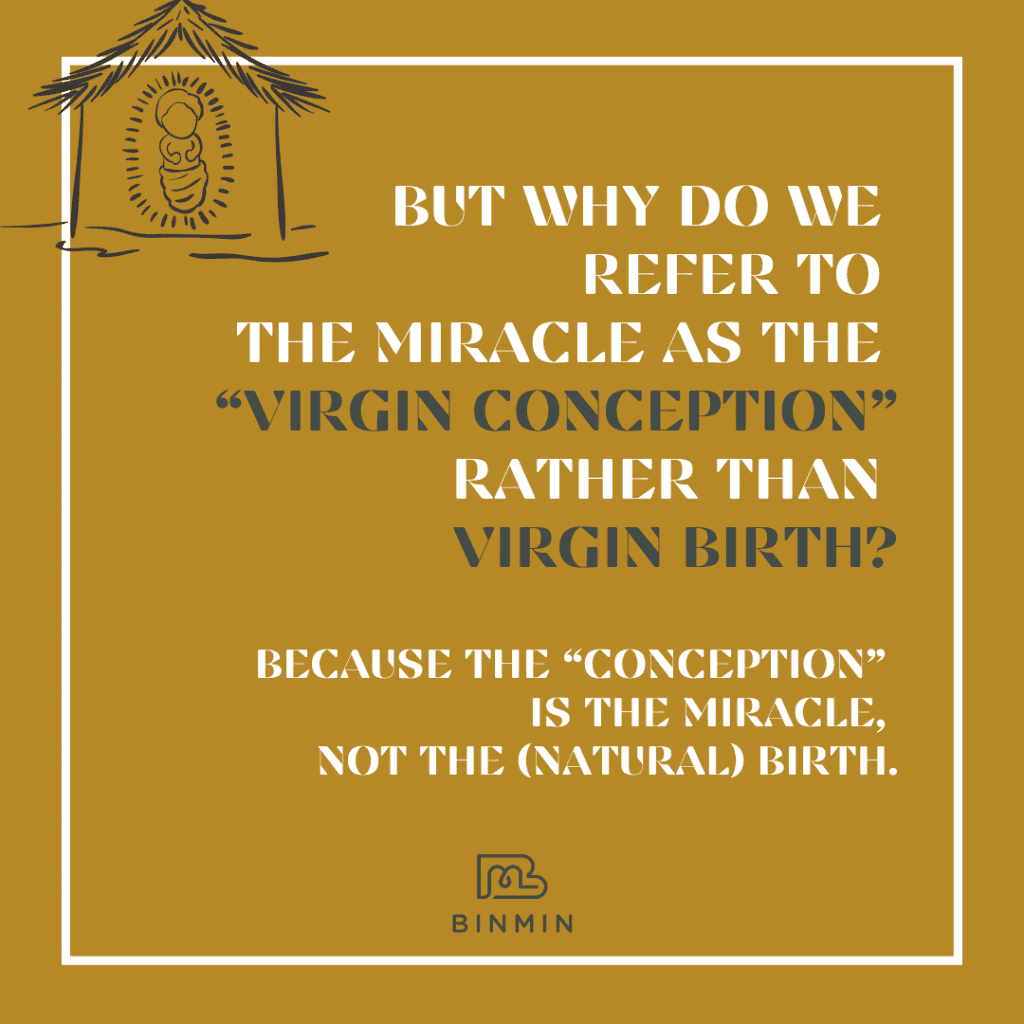 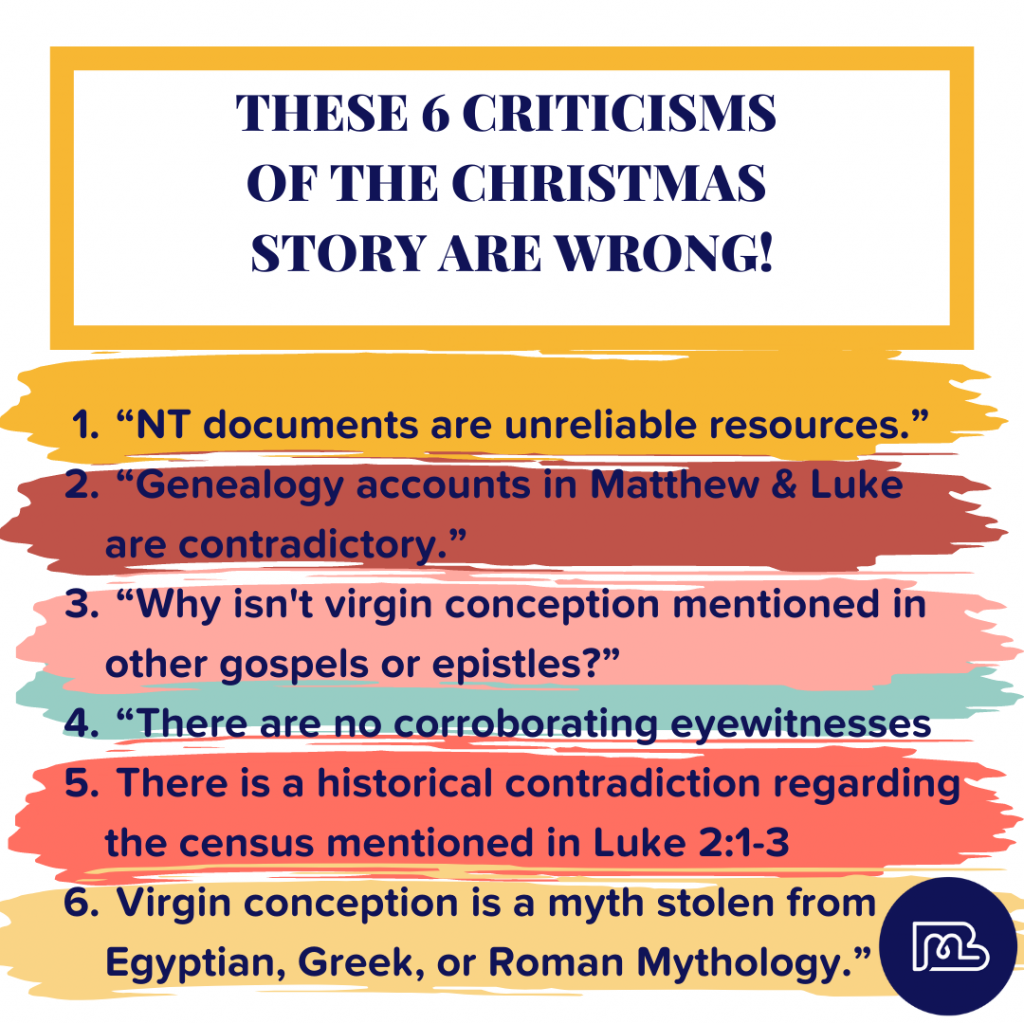 Response: In response to this criticism, we can point to two key things that confirm the truthfulness of the virgin conception. Firstly, the reliability of the New Testament documents. And secondly on the New Testament witnesses.

The New Testament documents are more authentic than any other book from antiquity. And they have been corroborated by external evidence.

Additionally, the New Testament authors accurately recorded the events they witnessed. The disciples were men of outstanding moral character. And all except John willingly died for what they believed (the resurrection).

Response: These lists are not contradictory but complementary. Two genealogies make sense because Jesus had two lines of ancestors.

So, while both lines trace Christ to King David, each is through a different son of David.

On the other hand, Luke lists Christ’s actual (biological) lineage through Mary.

3. “If the virgin conception/ incarnation is so important, why isn’t it mentioned in the other gospels or epistles?”

Response: To this criticism, I would respond: “absence of evidence is not evidence of absence.”

Each gospel and epistle had a specific purpose and audience. The absence of the birth narrative in Mark and John does not mean it didn’t happen or the writer was unaware of it. In fact, Mark, John, and Paul all knew about the virgin conception and referred to it.

Mark (whose book was superintended by Peter) was the first gospel written. His book begins with Jesus’ public ministry and is brief with a sense of urgency.

But clearly, Mark knew Jesus’ birth narrative. He calls Jesus the “son of Mary” (Mark 6:3) rather than the “son of Joseph.”

Tracing lineage through the mother was very uncommon in a male-dominated culture. So, why did Mark use this unusual term? He did it to affirm that Jesus was indeed fully human.

John, too, was aware of Jesus’ miraculous conception. In John 8:41, Jesus’ enemies said, “We were not born of sexual immorality.” (John 8:41). They were implying Joseph was not Christ’s father. And that Jesus was illegitimate. Jesus responds with, “Can any of you prove me guilty of sin?” (8:46).

“Born of a woman” refers to Jesus’ virgin conception; to be begotten of a woman is significant in the Jewish patriarchal culture.

4. “There are no corroborating witnesses, that is, no eyewitnesses who saw the event”

Response: Matthew and Luke had access to two incredibly-credible witnesses!

5. Skeptics believe they have uncovered a historical contradiction regarding the census mentioned in Luke 2:1-3

“In those days a decree went out from Caesar Augustus that all the world should be registered. This was the first registration when Quirinius was governor of Syria. And all went to be registered, each to his own town” (Luke 2:1–3, emphasis added).

Let’s dive into the history to understand this objection more fully.

History records that King Herod died in 4 BC.

Based on this chronology, critics claim Jesus could not have been born during the census of AD 6-7. Therefore, Luke is in error.

Response to the claim of historical contradiction:

Luke would have known the dates of Jesus’ birth. He also knew the date of the 6-7 AD census because he referenced it in Acts 5:37! So, it is unlikely that such a meticulous historian would confuse these dates.

There are several ways to resolve the confusion.

Firstly, there is an alternative translation of Luke 2:2.

Secondly, this “first” registration (enrollment list) probably refers to the first of three Roman censuses Augustus took during his 44-year reign (Augustus, Deeds) that occurred in 8-7 BC.

Since a Roman census was a massive project, it likely took several years to complete. Meaning it probably continued through Christ’s birth in 6-4 BC.

Thirdly, Quirinius possibly served as governor (also called a “legate”) of Syria on two occasions. He was elected to counsel in 12 BC and probably served with Varus as governor of Syria from 6- 2 BC. His second reign began about 6 AD. As such, he would have been governor during both censuses.

6. “The virgin conception is a myth stolen from Egyptian, Greek, or Roman Mythology.”

This theory argues that the early church used Egyptian (Horus), Persian (Mithras), or Hellenistic myths. They used them to propound that Jesus was the “Son of God.”

There are many reasons to reject this hypothesis. For instance:

There is unmistakable evidence for the truthfulness of the virgin conception. It is Joseph’s reaction. Mary was “pledged to be married” (Matt. 1:18), meaning she had not had sexual intercourse with Joseph.

But Mary conceived “before they came together.” Thus, it was not a natural conception.

Joseph’s initial reaction clearly shows that he had not had sexual intercourse with Mary. Clearly, he suspected infidelity. And he had decided to divorce her quietly not to embarrass her publicly (1:19).

In fact, an angel needed to appear to Joseph to reassure him of Mary’s miraculous conception (1:20).

Firstly, Matthew 1:22-23 directly references Isaiah 7:14. This Isaiah quote is a prophecy about the virgin conception. He writes, “All this took place to fulfill what the Lord had spoken by the prophet: “Behold, the virgin shall conceive and bear a son, and they shall call his name Immanuel” (which means, God with us)” (cf. Is 9:6, 7; 11:1–5, emphasis added).

Secondly, Genesis 3:15 is the earliest Messianic prediction of a virgin conception. The reference “her offspring” implies the Messiah would come by a woman, not a natural father. This matriarchal reference is noteworthy in a patriarchal culture. Descendants were traced through their father (cf. Gen. 5; 11).

3. Finally, Christians should ask the critics, “Why would Matthew and Luke make the Christmas story up?”

Whether you face critics of the virgin conception or have some doubts yourself, it’s helpful to doubt those doubts!

By that, I mean that if a critic doesn’t believe the Christmas story, okay.

But how then do they explain the reason for the virgin conception accounts in the gospels?

We ask the critic three questions. For instance:

Firstly, the idea of God conceiving a child! “Why would devout Jews (Matthew and Paul–Luke’s primary resource) make up such a blasphemous story?

Secondly, “What is the plausible motivation for inventing and recording this fable?”

Thirdly, “Where would such a story come from?”

In short, there is no intelligent reason for inventing the virgin conception.

Therefore, the only reason for recording the Christmas story is because it is TRUE!

Christmas celebrates the virgin conception and birth of Jesus, the redeemer of humankind.

What does redeemer mean?

The word redeemed–and all that it signifies–demonstrates God himself (Jesus) took on human nature at the Incarnation. Jesus lived a sinless life.

In doing so, he willingly sacrificed himself for us. While on the cross, he took the punishment for our sins.

As a result, if we trust him as our Lord and Savior, we can spend eternity in heaven!

Now that is something worth celebrating.

Hemer, Colin J., The Book of Acts in the Setting of Hellenistic History. Eisenbrauns, 1990.