Why Christianity? Because Jesus is Superior to Other Religious Leaders

Do you believe that Jesus is superior to every other leader of a world religion?

Understand me. In general, the founders of other religions made noteworthy contributions to humanity’s knowledge.

Dr. Norman Geisler explicitly explains why Jesus is unique among the founders of other world religions.

If, in fact, Jesus not only claimed but proved to be God.

That makes Jesus the most important figure who ever lived.

It also means we must make the life-altering decision to either place our faith in him or reject him as God.

So why should you choose Jesus? Firstly, a comparison to other religious leaders should convince you that he is superior.

And secondly, if you agree, your next step should be to make him your Lord and Savior.

Why Are the Leaders of Various Worldviews Important?

Specifically, a worldview is determined by:

It must be remembered; there are only seven worldview choices. But the critical question is, “Which religion is the correct one.”

Therefore, a reasonable starting point is to compare each religion’s founder. And when you compare them, there is only one answer. Jesus is superior.

Jesus Is Superior to All Other Religious Leaders

Christ is unique among all who ever lived.

Jesus proved to be God in the flesh.

There are six primary founders of major world religions:

And Jesus is superior to each. 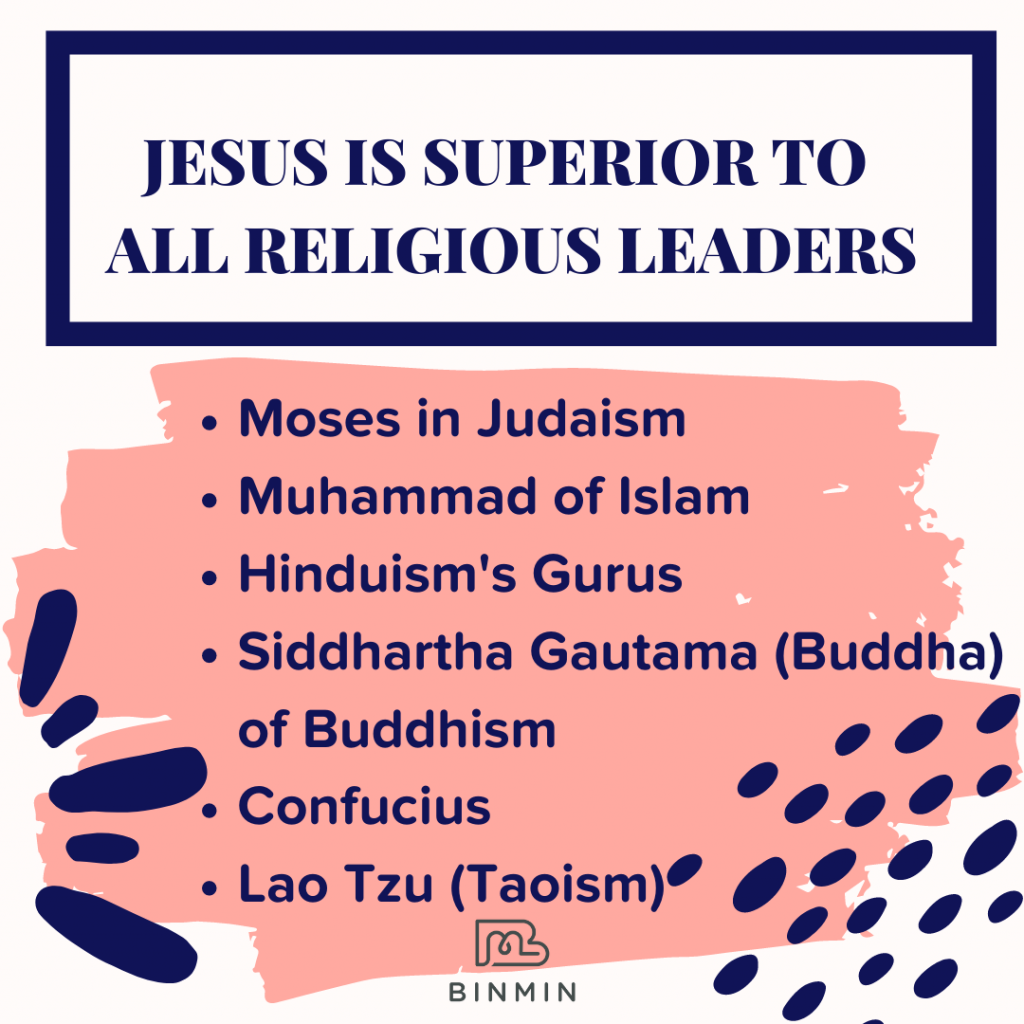 1. Jesus is Superior to Moses of Judaism

Judaism is the world’s oldest monotheistic religion. And Moses is the greatest Old Testament prophet. But Jesus claimed and proved to be the Son of God (Heb. 3:5–6), who fulfilled Moses’ Law (Matt. 5:17).

Undoubtedly, Moses performed miracles (Exod. 4:1-7). But Christ’s signs and wonders were more extensive and extraordinary in degree. As a result, the New Testament is clear that Jesus is superior to Moses (Matt. 5:17; Heb. 3:1-6).

2. Jesus is Superior to Muhammad of Islam

Muhammad, the founder of Islam, admitted he was only a mortal prophet (Surah 6:50).

But Jesus proved to be God in at least two ways:

It is important to realize that Muhammad offered no sure hope for salvation. Instead, he gave only guidelines for working oneself into Allah’s favor, known as the five religious pillars (e.g., Surah 5:10).

By comparison, Christians understand that faith in Jesus and not works save us (Eph. 2:8-9) if we repent and accept him as our Lord (John 3:16).

3. Jesus in Contrast to Hinduism’s Gurus

In Hinduism, a guru is a teacher. In essence, he must help Hindus understand the sacred writings. The main ones are the Bhagavad Gita and the Upanishads.

Further, Jesus taught that there is only one God.

On the other hand, Hinduism worships 330 million gods (polytheism). And Hinduism teaches that each Hindu must reach godhood.

However, Hindus must work out their “salvation” on their own. Specifically, this process includes the maze of recurring karmic cycles of reincarnation.

Finally, they reach moksha.  Moksha, in effect, is the final escape from recurring reincarnations. And in this case means entering a state of oneness with the “ultimate reality,” called Brahman.

Christ teaches selfless love (Matt. 22:39). But orthodox Hinduism’s caste system ignores the suffering. Instead, it insists on leaving suffering people alone because it is their karma.

4. Jesus is Superior to Siddhartha Gautama (Buddha) of Buddhism

Buddhism began as an atheistic reformation movement within Hinduism. However, subsequent forms of Buddhism returned to the Hindu gods.

In contrast, Jesus taught that life is a gift from God. Therefore, we are to enjoy God now (John 10:10).

In contrast, Buddhism sees life as suffering. Therefore, the ultimate goal is eradicating individual personhood. This final loss of “self” occurs by reaching nirvana. And reaching nirvana is through the process of recurring reincarnations.

Confucianism is an ethical system and not a religion per se. In general, it promotes a virtuous life and societal peace and harmony.

The Confucian so-called Silver Rule is: “What you do not want others to do to you, do not do to them.” This rule is like Christ’s “Golden Rule” (Matt. 7:12).

Confucianism is a self-effort system believing humans are good and can reach perfection.

But Christianity claims we are all sinners (Rom. 3:23). Therefore, we need God’s grace for inner reconciliation with God through Jesus (2 Cor. 5:18)  before outward changes in actions are possible.

The Tao believes the world is full of conflicting opposites and manifestations. Therefore, the Yin and Yang represent all things existing as inseparable and contradictory opposites.

To understand the Tao means accepting that all opposites are one. Without a doubt, this belief is contradictory.

Lao Tzu’s philosophy denies the fundamental principle of logic. This principle is the “Law of Noncontradiction” (LON). The LON asserts the opposite of true is false.

Furthermore, Taoism asks each follower to relinquish their power to change things.

“because, if you confess with your mouth that Jesus is Lord and believe in your heart that God raised him from the dead, you will be saved. For with the heart one believes and is justified, and with the mouth one confesses and is saved.” (Romans 10:9–10, ESV)

On the other hand, if you are already a Christian, thank God for giving us Jesus. He is our “way,” our “truth,” and our “life” (John 14:6). He alone saves us from the hopelessness of all other worldviews.

PrevPreviousWhat Is a Worldview?
NextChristian Truth: The Ultimate Cheat Sheet!Next