What is the Tribulation? 16 Facts You Must Know!

By Binmin
Published 2 months ago

Fact 1: Definition of the Tribulation

The “Tribulation” is an often talked about but seldom understood end-time event. The study of end times is called eschatology. And if you are like most people understanding the terminology and events of eschatology can be challenging.

In this article, I hope to demystify one of the most important eschatological events, the Tribulation.

The Tribulation refers to a seven-year period of God-sent devastating judgments associated with other end-time events.  It includes many persons, places, and events that most people have heard about but don’t know where they fit into end times. For example, you have heard of:

I hope you are getting excited to learn about these things! 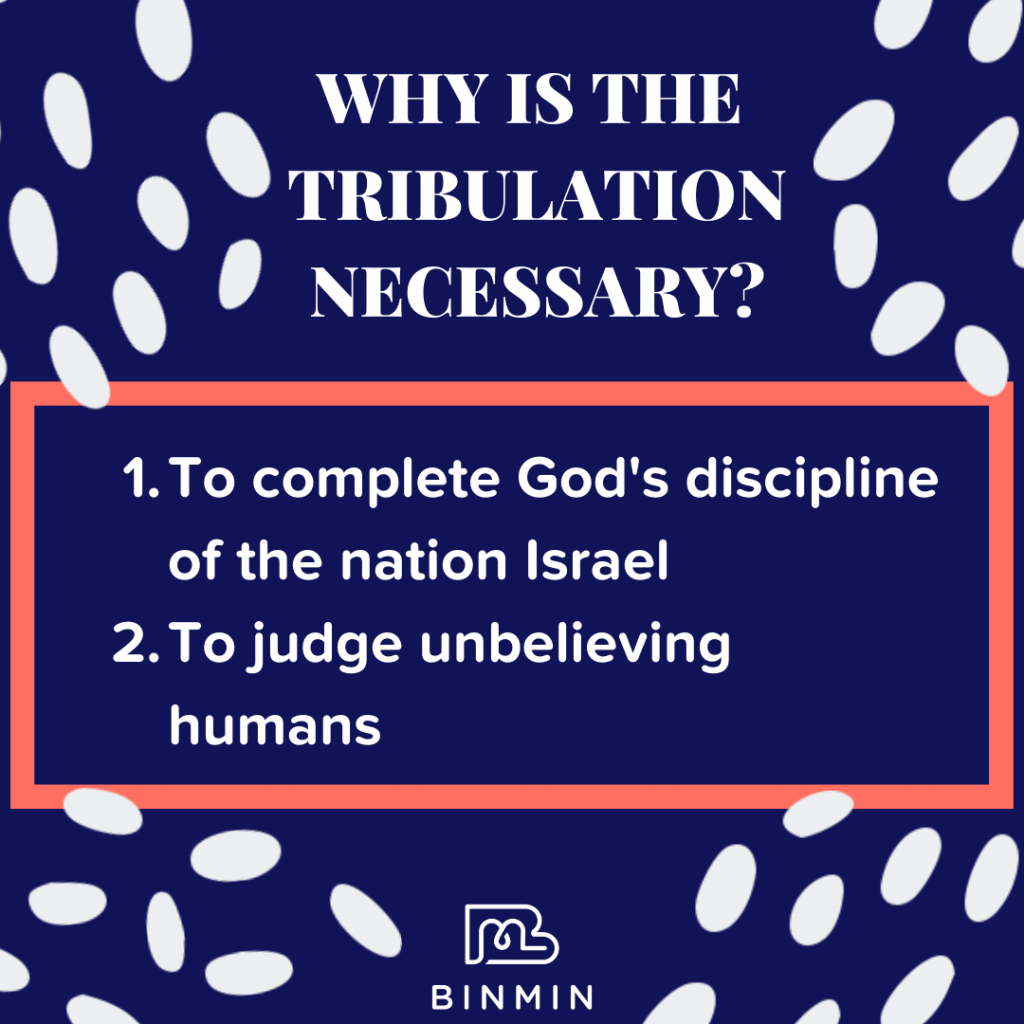 As we delve deeper into the judgments that God sends against humans, you may wonder, “Why does God have to be so severe? I thought God is “love” (1 John 4:16)? Your characterization of God is only partly right. God has many other attributes, including being infinitely holy (1 Pet. 1:15; 1 John 1:5). He demands justice for the sins against him by those who choose to reject him.

Therefore, the Tribulation must accomplish at least two aspects of God’s plan. 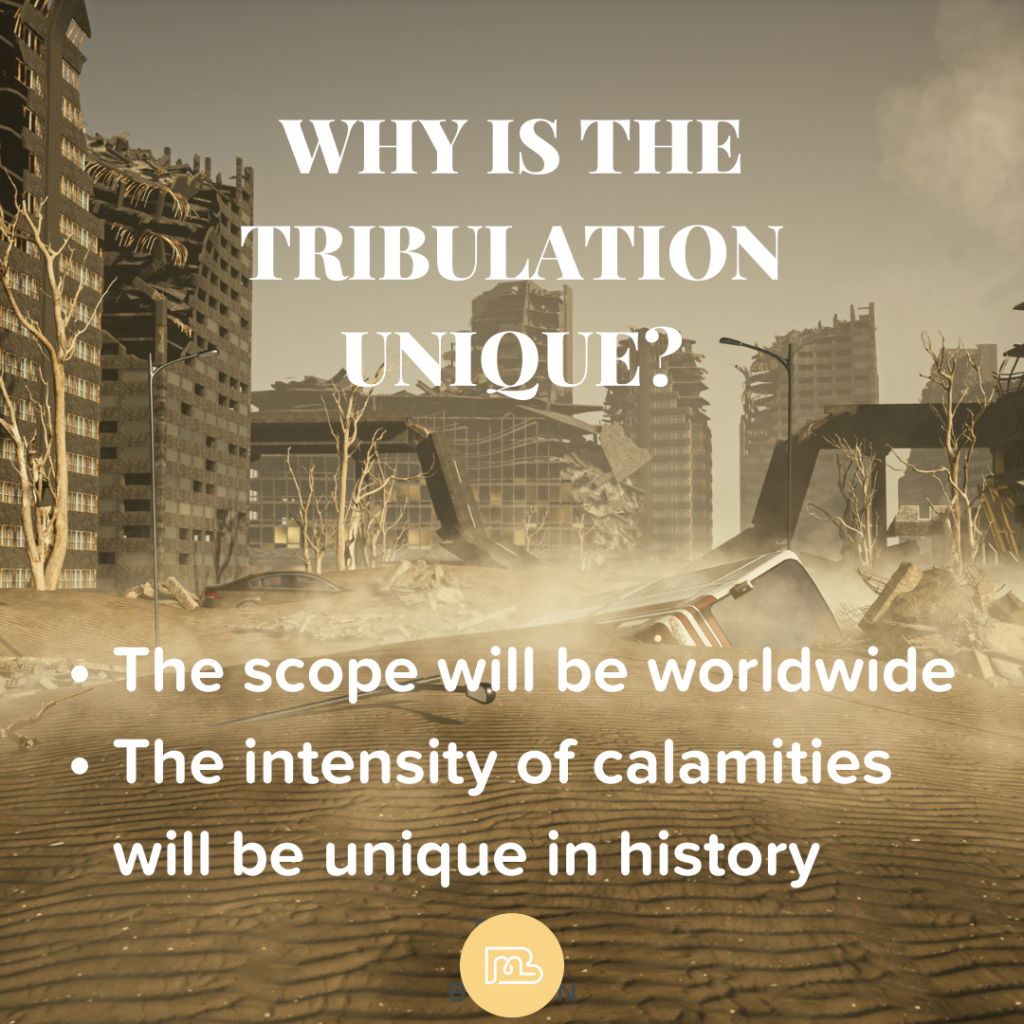 The Tribulation is unique in its scope and intensity.

Unlike any time in history, during the Tribulation, humans:

Fact 4: The Occurrence of the Tribulation

All Christians believe the Tribulation occurs before Jesus’ Second Coming.

Beyond that, Christians differ depending on their millennial view. The Millennium is the 1000 years referred to in Revelation 20:2-6. Christians debate whether Jesus’ Second Coming is before or after the Millennium.

Let me explain. There are three main millennial views.

Of the three millennial views, premillennialism is most closely related to the Tribulation.

Premillennial Views on the Tribulation

There are three premillennial views. They differ on the timing of the Rapture to the Tribulation.

What is the Rapture? It 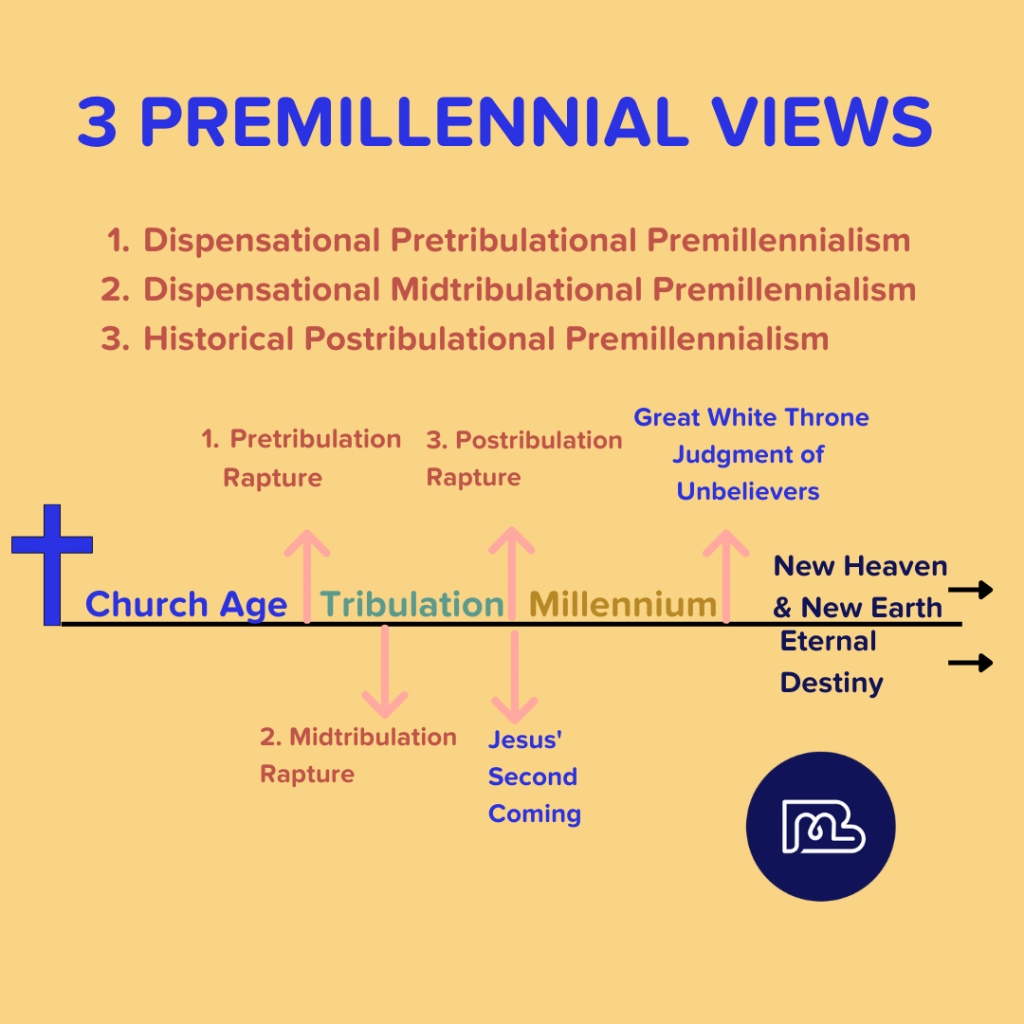 Postmillennial and Amillennial Views on the Tribulation

Postmillennialism does not believe that the Tribulation is a singular seven-year event. Instead, it symbolizes all the trials, challenges, and persecution believers have endured throughout history.

Amillennialism believes the Tribulation is the persecution faced by Asian Christians of John’s time, symbolic of trials throughout history.

On the other hand, some postmillennialists and amillennialists have a similar view of the “Great Tribulation.” They consider it a brief, indefinite period at the end of this age. They usually identify it with the revolt of Gog of Magog in Revelation 20:8–9.

Fact 5: Important Persons in the Tribulation 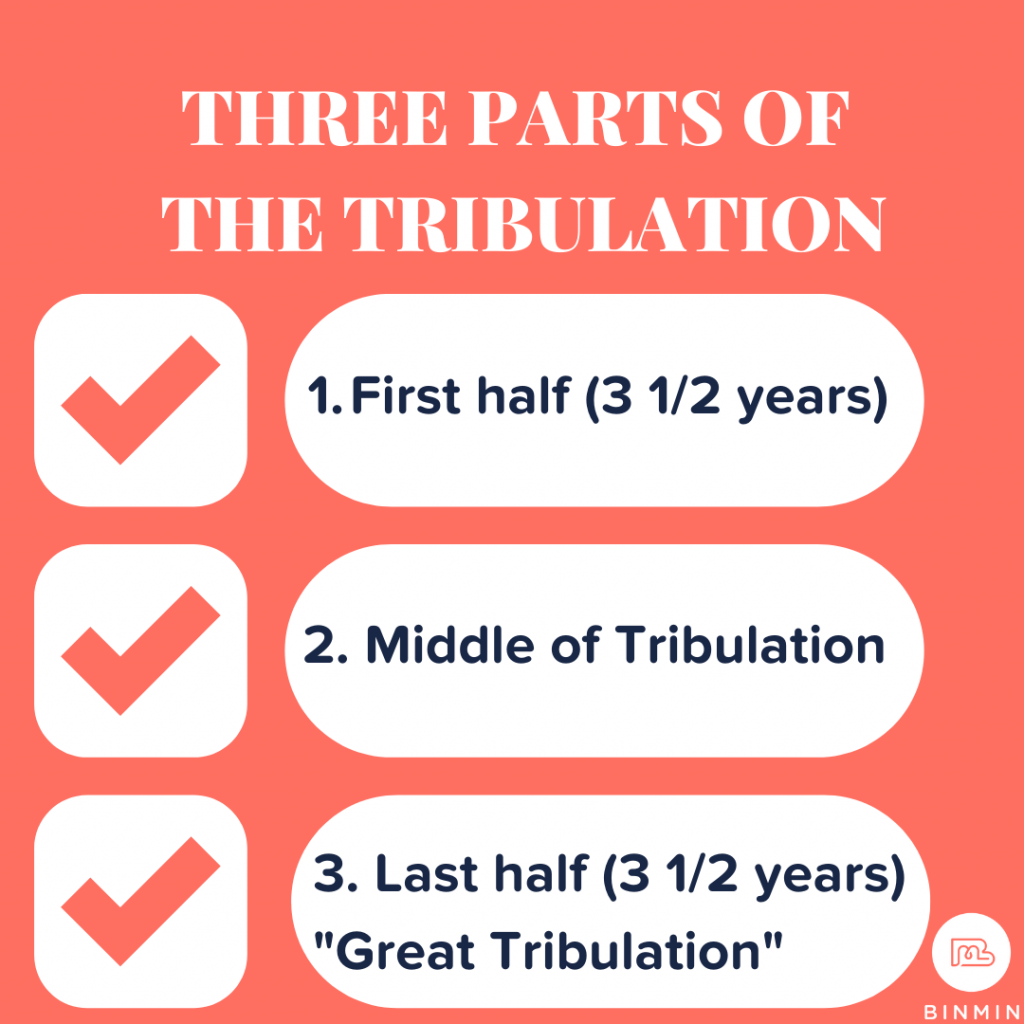 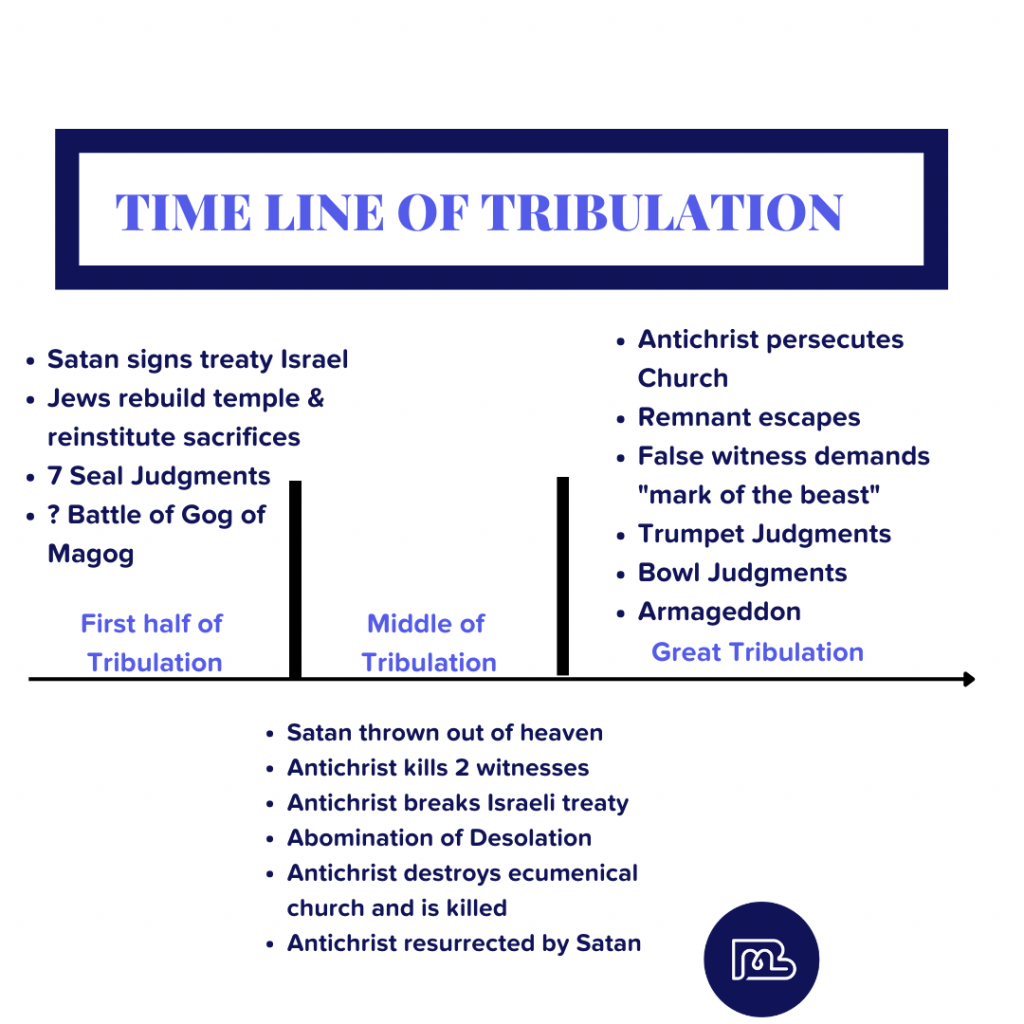 I. The First Half of the Tribulation

The Tribulation begins when the Antichrist signs a seven-year treaty with Israel (Daniel 9:27).

Although the Tribulation begins with a promise of political peace, it’s all a façade. It sets off a series of God’s judgments against the world. 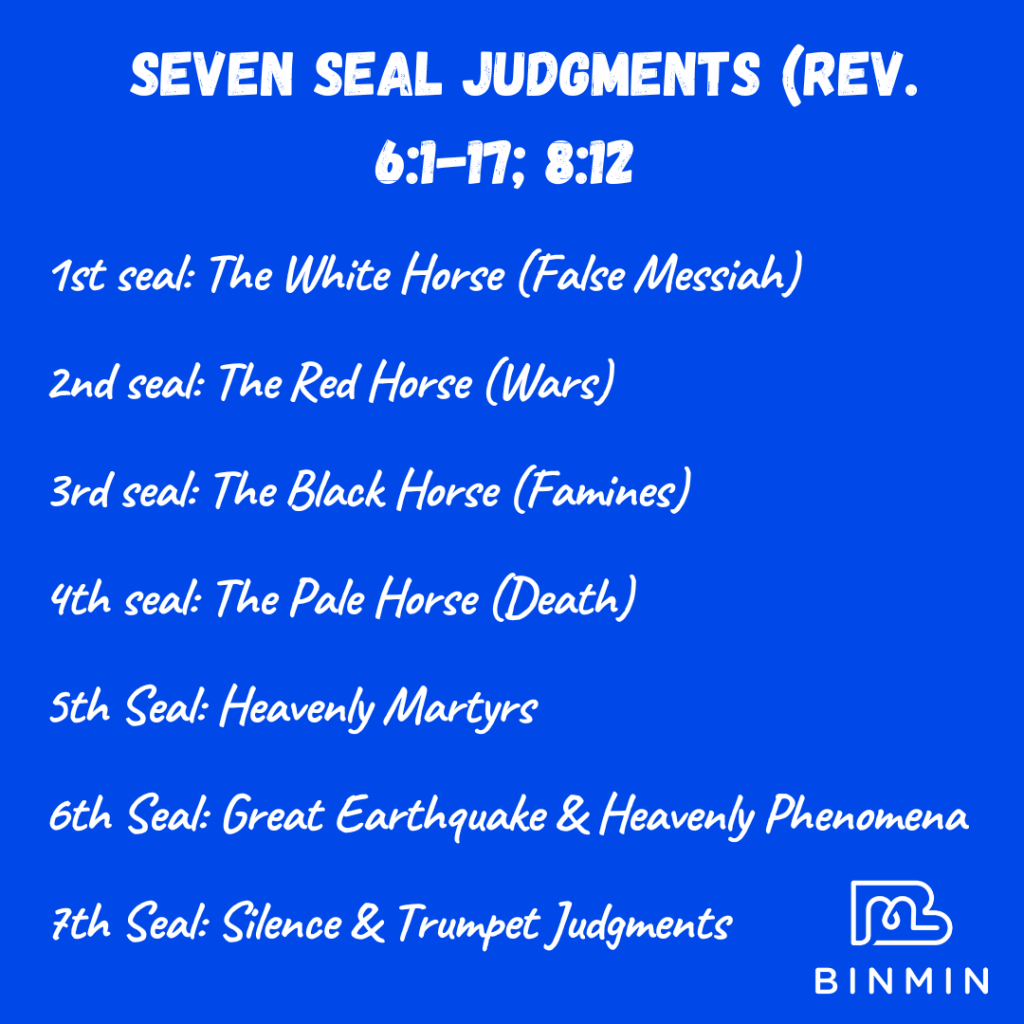 Jesus opens the first of the seven-sealed scroll. And a white horse ridden by the Antichrist appears.

In this judgment, there will be a great world war

The third judgment is still probably in the first year of the Tribulation. It brings famine, inflation, and poverty to the world. (Rev. 6:5–6; cf. Matt. 24:7). These are a result of the great world war (the second seal judgment)

The fourth seal is a pale horse ridden by Death with Hades close behind. One-fourth of the population of the earth is destroyed by war, famine, disease, and wild beasts (Rev. 6:7–8; cf. Matt. 24:7–8)

The vantage of the fifth seal is in heaven. John sees innumerably martyred Christians. They have been killed by the Antichrist and ecumenical church (Rev. 17:6) because of their testimony (Rev. 6:9–11; cf. Matt. 24:9–11). The martyrs:

If you are a pretribulational premillennialist, you believe that all living Christians are removed from the earth (Raptured) before the Tribulation. So you may reasonably ask:

Firstly, there are the “two witnesses” (Rev. 11:3-14). They are like Moses and Elijah. They preach and witness during the first half of the Tribulation.

Therefore, the evangelism of the whole world (Matt. 24:14) will come from the following:

These sources will convert an innumerable number of Tribulation Christians (Rev. 7:9-10)

These judgments produce terror in all humans.

Fact 7: The Battle of Gog of Magog

Gog of Magog refers to an end-time war. It involves a confederation of nations against Israel (Ezek. 38–39). The countries involved were initially populated by Japheth and Ham descendants (Gen. 10:2-7)

Pretribulational premillennialists debate the timing of the battle. It could occur either:

II. The Middle of the Tribulation

Fact 8: Satan is Thrown Out of Heaven

The first act of the Antichrist in the middle of the Tribulation is to kill the two witnesses (Rev. 11:3–13).

Fact 10: The Antichrist Breaks Treaty with Israel and Desecrates Temple

About halfway through the seven years, the Antichrist will

The Antichrist and ten-nation confederation will destroy the ecumenical church (17:1-18).

Once restored, the Antichrist pursues his ungodly agenda (Rev. 13:5–7). He will:

III. The Last Half of the Tribulation: “The Great Tribulation” (Rev. 7:14)

The Satanically led Antichrist intensifies his persecution of Israel (Rev. 12:13–17).

Fact 12: False Prophet Demands the “Mark of the Beast” to Do Business

Christians who do not take the mark of the Antichrist:

Next, God pours out his trumpet and bowl judgments. 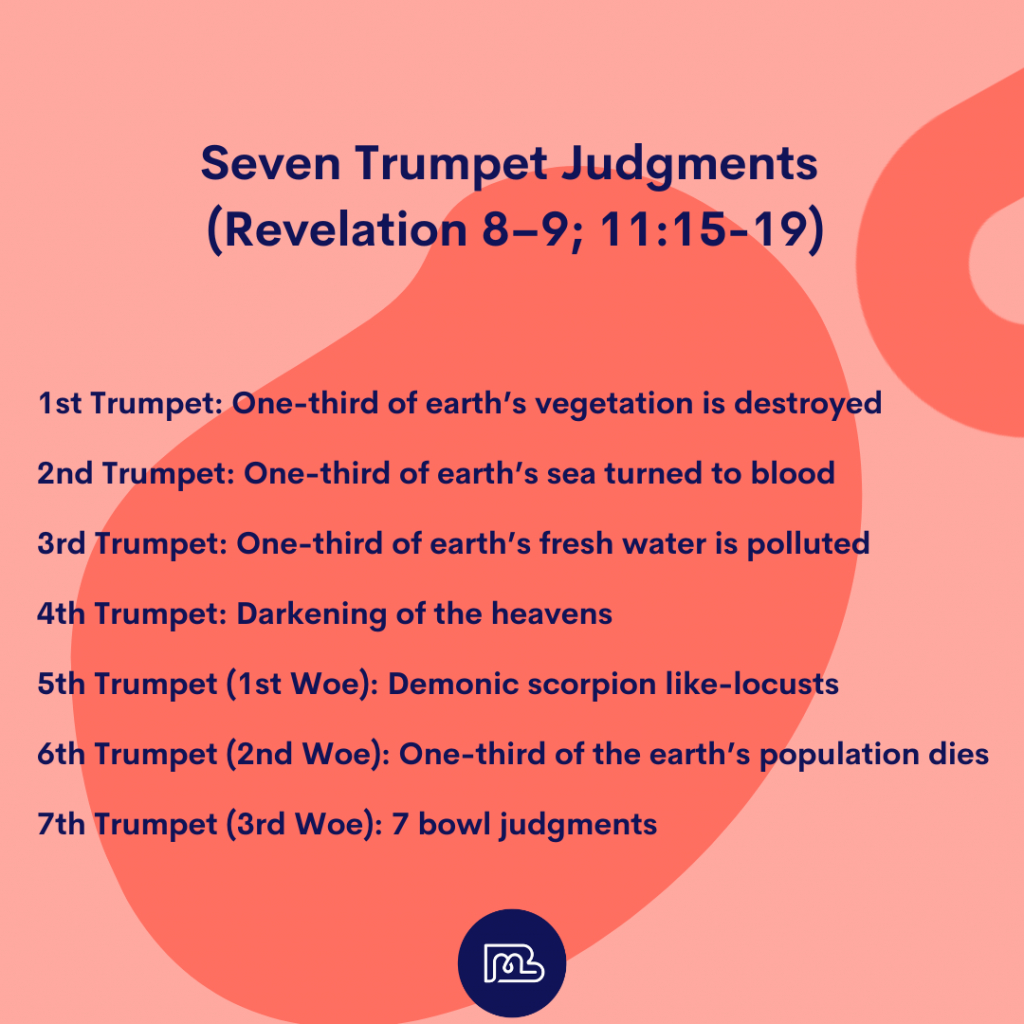 One-third of the earth’s vegetation (trees and grass) is destroyed by hail, fire, and blood. Famine will follow.

The third trumpet judgment involves a vast “star” (meteor) named “Wormwood.” This meteor pollutes one-third of the world’s fresh water. As a result, many die from the contamination.

The fourth trumpet judgment leads to:

The fifth trumpet judgment introduces the first woe: demonic scorpion-like locusts attacking and torturing humans. But even though humans may seek death through suicide, they cannot commit it.

The sixth trumpet (second woe) unleashes 200 million demonic horsemen (Rev. 9:16). They will kill one-third of the earth’s population. The remaining humans will not turn to God. They only harden their hearts against him (Rev. 9:13-21).

The seventh trumpet judgment (third woe) occurs in the last weeks or months of the Tribulation. It accompanies the bowl judgments (Rev. 16:1–21).

This sixth bowl judgment ends in the battle of Armageddon (16:13–16) described in Revelation 19. Armageddon ends with Christ and his heavenly armies destroying his opponents. 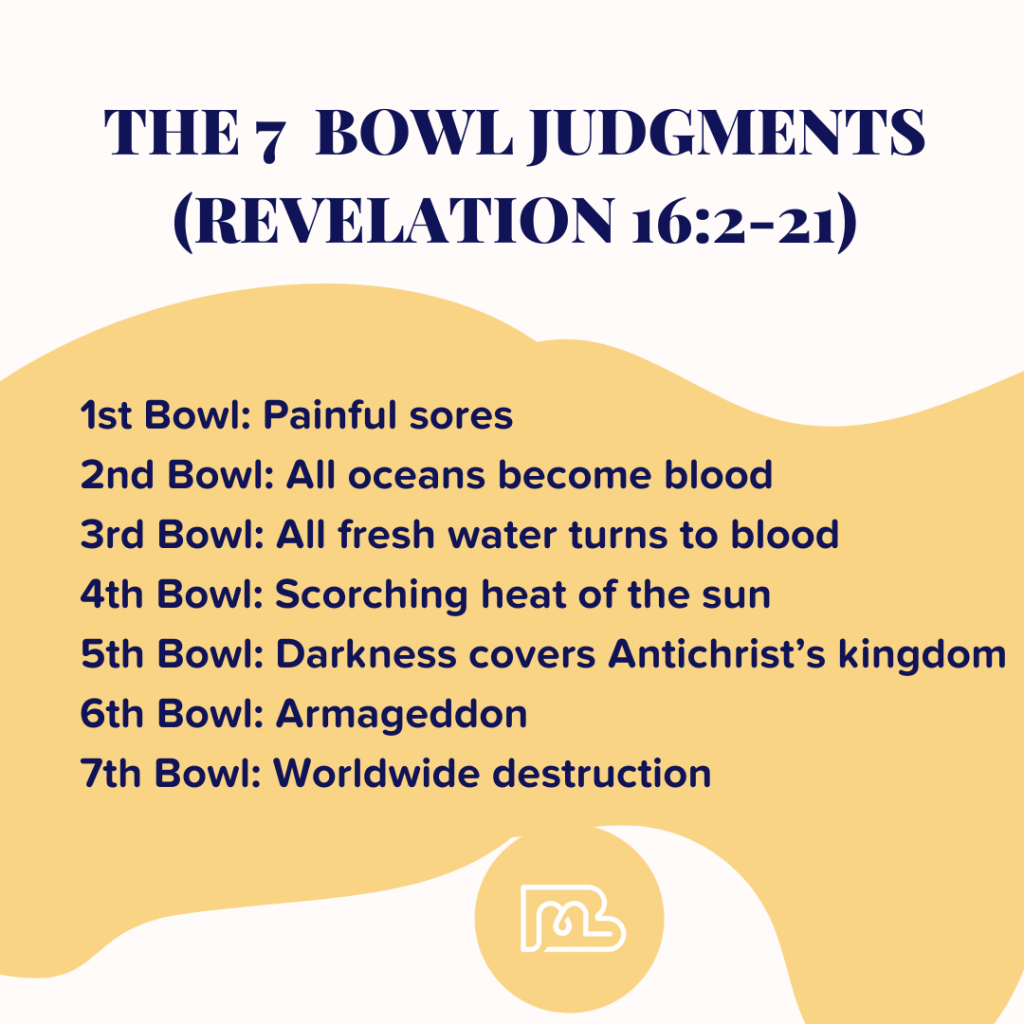 The first bowl judgment afflicts all Antichrist followers bearing his mark. They experience painful and harmful (possibly cancerous) sores and curse God (Rev. 16:8). These sores will remain until the fifth bowl judgment (Rev. 16:11) because the Antichrist cannot cure them.

The second bowl judgment results in all oceans (72% of earth’s surface) turning to blood. Every living thing in the sea dies.

The third bowl judgment results in all freshwaters turning to blood. Both metaphorically and literally, those who spill the blood of Jesus’ followers must drink blood (Rev16:5-5-7) .

The fourth bowl judgment involves the sun’s heat intensifying and scorching humans. Despite this, unbelievers do not repent.

The Fifth Bowl Judgment: The Antichrist’s capital and his kingdom are covered in supernatural darkness (Rev. 16:10–11)

The fifth bowl judgment plunges the Antichrist’s capital and kingdom into darkness. His followers gnaw their tongues because of their pain and sores. Why? Becasue pain is always worse in the dark (Rev. 16:10-11). But rather than repent, these suffering and unsaved humans curse God..

The sixth bowl judgment is preparation for Armageddon (Rev. 16:16)

There are three battlefields.

But the Antichrist’s armies are not attacking Israel alone. They are warring against Jesus and his heavenly army (Rev 17:14; 19:11-14).

As a result, Jesus:

There will be unheard of natural catastrophes with the cry from God’s throne, “It is done!” (Rev. 16:17-21). These natural disasters include:

The judgments have continually increased in severity. By the end of the seventh bowl judgment, the Tribulation will be over.

Tragically, despite the judgments, unbelievers continue to curse God. They will not repent (Rev. 16:9, 11).

Following the bowl judgments, John is given a vision by one of the seven angels who poured out a bowl judgment.

Premillennialists believe that Jesus’ Second Coming precedes his 1000-year reign on earth. At his return, Christ will fulfill his unconditional covenants to Israel, including:

Jesus’ Second Coming, Satan’s defeat, and the Great White Throne Judgment occur at the very end of time. After these events, God replaces the old sin-cursed heaven and earth (2 Pet. 3:10) with a new heaven and new earth (2 Pet. 3:13; Rev. 21:1-50) for believers.

The events of the Tribulation are frightening. But not for Christians. Instead, we should be hopeful and convicted (Dan. 12:9-12).

As we eagerly await Jesus’ Second Coming should want to evangelize others attractively. Why? Because knowing what lies ahead for non-Christians in the Tribulation should make us grieve missed opportunities to share the gospel.

If we believe God’s word and know of his love for the lost, we, too, should want others to avoid the Tribulation judgments.

—, and Ron Rhodes. Conviction without Compromise. Eugene OR: Harvest House, 2008.

PrevPreviousUnderstanding the Rapture of the Church: 7 Questions and Answers
Next7 Facts for Understanding & Proving the Inspiration of the BibleNext