5 Truths for Understanding the Trinity

Understanding the Trinity can be challenging and confusing. Why?

Because our triune God is eternal and infinite, and we are finite. How can we ever hope to completely understand the Trinity? We can’t.

The Trinity is a mystery, meaning we only know about it because it is revealed in the Bible. And while we can never completely comprehend the Trinity, we can understand many important things about our God. 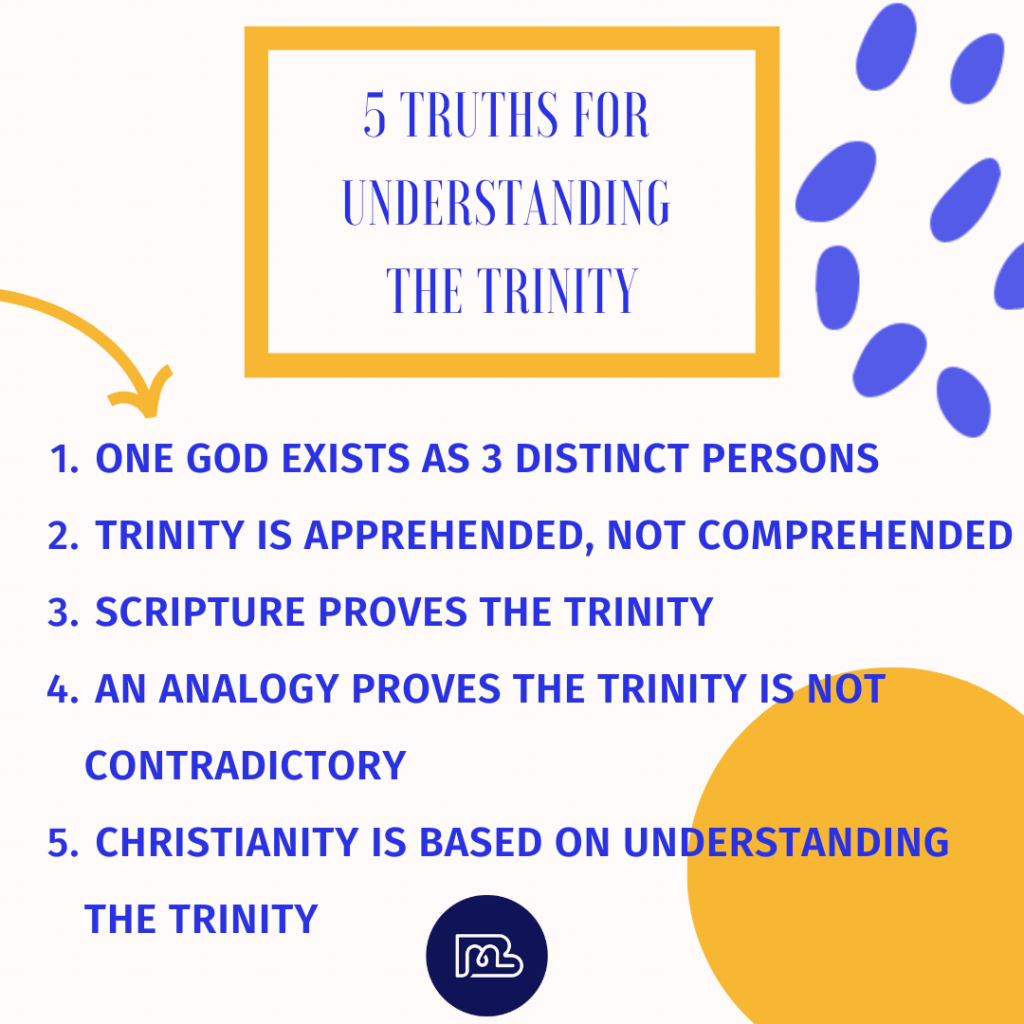 a. Christianity is monotheistic

Christians believe in only one God. That means that Christianity is a monotheistic religion. We worship only one eternal and infinite God. Jesus affirmed monotheism by quoting the Shema (Deut. 6:4) in Mark 12:29. “Hear, O Israel: The Lord our God, the Lord is one.”

b. The Christian God exists as a Trinity

c. Skeptics Claim the Trinity is too Complicated and Contradictory

Understanding the Trinity may seem hard to grasp if you are a new Christian. And skeptics often criticize the Trinity for two reasons:

Before tackling those criticisms of the Trinity, we need to define two terms. These terms are two “secrets” to help us understand the Trinity. The two terms are “comprehend” and “apprehend.”

a.    Understanding the Trinity is Like Putting the Ocean in a Hole on the Beach

How is knowing these two words helpful in understanding the Trinity?

The famous painting “St. Augustine at the Seashore” represents a legend. It shows Augustine walking along a beach, lost in thought. He was puzzling over comprehensively understanding the Trinity.

He saw a young boy running back and forth to the ocean filling his bucket. The boy then emptied his bucket of water into a hole he had dug in the sand.

Augustine asked, “What are you doing.” The boy replied, “I’m trying to put the ocean into this hole.”

Augustine realized that the boy’s task was futile. In the same way, his effort of trying to understand the infinite with a finite mind. No human could comprehend the Trinity in our tiny human minds. (1)

b.    The Trinity can be Apprehended, not Comprehended

Of course, God is complicated! The Trinity is a Christian “mystery.” A mystery is something that an infinite and eternal God allows us to know about him only because it’s in the Bible.

So comprehensively understanding the Trinity is impossible with our finite minds (Rom. 11:33–36). But complexity and incomprehension are not the same things! C. S. Lewis addressed this issue:

“If Christianity was something we were making up, of course, we could make it easier. But it is not. We cannot compete, in simplicity, with people who are inventing religions. How could we? We are dealing with fact. Of course, anyone can be simple if he has no facts to bother about” (2)

We can apprehend that God exists as three distinct persons sharing one divine nature or essence (Matt. 3:16-17; John 10:30). Each member has a different role. For example:

Here’s another example of a difference between the roles of the Son and the Holy Spirit:

4.    An Analogy that Proves the Trinity is NOT Contradictory

The critic says that the Trinity is contradictory. They are wrong. Scripture is clear that there is one God who exists as three Persons. The “three-in-one” of the Trinity is not a contradiction.

Each number refers to a different aspect of the Trinity.

These are different from each other.

In understanding the Trinity, we can “apprehend” enough from Scripture and logic to show that the Trinity is not contradictory.

Is that confusing? Consider this diagram of a triangle:

Distinguishing between three Persons and one divine nature resolves any misunderstanding.

That would be contradictory.

5.    Christianity is Based on Understanding the Trinity

The Trinity is so distinct from any other worldview that it should astonish you. Why?

There is no way that the mystery of the Trinity is a human invention. The God of all things chose the Bible to share his incredible nature with us. And Scripture shows how he interacts with us and has accomplished our salvation.

Why not spend some time reading through the Gospels or the New Testament letters? And see if you can uncover how the Father, the Son, and the Holy Spirit are at work. And then worship God with an even greater understanding of who he is.