Now that I have your attention, let me start at the beginning

How? History proves the resurrection in two ways: 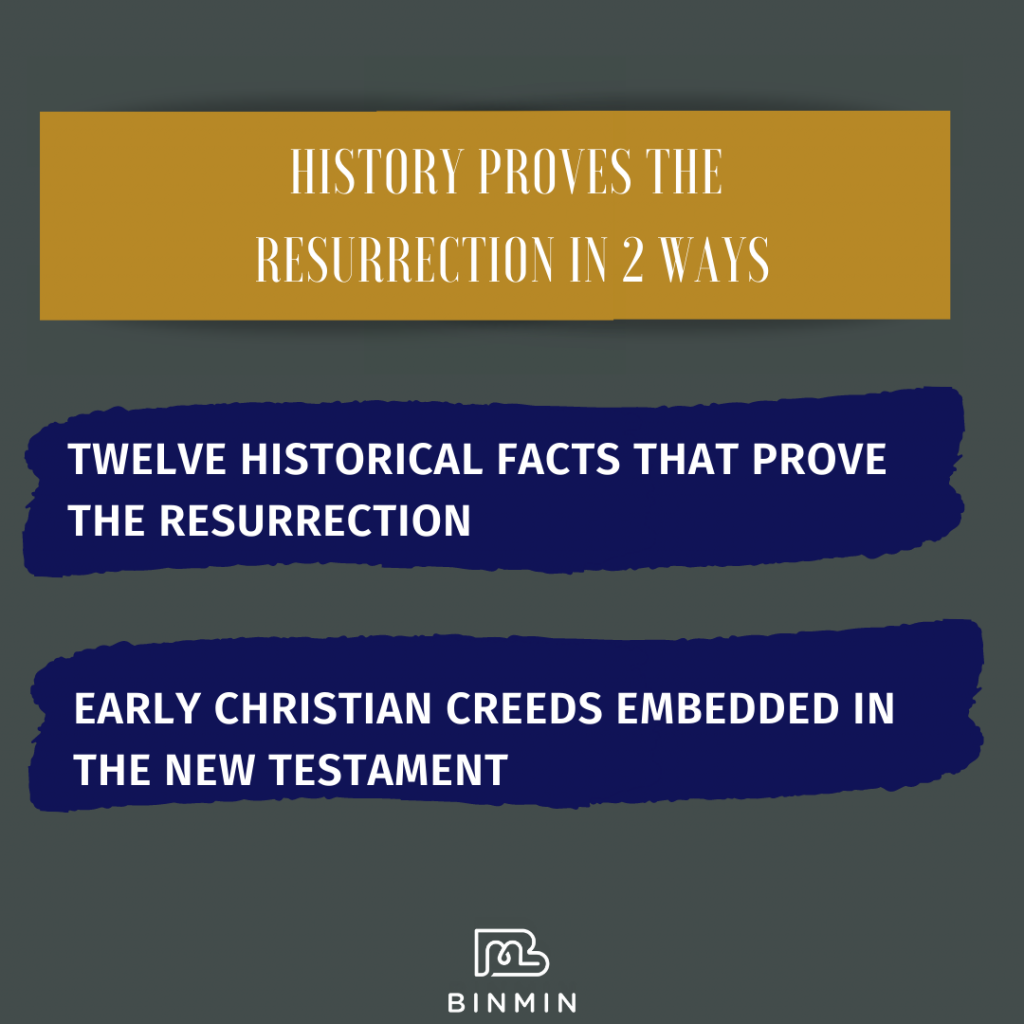 These New Testament creeds are very early evidence. They date back to soon after the resurrection. 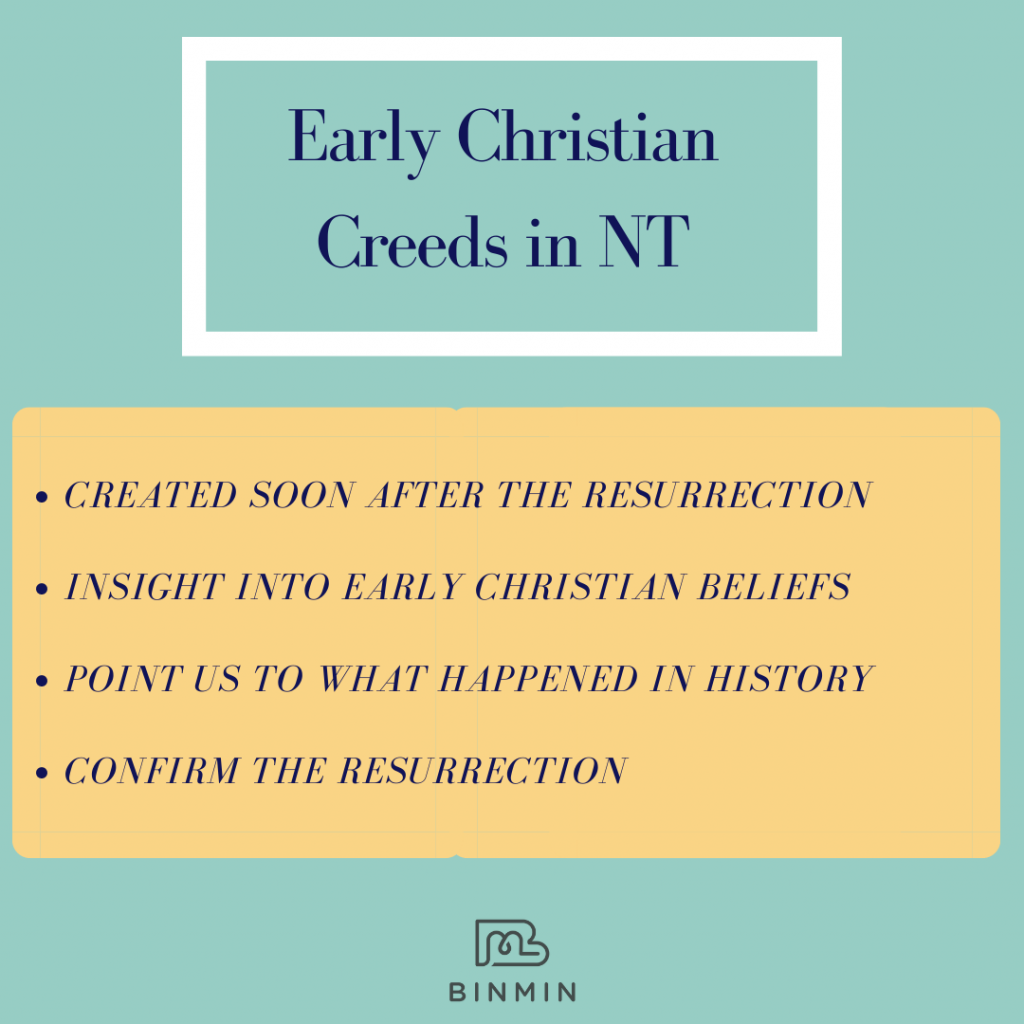 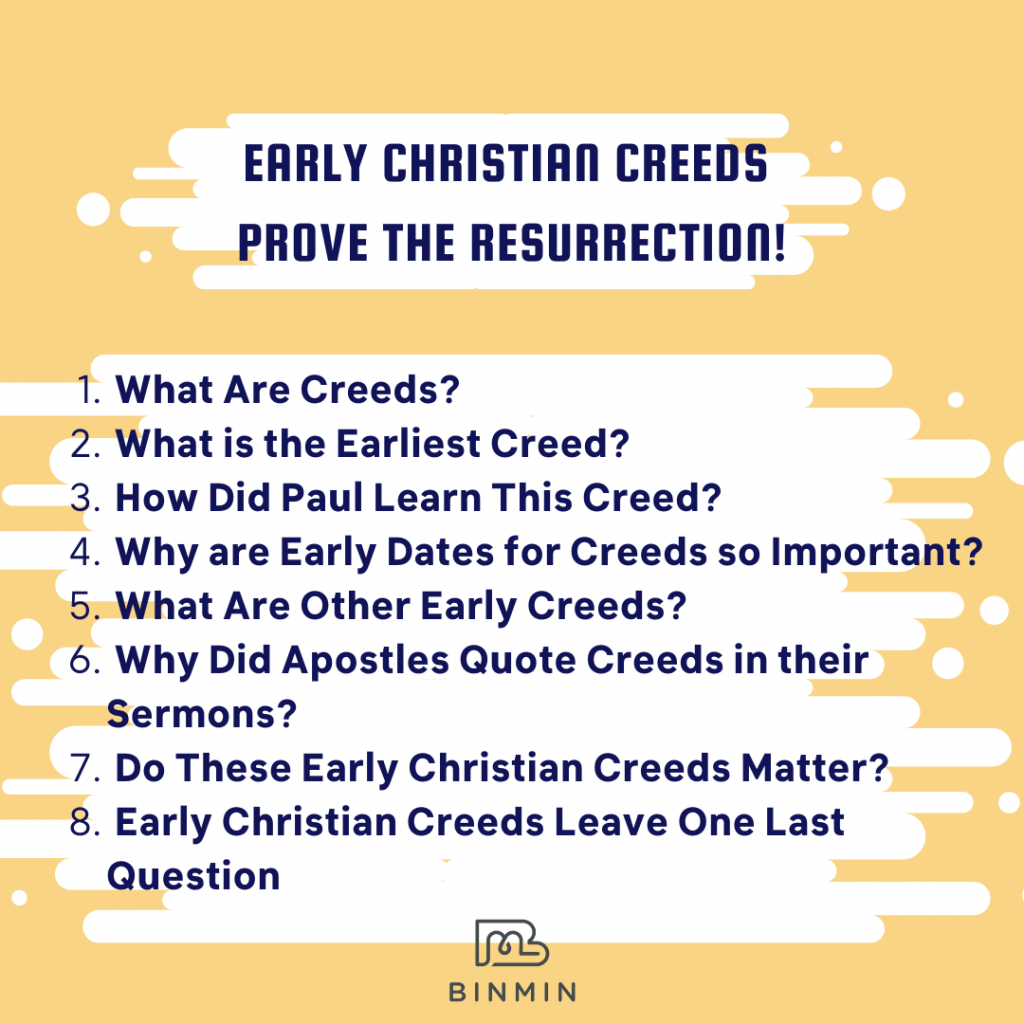 Many first-century people were illiterate. Meaning memorization was a critical way to pass on information.

How did these creeds work?

Meaning the creeds about Jesus and his resurrection were in use before the Apostles wrote the 27 books of the New Testament.

And so these creeds are some of the earliest reports about Jesus because they span from AD mid-30s to AD 50 (Jesus’ resurrection was AD 30-33).

2. What is the Earliest Christian Creed in the Bible?

The Apostle Paul shares the earliest creed in the New Testament in 1 Corinthians 15:3-8:

“For I delivered to you as of first importance what I also received:

that Christ died for our sins in accordance with the Scriptures,

that he was buried,

that he was raised on the third day in accordance with the Scriptures,

and that he appeared to Cephas, then to the twelve.

Then he appeared to more than five hundred brothers at one time, most of whom are still alive, though some have fallen asleep.

Then he appeared to James, then to all the apostles.

Last of all, as to one untimely born, he appeared also to me.”

Many scholars believe that this creed originated in the mid-30s. That places it only three to eight years after Jesus’s resurrection (AD 30-33)!

3. How Did Paul Learn This Early Christian Creed?

It was at that meeting he learned this creed. Meaning this creed had been used five to seven years after Jesus’s resurrection!

4. Why is this Early Date of the Christian Creed So Important?

This early date proves that the historical information surrounding Jesus’s resurrection is accurate.

After all, this early creed covers the essentials of the Christian faith:

The creed proves these facts were common knowledge. And they originated within a few short years of the time they happened.

Why is that important?

5. What Are Some Other Early Christian Creeds?

Here are some other early Christian creeds found in the New Testament:

6. Why Did The Apostles Quote Early Christian Creeds In Their Sermons?

What was the apostles’ message? Christ’s resurrection in Jerusalem!

These early proclamations of Christ’s resurrection are critical to its truthfulness. These sermons reveal a dramatic transformation of the frightened disciples into bold preachers.

Only one thing can explain that transformation. The disciples had encountered the risen Christ!

7. Do These Early Christian Creeds Matter?

Early Christian creeds came from eyewitnesses only a few years after the resurrection. New Testament books contain these creeds proving Jesus was the center of the apostles’ message (1 Cor. 15:1-4).

No one can argue against the apostles experiencing the resurrected Jesus. And if it is irrefutable that Jesus did rise from the dead, he must be God.

That leaves an essential question for modern-day Christians: Does this evidence of the resurrection inspire you as it did first-century Christians? When you hear that Jesus rose from the dead, do you want to share the good news about Jesus with others?

We must continue to share our common belief in the risen Jesus so we can remember him, praise him, and be stirred to share him with others.

PrevPreviousWhy did Jesus Have to Die? Four Reasons
NextIs the Trinity in the Bible? 6 Reasons We Can Say Yes!Next