8 Facts About Christmas and Paganism

Do you know there are claims about an association between Christmas and paganism? In other words, some people want you to actually believe that Christmas is a pagan holiday.

If you are aware of these accusations, what do you think of them?

Let me start by reassuring you. There is no need to worry about these claims. 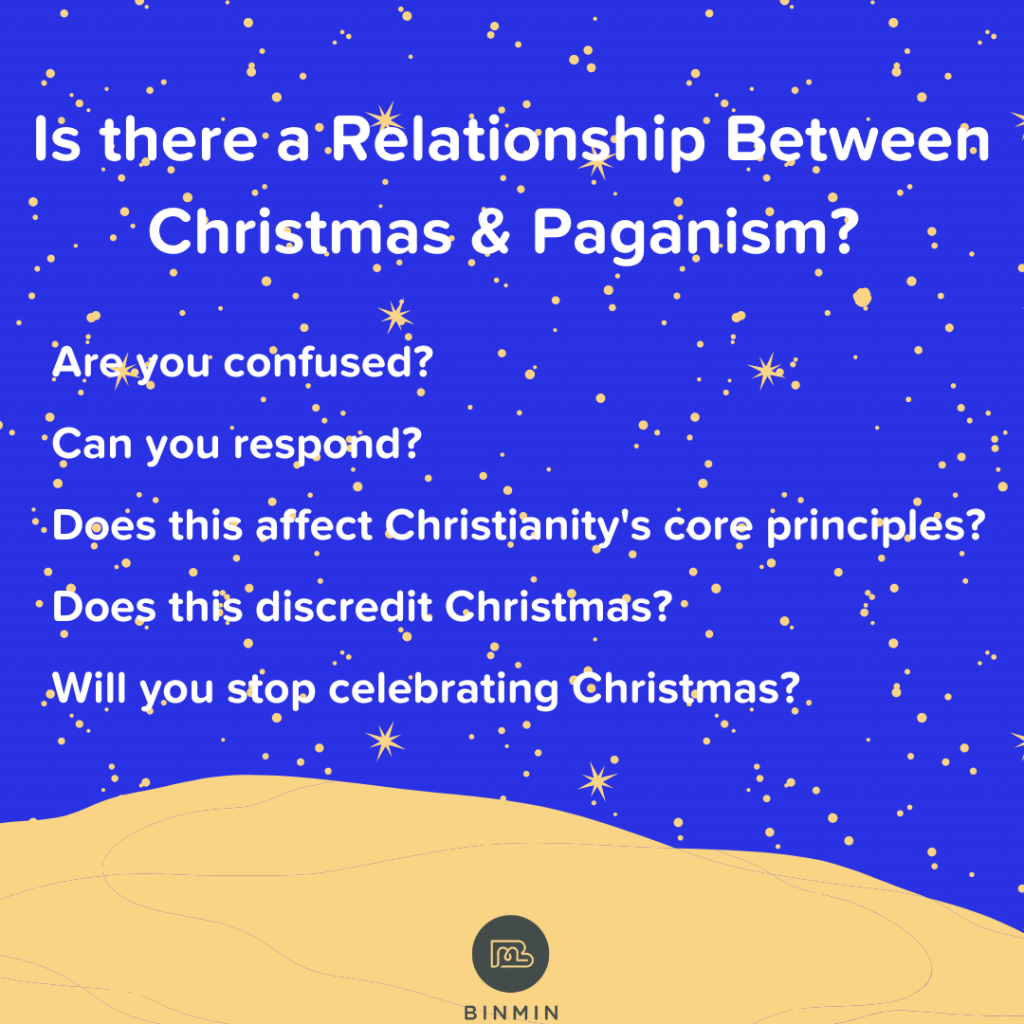 How Do You View Christmas?

What does the Christmas season mean for you?

Conversely, for many people, Christmas represents:

The Importance of Christmas

Before we tackle the topic of Christmas and paganism, let me explain why Christmas is so important.

Regardless of whether you love or hate the Christmas season, let’s look at the real meaning of Christmas. 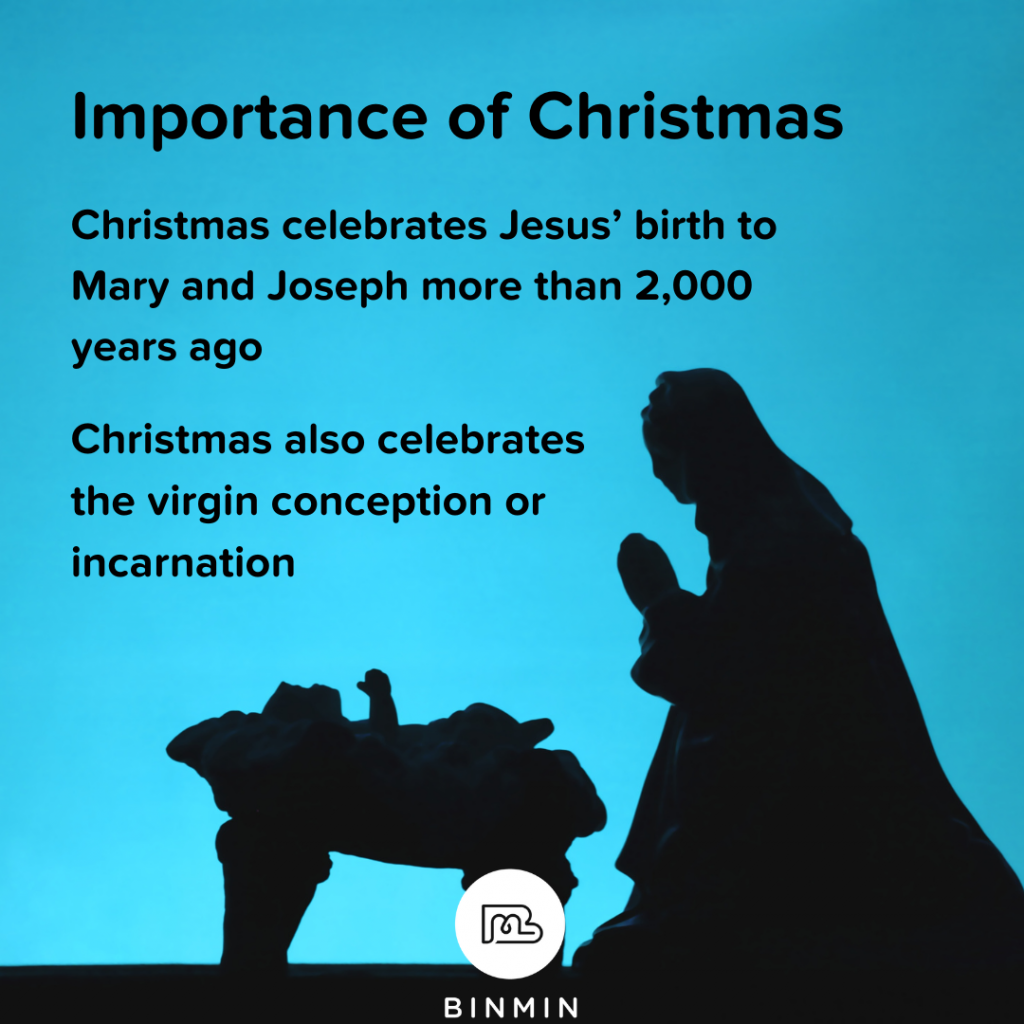 Most importantly, Christmas is the annual celebration of Jesus’ birth. Christ’s birth occurred more than 2,000 years ago to a poor couple in a Bethlehem manger.

Without a doubt, there are many reasons to celebrate Christ’s birth, including. 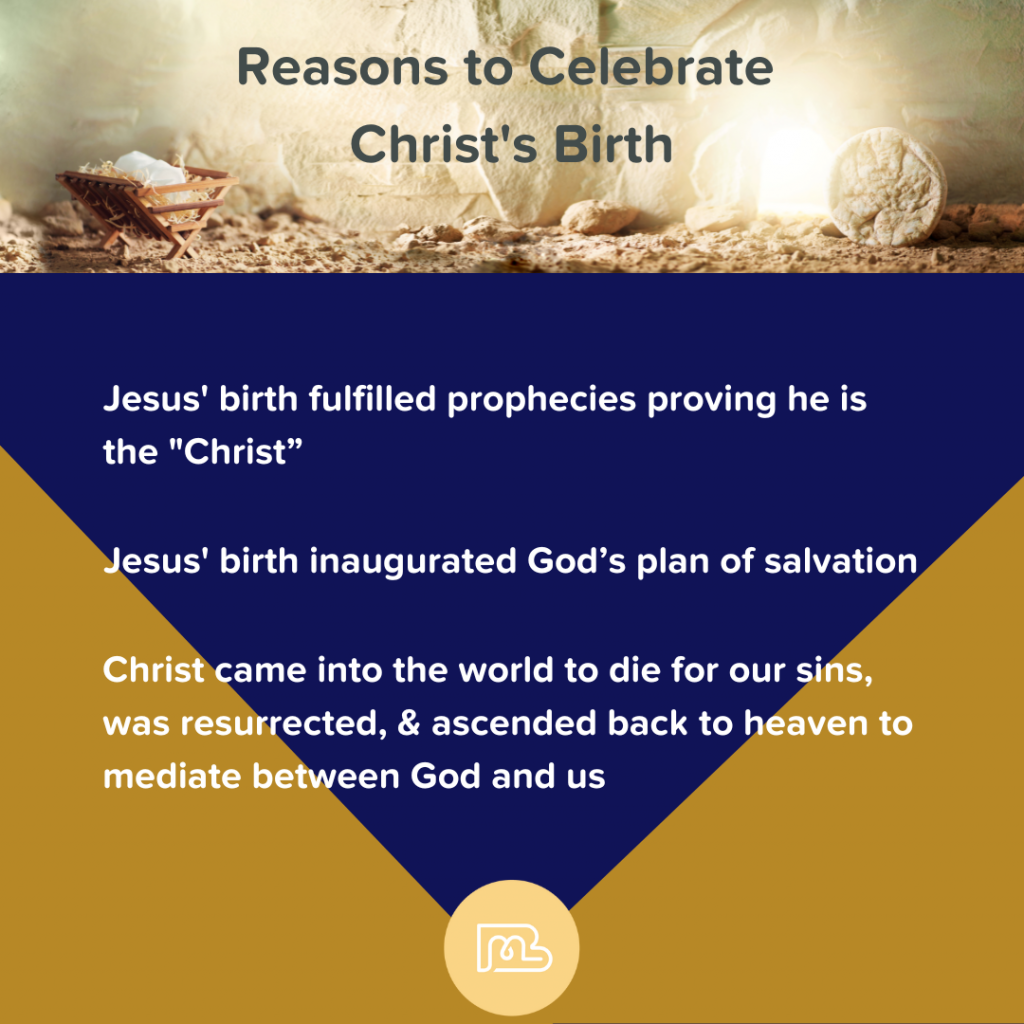 Have you received pushback for sharing the real reason for Christmas?

Despite the pushback, one thing is undeniably true! Jesus was miraculously conceived and born to a virgin!

Paganism is not Meant Pejoratively

To clarify, when I use the term pagan, I am not being mean-spirited. In fact, there are modern-day pagans and neo-pagans.

But to be clear, in this article, my use of “paganism” refers to ancient non-Christian beliefs and practices.

The term paganism was, at first, coined by fourth-century Christians. It applied chiefly to Romans practicing polytheism (the worship of many gods).

To be sure, the word paganism has subsequently evolved into anyone adhering to non-Christian beliefs.

Furthermore, “paganism” is not unique to Christianity 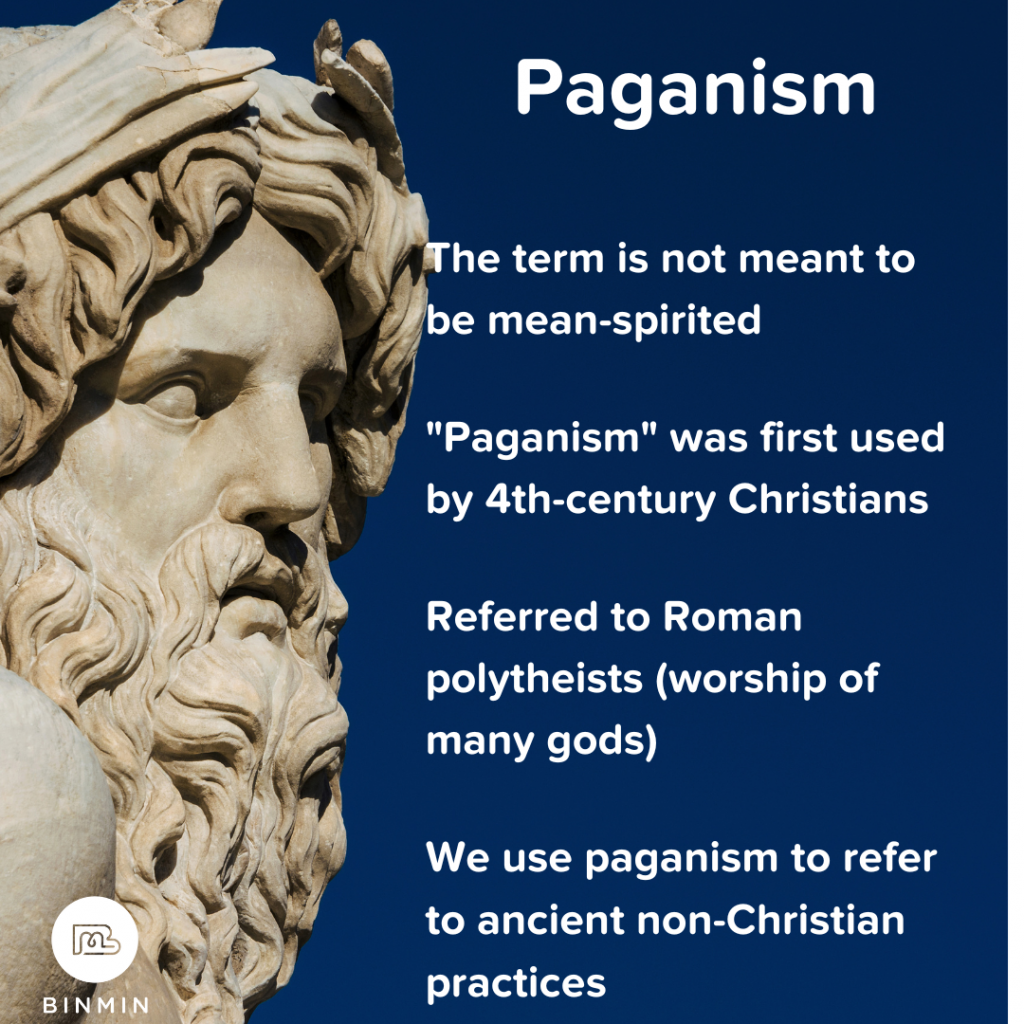 Eight Facts About Christmas and Paganism

Because of the controversy surrounding the relationship between Christmas and paganism, I will present eight facts that should answer your questions. 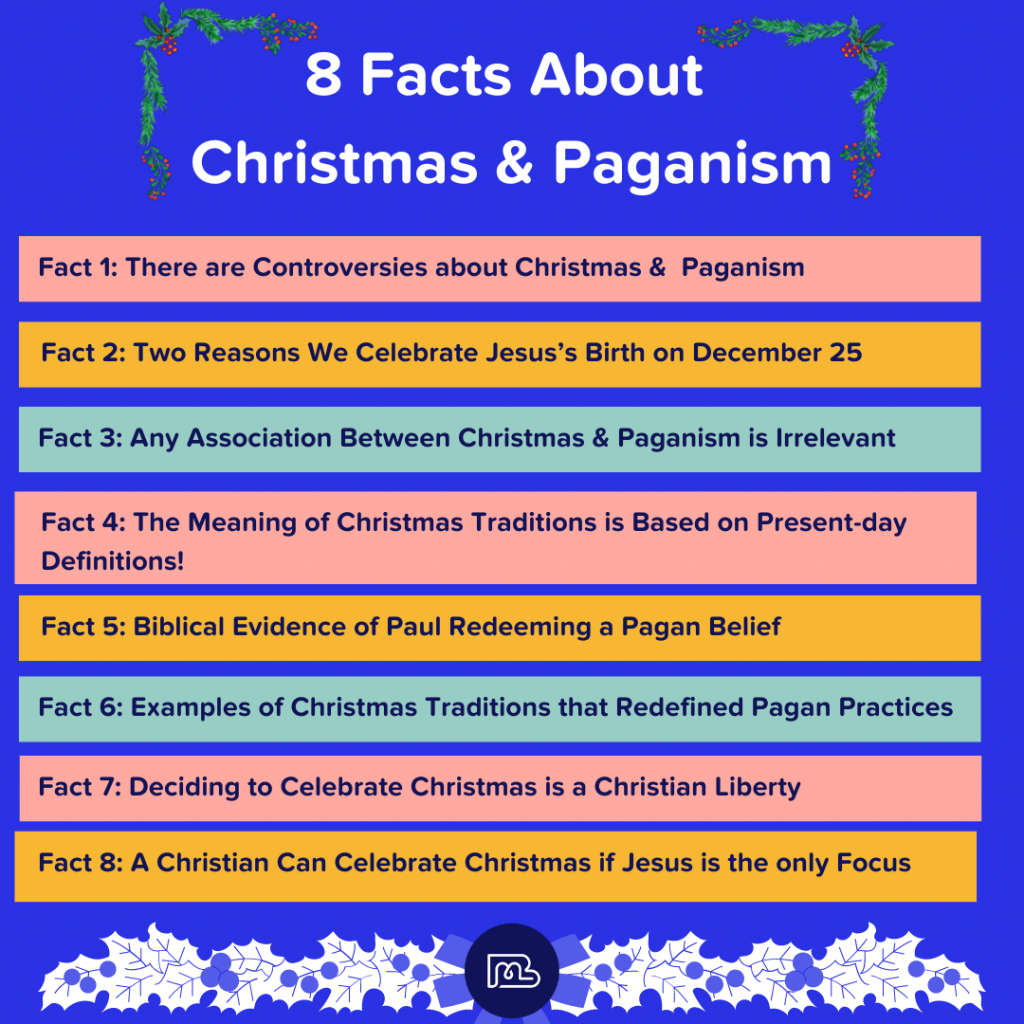 Fact 1: There are Controversies about Christmas and Paganism

As shown above, an association between Christmas and paganism can be upsetting.

Obviously, people argue about pagan influences on Christmas. For example: 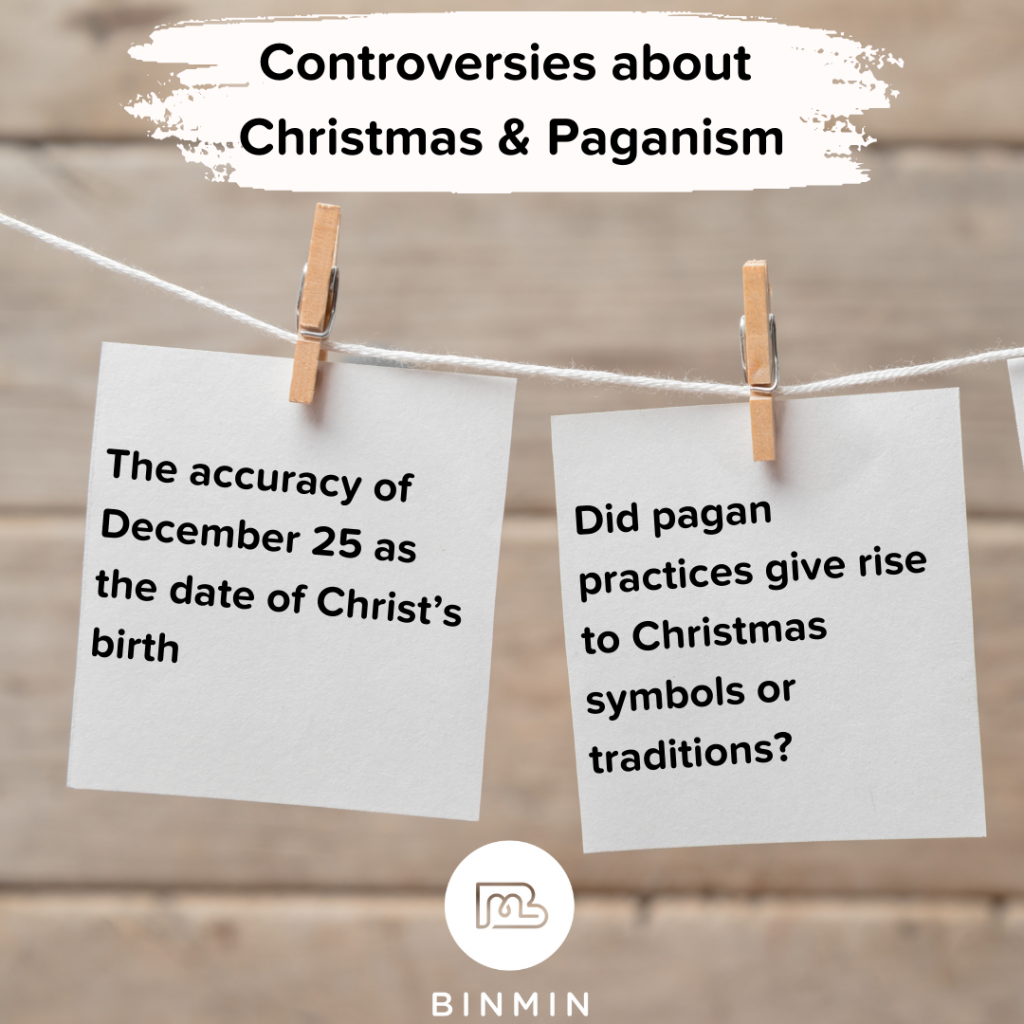 To begin with, we do not know the exact day of Christ’s birth!

Moreover, not all Christians celebrate Christmas on the same date: 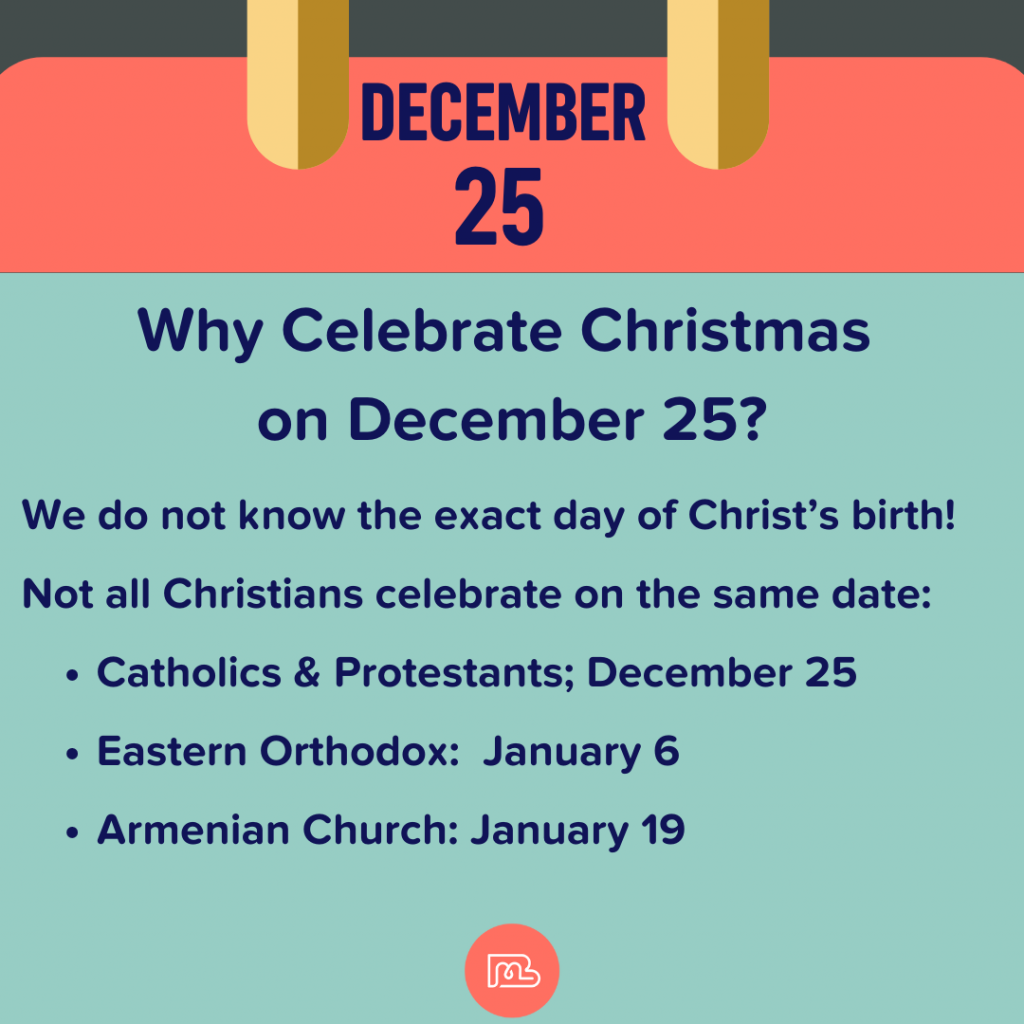 Hippolytus (c. 160-236) was a third-century Roman theologian. He was the first to propose December 25 as Jesus’ birth in his Daniel commentary.

However, the first known recorded celebration of December 25 as a church festival was in 336 AD. The Philocalian Calendar recorded it during the Roman emperor Constantine’s reign.

b.    Relation to the Roman Festivals

Conversely, another explanation is favored by non-Christians. To show a relationship between Christmas and paganism, they claim Christians adopted December 25 from the pagan festivals. 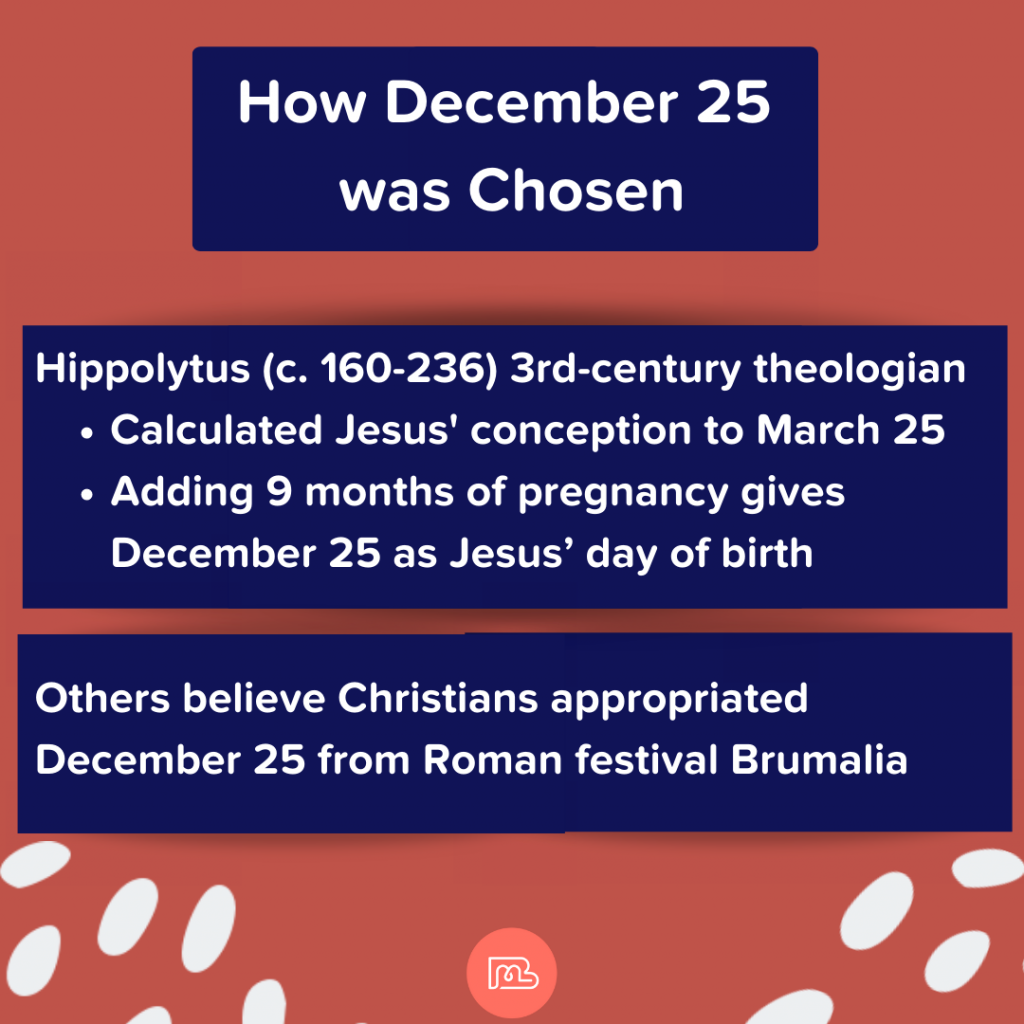 Fact 3: Any Association between Christmas and Paganism is Irrelevant

No one denies that some Christmas traditions are similar to pagan practices. However, there are several factors to consider: 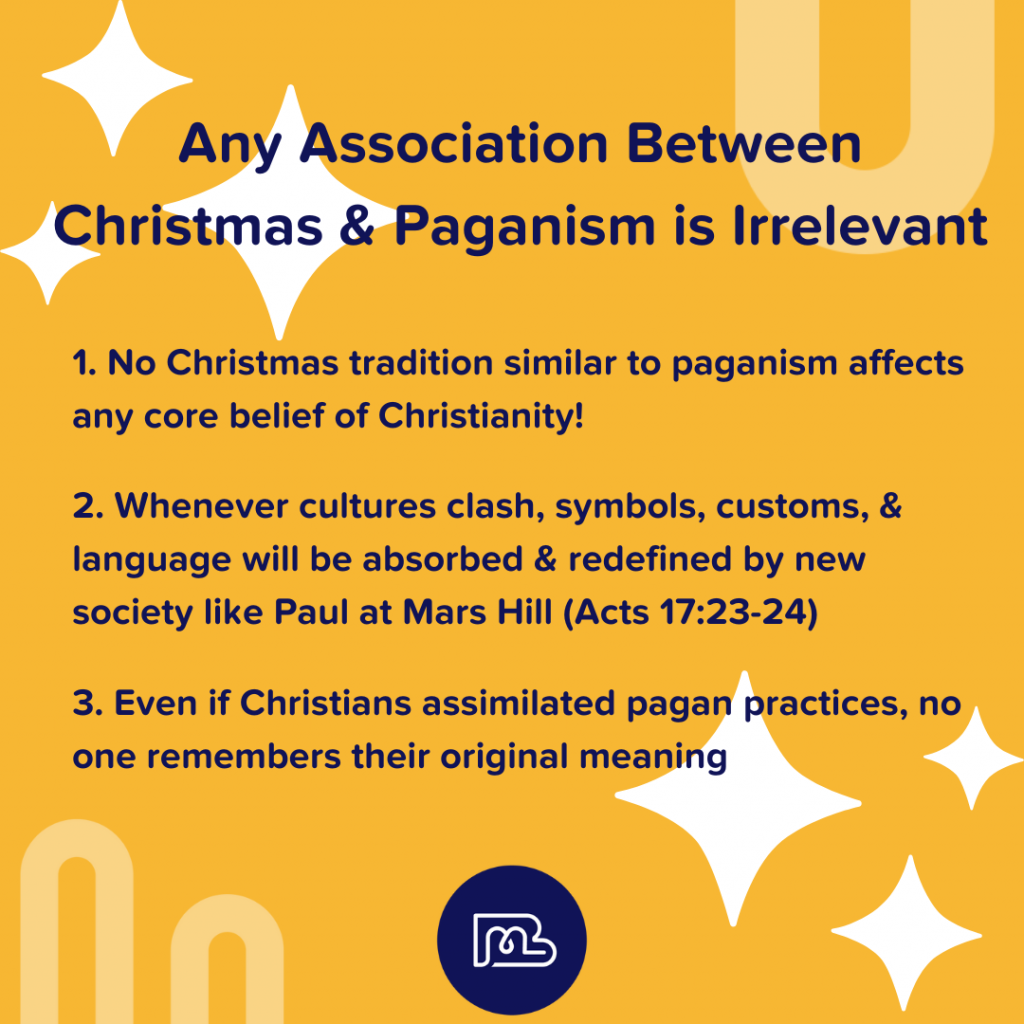 Fact 4: The Meaning of Christmas Traditions is Based on Present-day Definitions!

Accusations of a relationship between Christmas and paganism are unimportant. The irrelevance of this association is based on the following: 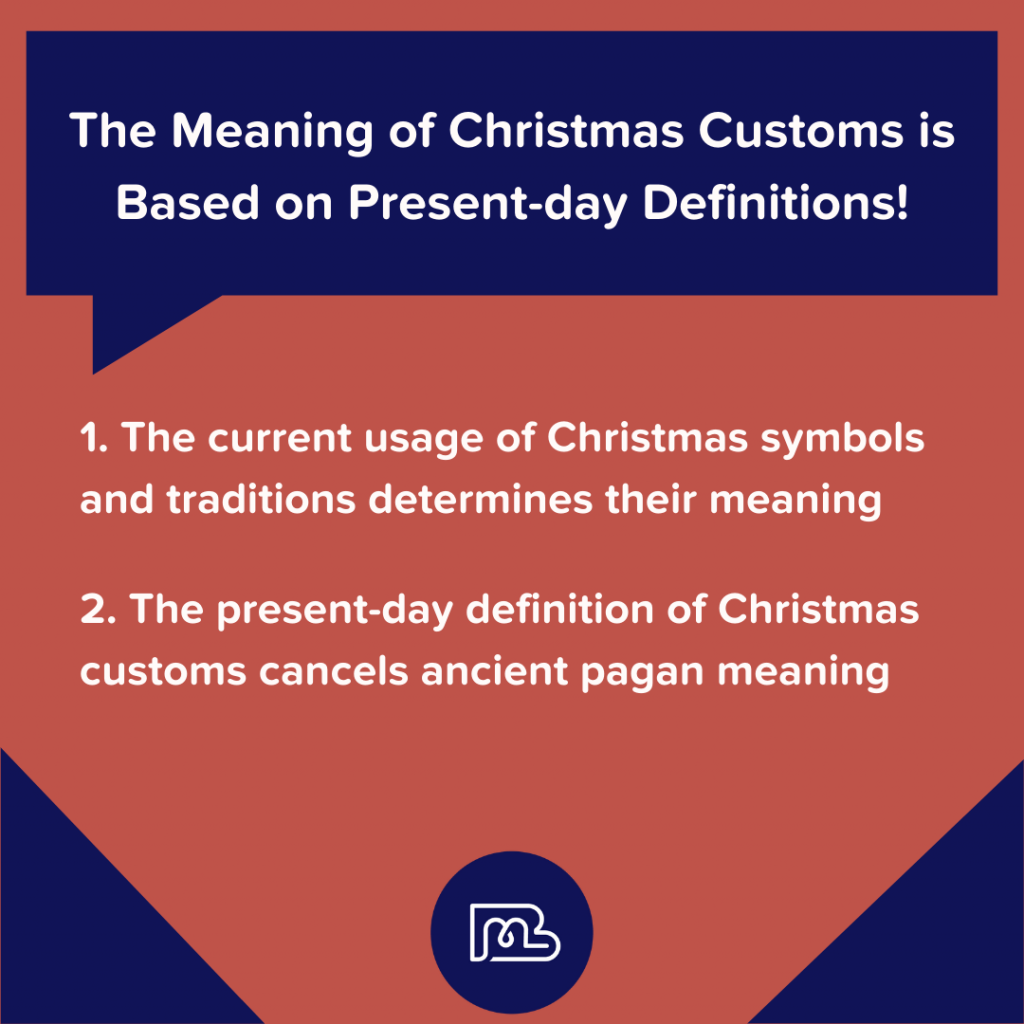 Does this seem confusing? Let me give a few illustrations. Many ancient symbols have been adopted and redefined into contemporary understandings.

For example, I send a specific message when I buy my wife Valentine’s Day card with hearts.

Additionally, many other symbols have evolved from their original meanings. For instance, the: 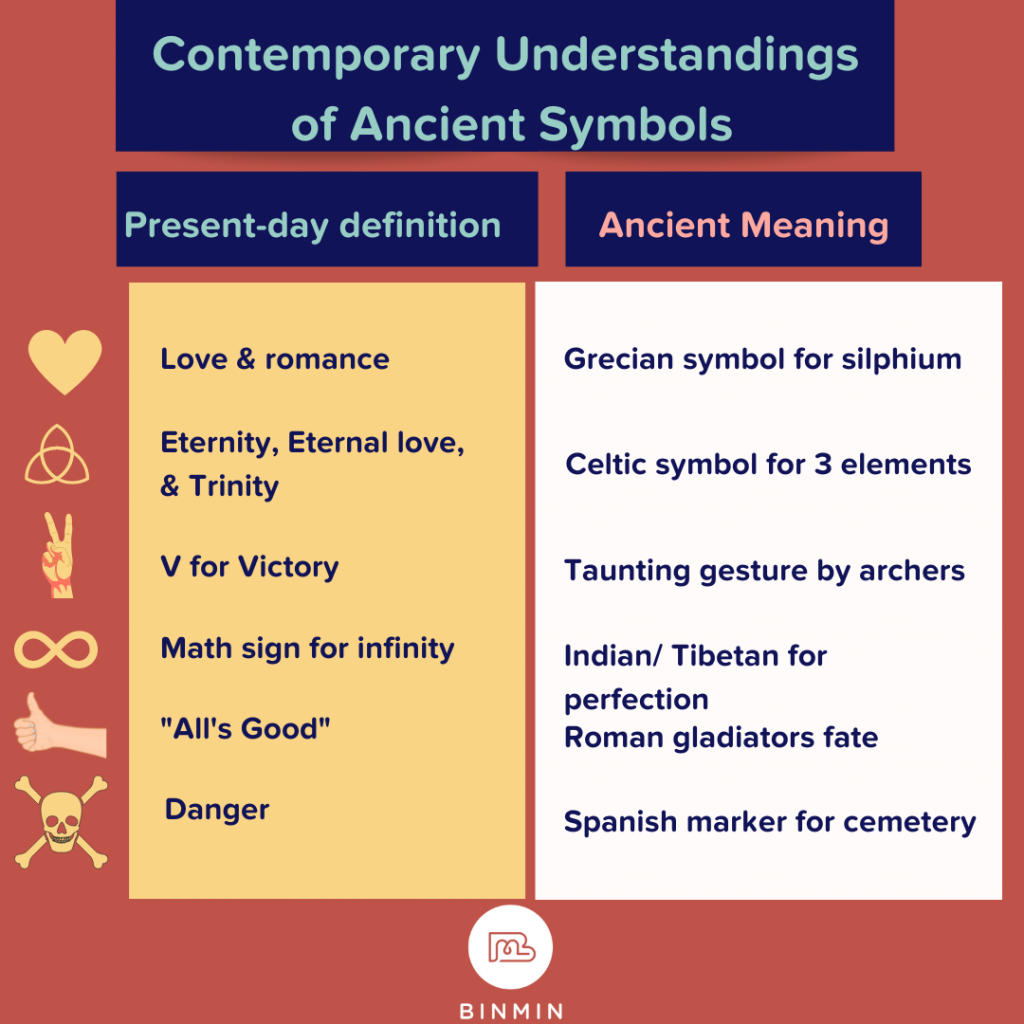 In every case, these symbols are understood by contemporary understanding. Meanwhile, their ancient meanings have been lost.

What about you? Do you think we should not worship on Sunday or Wednesday because:

Paul demonstrates how to redeem pagan symbols into Christianity in Acts 17:22–24.

In effect, Paul confronted a group of philosophers at the Areopagus (Mars Hill). “Men of Athens, I perceive that in every way you are very religious. For as I passed along and observed the objects of your worship, I found also an altar with this inscription: ‘To the unknown god.’ What therefore you worship as unknown, this I proclaim to you.” [emphasis mine]

In light of his statement, Paul culturally redefined the pagan altar to the unknown god. As a result, he introduced Jesus and evangelized the philosophers. 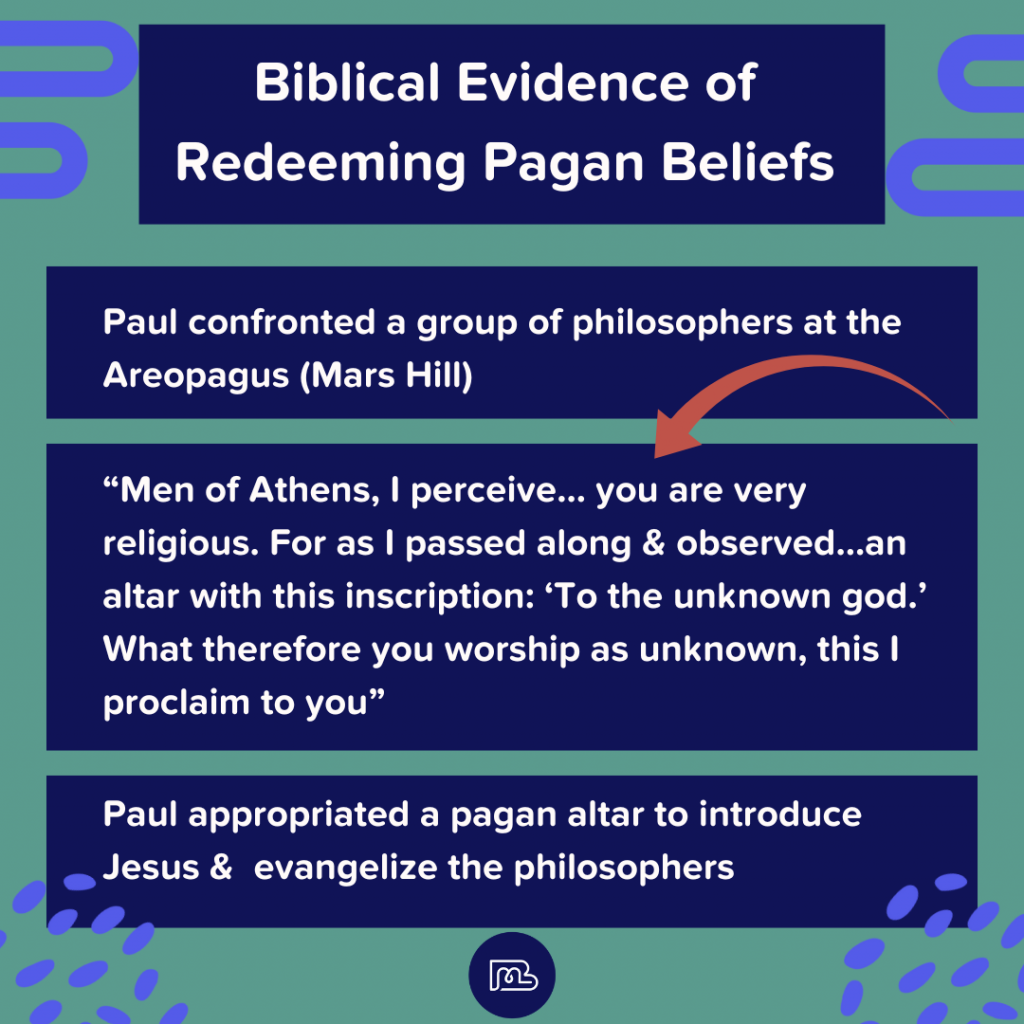 An association between Christmas and paganism cannot discredit the holiday. The reasoning is simple.

Let’s assume that some Christmas traditions did originate from pagan practices. In these cases, early believers absorbed and redefined the pagan traditions into Christian culture. Once they became part of Christian culture, they took on new, meanings.

As a result the pagan customs or symbols were so thoroughly redefined that the original pagan meanings became lost and irrelevant. Therefore, any previous influence or meaning is lost. And in its place is only the present-day definitions of Christmas traditions. In other words, any past pagan practices hold no influence over Christmas traditions. 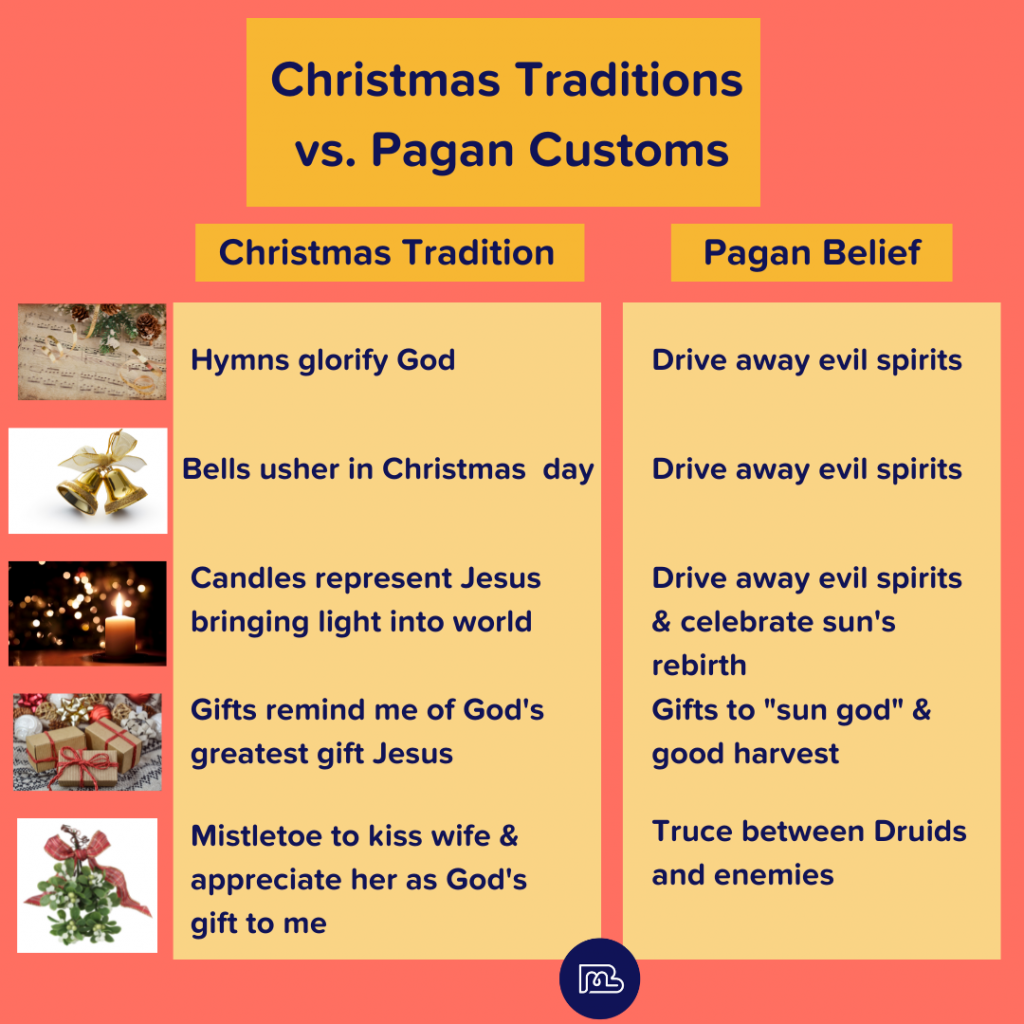 All the above may be accurate, but please take heed. Uncritically practicing Christmas customs is unwise.

It is crucial to examine how we celebrate Christ’s birth. And if any Christmas practices don’t glorify God, discard them! For instance:

Fact 7: Deciding to Celebrate Christmas is a “Christian Liberty”

Choosing whether to celebrate Christmas falls under the category of “Christian liberty”:

Deciding what is best for you and your family will consequently require discernment. And discernment particularly includes: 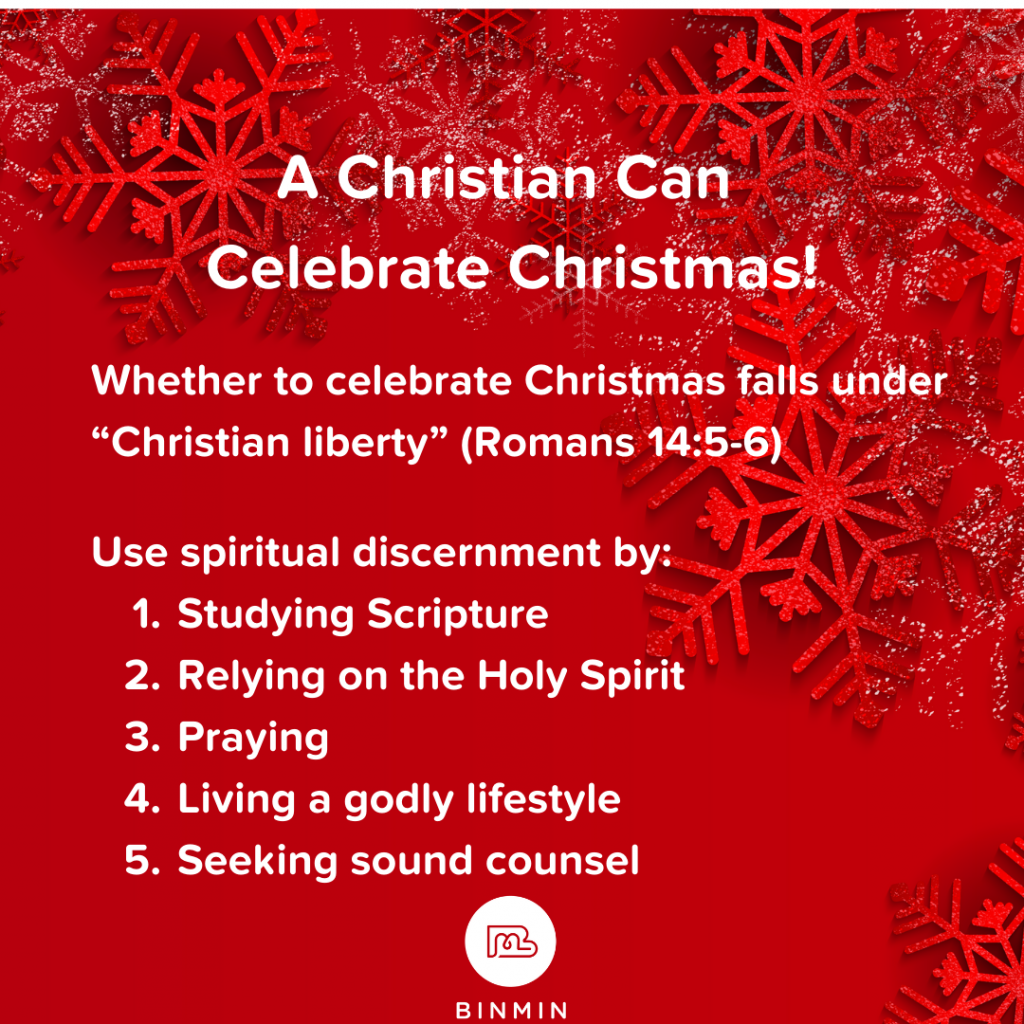 Fact 8: A Christian can Celebrate Christmas if the Focus is Only on Jesus

After reading this article, in addition to practicing discernment, are you still undecided? Are you still struggling with whether to celebrate Christmas? Here are some thoughts to consider. 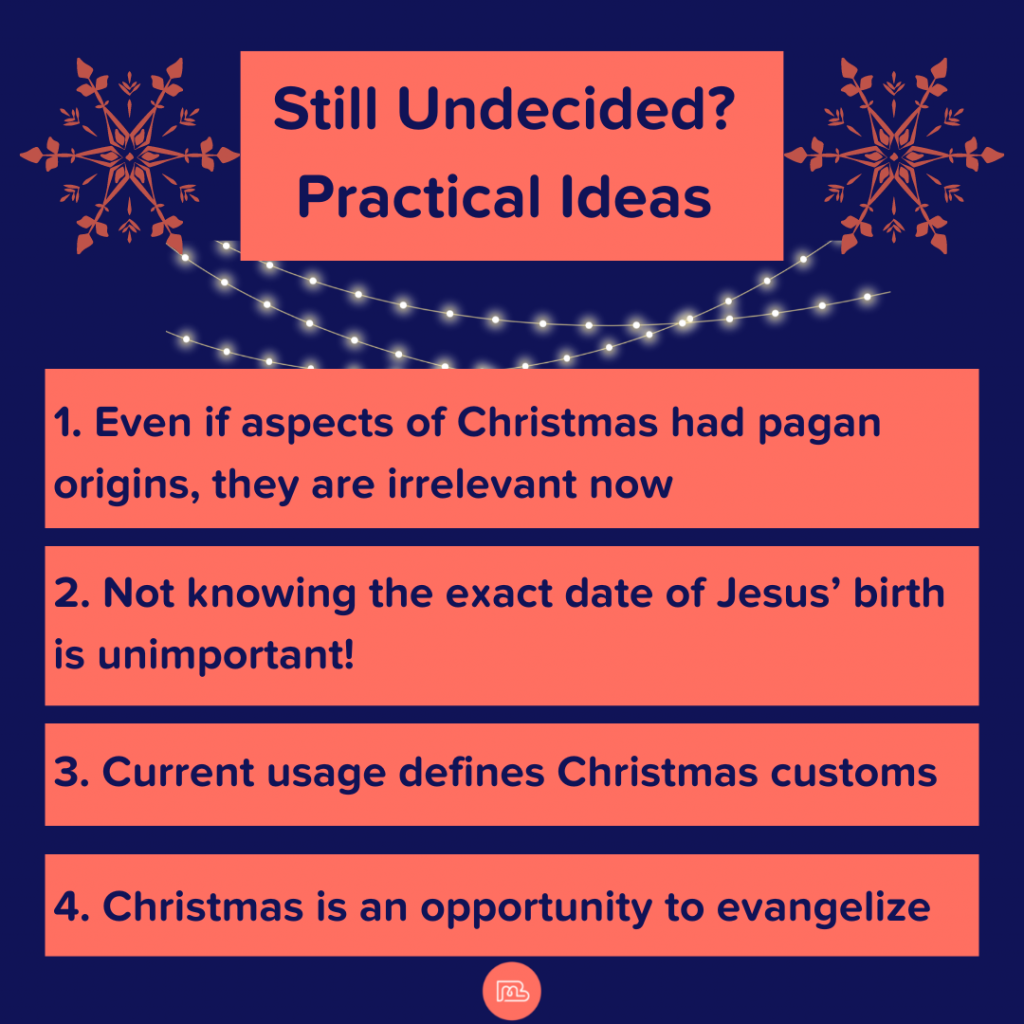 Conversely, if you are convinced that the association between Christmas and paganism causes you too much discomfort, then don’t celebrate the holiday.

But in my opinion, a Christian can celebrate Christmas if the focus in only on Jesus!

In fact, Christmas should be no different than any other time.

Because everything we do in life should focus on and glorify the Lord!

In the final analysis, Paul wrote it best, “So whether you eat or drink or whatever you do, do it all for the glory of God” (1 Cor. 10:31). Basically, Christmas glorifies God by celebrating Jesus’ birth (1 Thessalonians 5:16–18).

Finally, let me end with a word of warning. Don’t allow cultural influences to minimize your Christmas celebration.

If you are a Christian this Christmas season, celebrate by:

If you are not a Christian, this is the perfect time to place your faith in him as your Lord and Savior.

PrevPreviousSix Reasons Why Christmas is a Big Deal!
Next7 Ways to Use Scriptures for Emotional HealingNext