7 Facts for Understanding & Proving the Inspiration of the Bible

By Binmin
Published 2 months ago

Inspiration of the Bible is a unique concept among the world’s holy or wisdom books. But what is it, and why is it so important?

Before I answer those questions, let me ask you a question. “Where do you and your friends go for sound and practical advice about life?”

After all, there are many resources. To illustrate, TED talks, self-help blogs, books, and retreats are plentiful. Not to mention the online or small group support sessions that exist. There is also individual or group psychotherapy available.

In other words, finding answers to life’s challenges is big business. Specifically, a nearly 10-billion-dollar industry! So many people are seeking advice from so many resources.

But have you ever wondered why so many mature Christians are content? Despite challenging situations. For instance, they never seem anxious, angry, or depressed. Furthermore, they are not prideful or jealous. And instead of suffering, they are genuinely kind and forgiving people.

The answer is that they unquestionably put all their trust in Scripture.

You may wonder, “How can they put so much trust in God’s Word?”

Mature Christians trust the Bible because it delivers on its promises.

In other words, it gives you everything you need for life and godliness.

Why can I make that statement so emphatically?

Because the Bible is the inspired Word of God.

Obviously, most people know of Billy Graham and his deep commitment to Christianity. But most people don’t know that he struggled mightily with his faith early in his evangelical career.

Billy’s struggle arose during his friendship with Charles Templeton. Templeton and Graham became friends while serving as evangelists on a Youth for Christ tour in 1946. But by 1948, Templeton shared with Graham that he doubted Scripture’s trustworthiness.

Subsequently, by 1957, Templeton was an avowed agnostic. He consequently wrote “Farewell to God: My Reasons for Rejecting the Christian Faith” in 1996.

But the interaction with Templeton planted seeds of doubt in Graham. However, Billy made a different decision than his friend.

Billy writes, “In August of 1949, I was so filled with doubts about everything that when I stood to preach and made a statement, I would say to myself: I wonder if that is the truth. I wonder if I can really say that sincerely. My ministry had gone. “I then took the Bible up into the high Sierra Nevada mountains in California. I opened it and got on my knees. I pled, ‘Father, I cannot understand many things in this Book. I cannot come intellectually all the way, but I accept it by faith to be authoritative, the inspired Word of the living God!”

After that confession, he placed his faith in the inspiration of Scripture. From then on, Graham’s ministry charged ahead. As a result, he never doubted the trustworthiness of the Bible again.

Why did Graham’s trust in the inspiration of the Bible leave him without a doubt?

I. A Definition of Inspiration

“Inspiration of Scripture” may be a new term or concept for you. However, for Christians who love the Bible, it is a foundational belief. It ensures that God has spoken through the more than 40 authors who wrote it.

If the idea of Biblical inspiration is confusing at this point, you are not alone. I will unpack the correct meaning. And I will also show why inspiration makes Scripture the only reliable source of God’s word.

1. In the first place, what we don’t mean by inspiration of the Bible.

To illustrate the distinction, inspiration normally means a sense of exhilaration or motivation. In contrast, Biblical inspiration is different.

2. In the second place, what we do mean by divine inspiration

Basically, understanding the inspiration of the Bible begins with two critical texts. Specifically, the texts are 2 Peter 1:20-21 and 2 Timothy 3:16.

In 2 Peter 1:20–21. Peter writes, “knowing this first of all that no prophecy of Scripture comes from someone’s own interpretation. For no prophecy was ever produced by the will of man, but men spoke from God as they were carried along by the Holy Spirit” (emphasis added).

In this case, Peter is saying that: 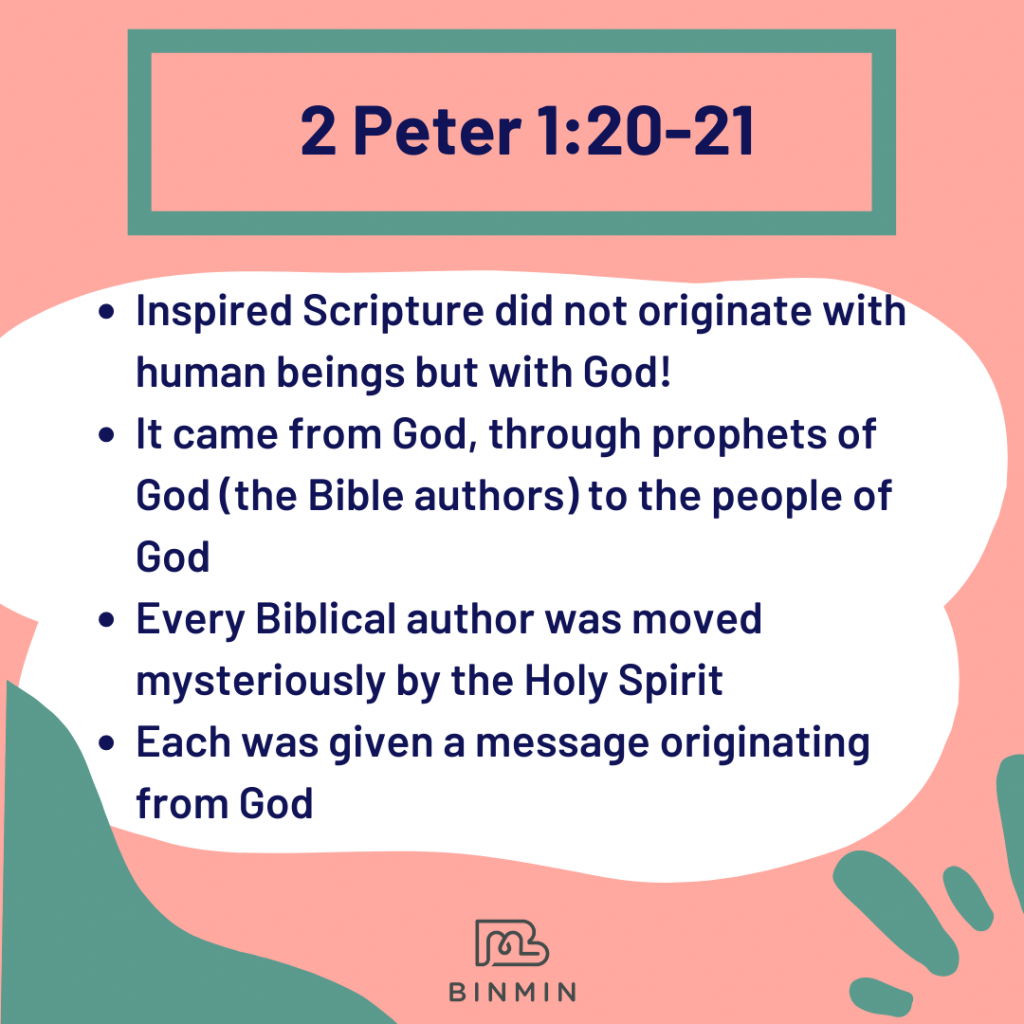 Moreover, in 2 Timothy 3:16, Paul writes, “All Scripture is breathed out by God and profitable for teaching, for reproof, for correction, and for training in righteousness” (emphasis added).

In the same vein as Peter, Paul is making several claims: 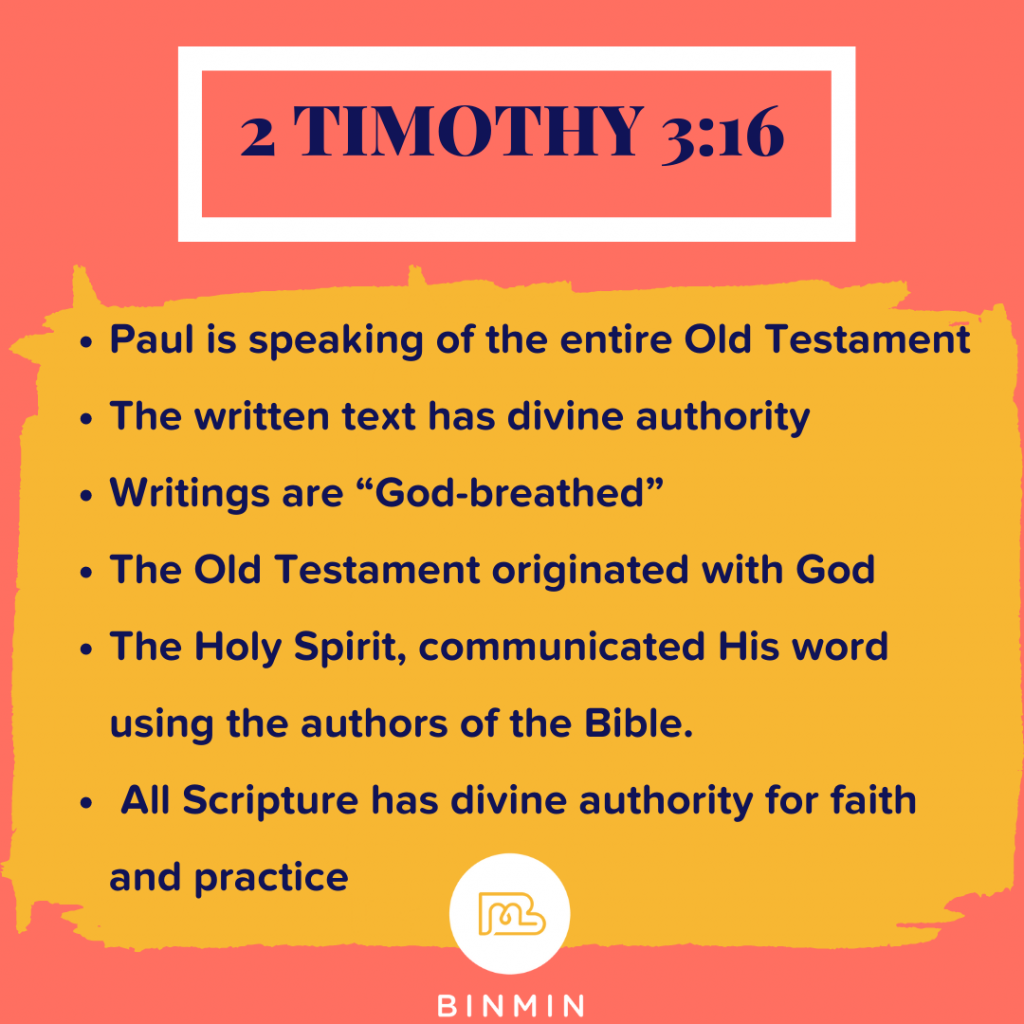 It is important to realize, the wrong English term for being “God-breathed” is used. Specifically, “inspiration” is the English word for “breathing in.” Instead, the correct term should be expiration. Expiration means “breathing out” or what is implied in God-breathed. 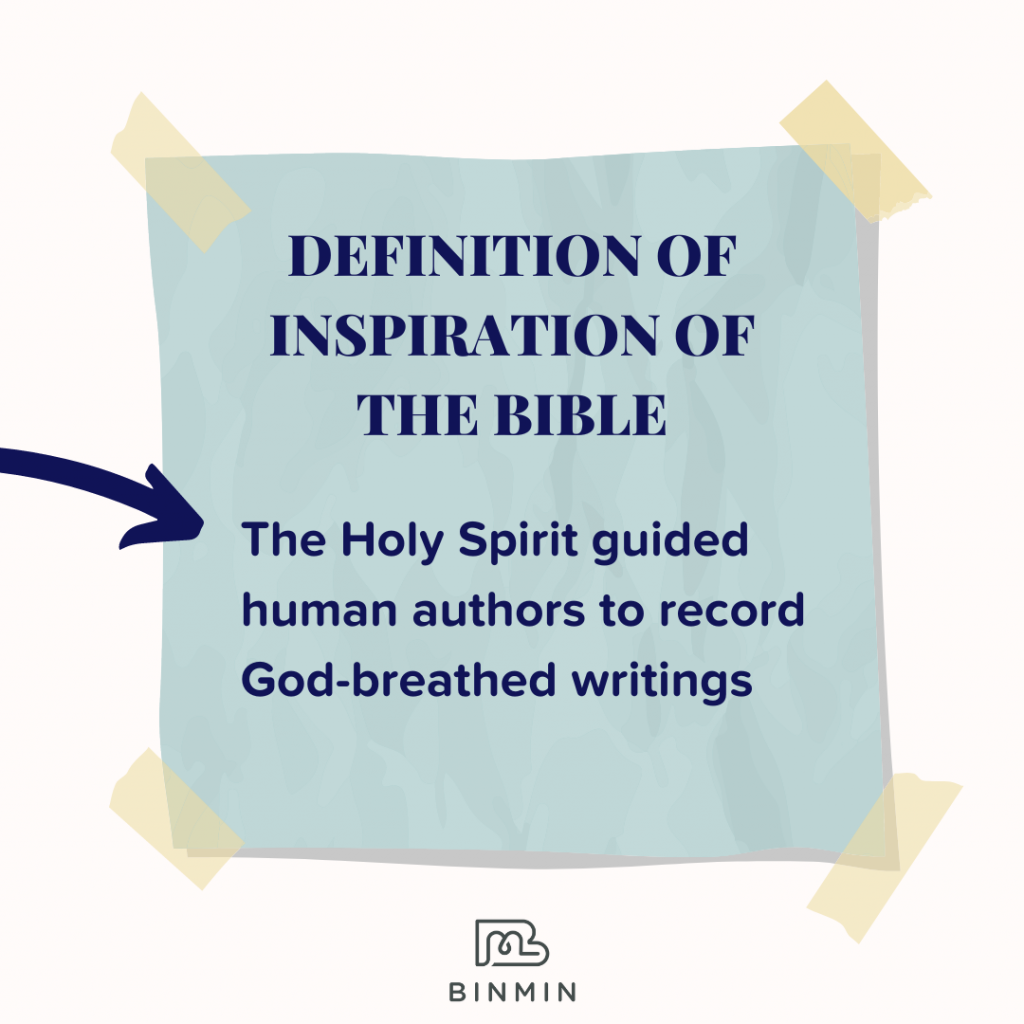 II. The Old Testament is Inspired

Undoubtedly the Old Testament claims it is God’s inspired word many times in many places.

Firstly, the Old Testament authors used specific phrases hundreds of times. These terms indicated that God inspired them. These expressions include:

Secondly, God told Moses, “I will raise up for them a prophet like you from among their brothers. And I will put my words in his mouth, and he shall speak to them all that I command him” (Deut. 18:18).

Thirdly, David defines God’s inspiration in 2 Samuel 23:2. He said, “The Spirit of the Lord speaks by me; his word is on my tongue” (emphasis added).

Fourthly, the prophet Isaiah wrote, “My Spirit that is upon you, and my words that I have put in your mouth” (Isa. 59:21, emphasis added)

Sixthly, Jesus confirms the inspiration of the Old Testament. 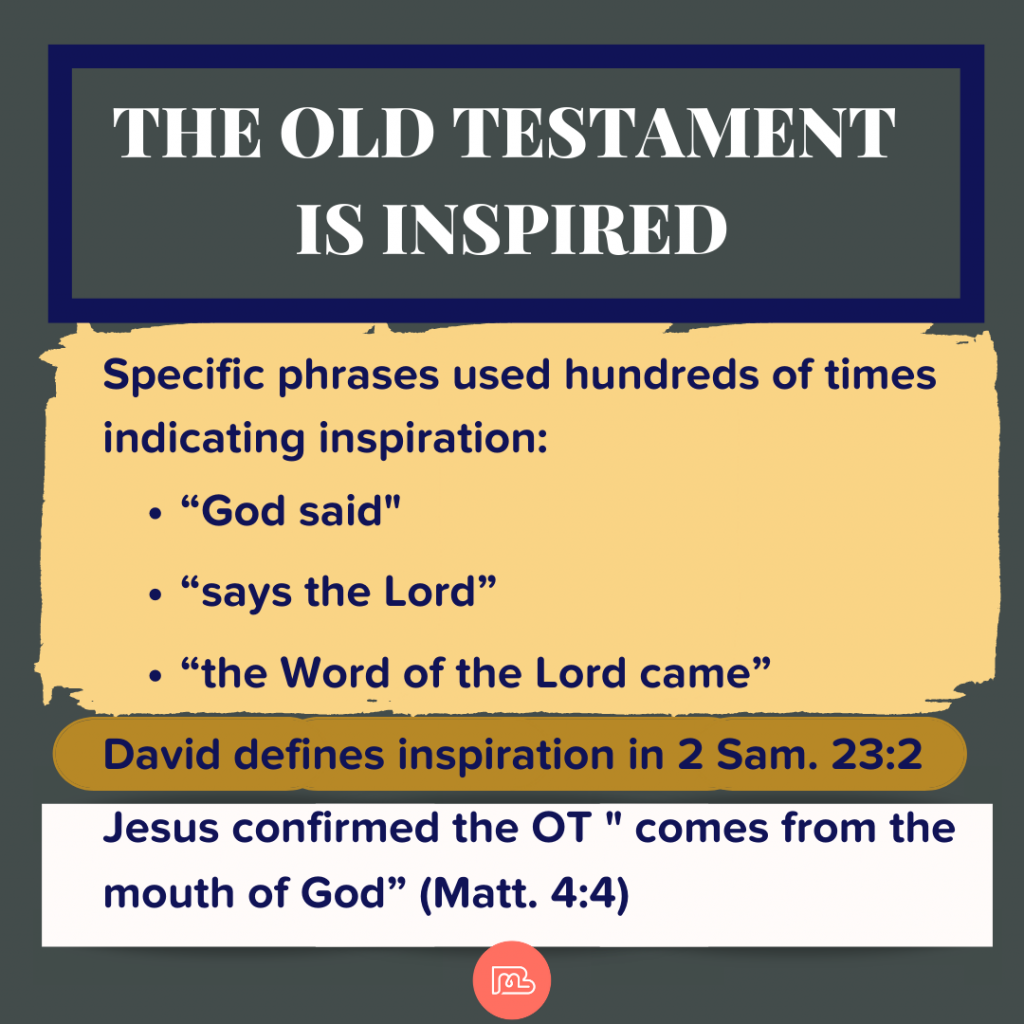 III. The New Testament is Inspired

Several lines of Scriptural evidence prove that the New Testament is inspired.

Secondly, the Apostles refer to each other’s writings as Scripture. For example: 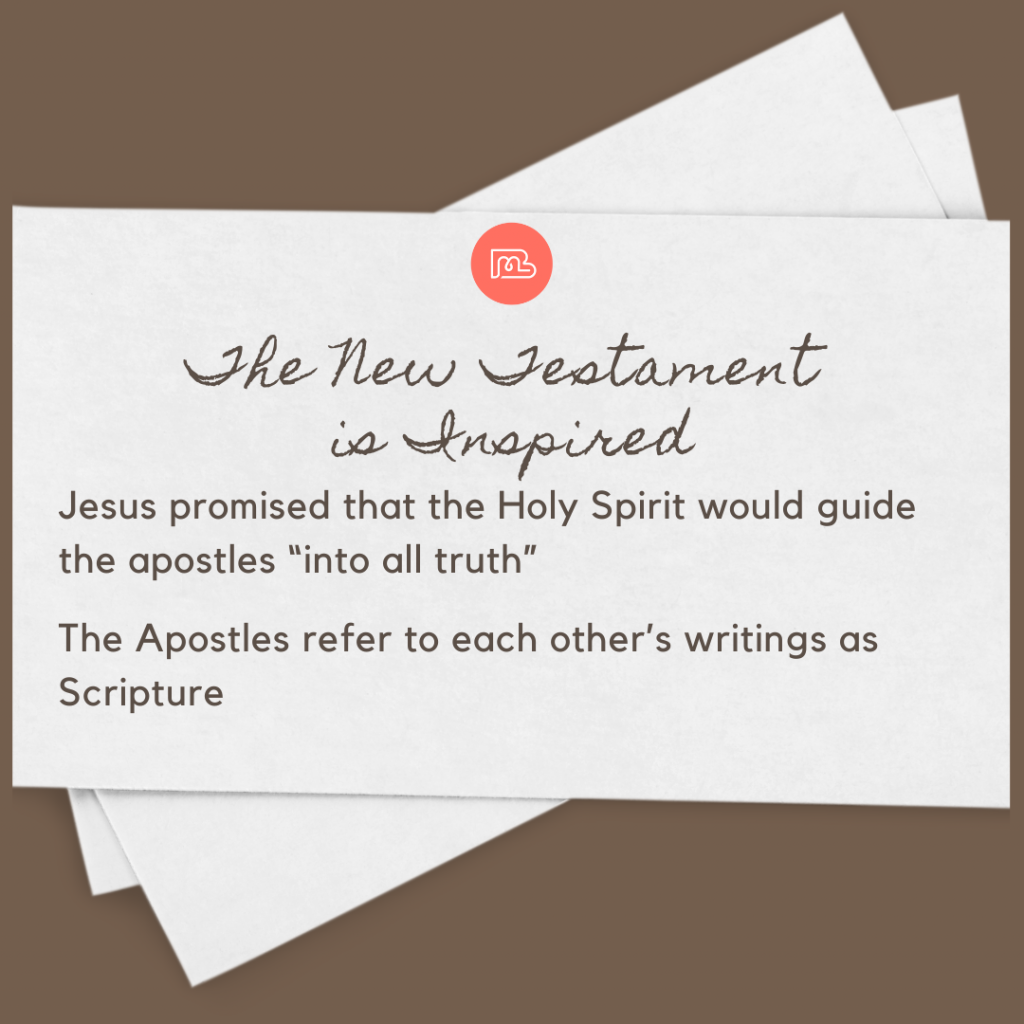 IV. Inspiration of the Bible is a Mystery

You might wonder, “How does the inspiration of the Bible occur?”

That is an excellent question. But the inspiration of the Bible is largely a mystery.

But what we do know is that:

Therefore, each biblical book has two authors, one is God, and the second is human. But it is essential to remember that even though humans were involved God:

Considering the above we refer to “verbal plenary inspiration” of the Bible. 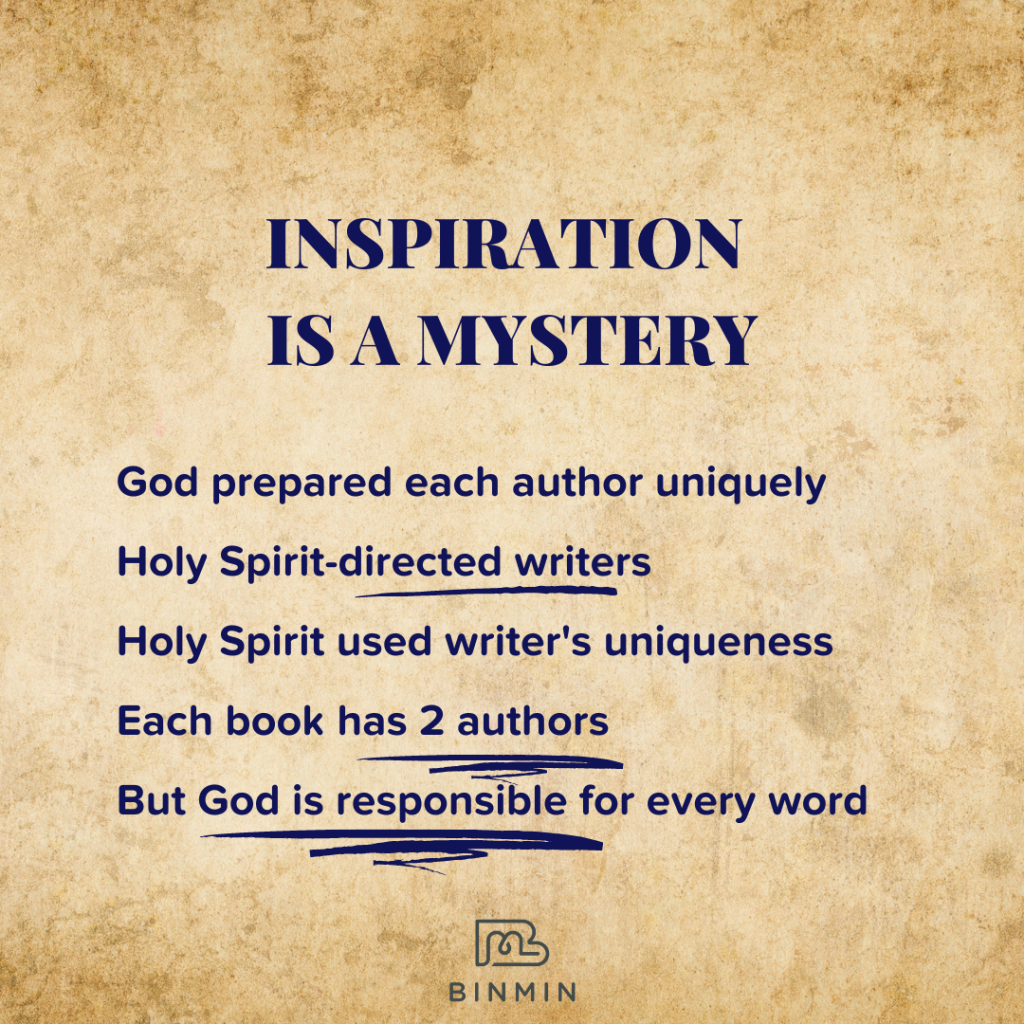 V. The Implications for the Inspiration of the Bible

Since God inspired the Bible, it will have divine characteristics. And being God-breathed, there are implications. And these implications set Scripture apart from all other human-made “holy” books. 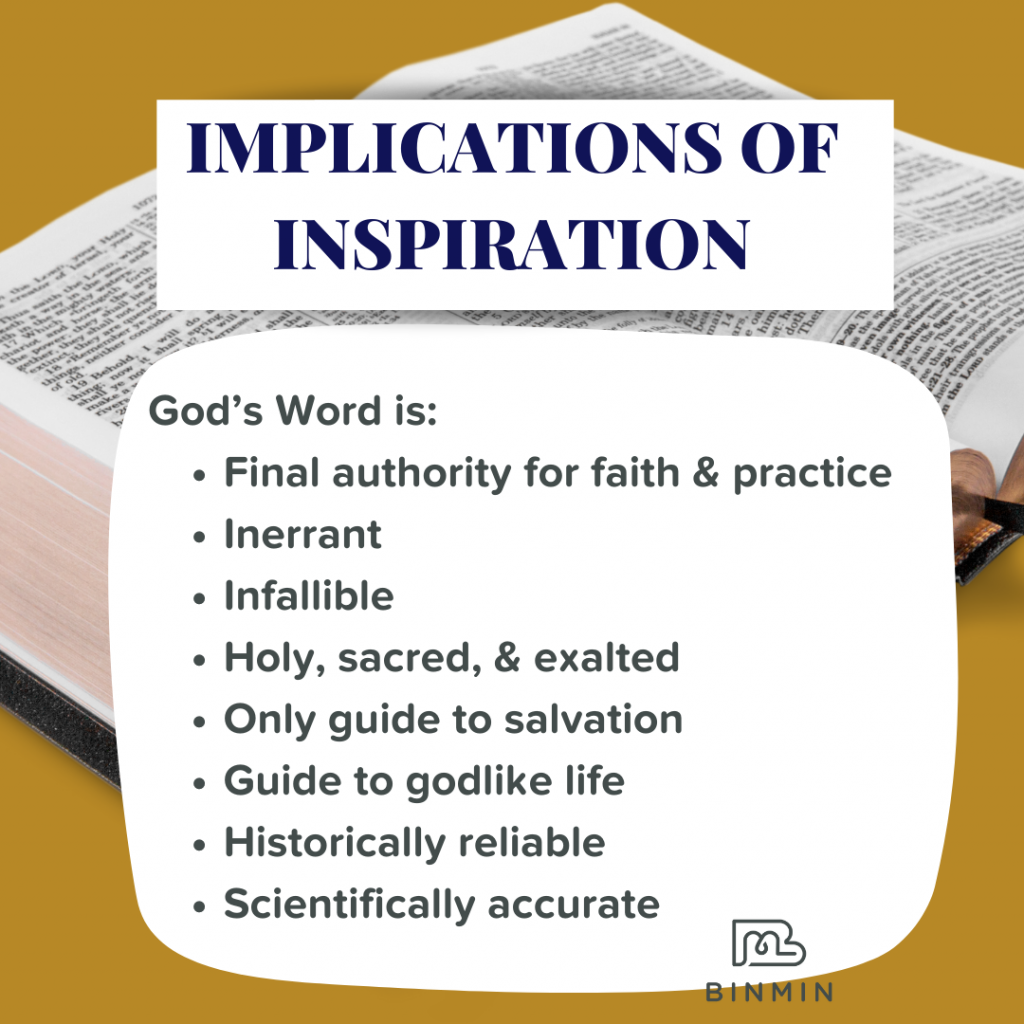 And fortunately, we know with near-perfect accuracy the content of the original texts. Therefore, we can trust that the Bible is the ultimate authority in essential areas of our lives. These include all matters of salvation, faith, and living our lives as Christians (Luke 16:31; 2 Tim. 3:16–17; 2 Pet 1:3, 20-21).

VI. Proof that the Bible is Inspired

We can prove the inspiration of the Bible through: 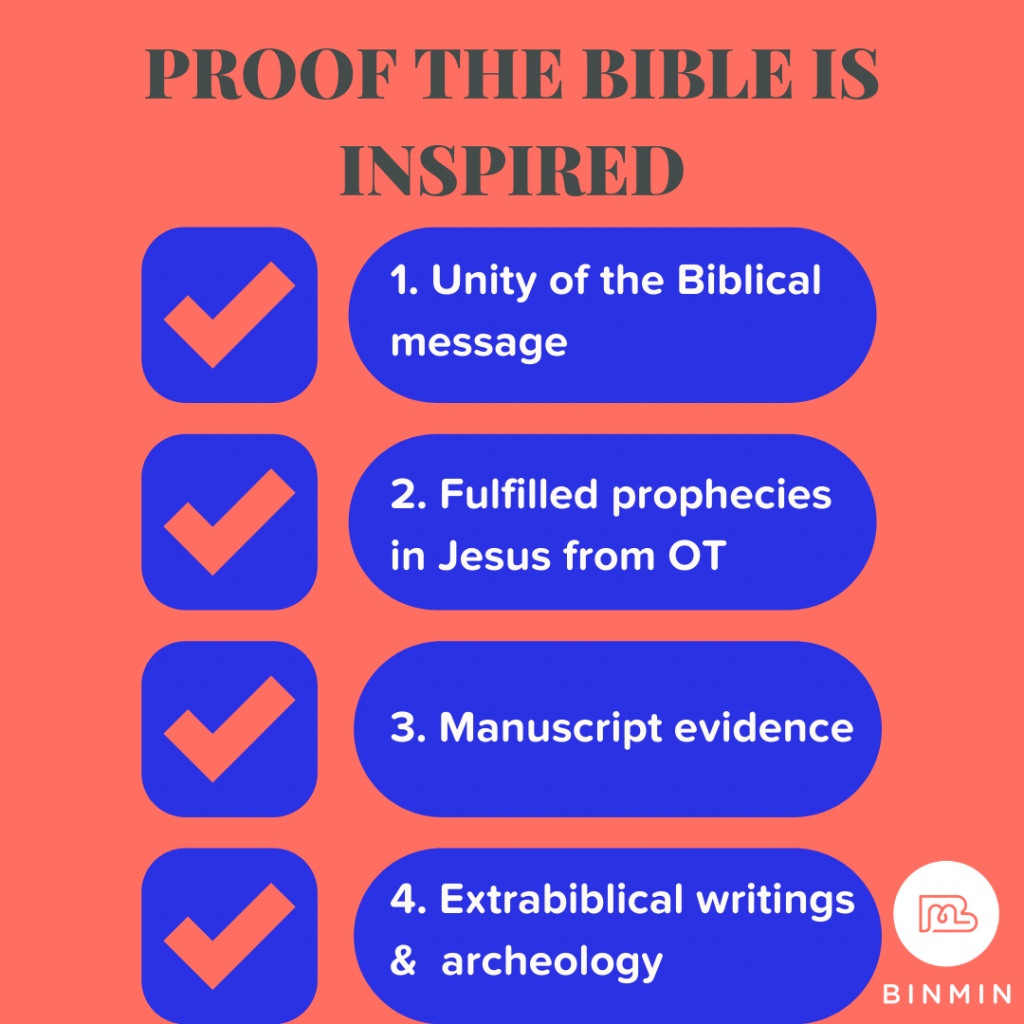 1. Unity of the Bible proves inspiration.

One supporting line of evidence for the Bible’s divine origin is the unity of its message. This unity exists despite the diversity of time, authors, places, languages, and genres.

The Bible’s unity is seen in the singular unfolding drama. This problem is humankind’s sin. And the only solution is salvation through Christ (Mark 10:45; Luke 19:10)

The possibility of Jesus fulfilling more than 191 Old Testament prophecies is impossible. And it proves their divine origin.

a.   Original books were written soon after the events

Specifically, all New Testament books were written soon (20-60 years) after Jesus’ resurrection. They are all first-century documents. This means:

b.   Available copies are early

New Testament manuscript copies date to soon after the originals. Regarding the manuscripts, there are:

The New Testament has been transmitted with 99.5% accuracy (better than any ancient text). The 0.5%:

5. Extrabiblical writings and archeology prove the inspiration of the Bible

a.   Extrabiblical writings from secular and Jewish sources confirm the New Testament

There are at least seventeen non-Christian writings within 20-150 years after the resurrection. They record more than fifty details about Jesus. Including his life, teachings, death, and resurrection. They also provide details concerning the earliest church.

The writers of these sources were not friends of Christianity. They included:

Archeology has confirmed more than 140 eyewitness details and 30-plus references. These come from just the four Gospels and Acts. This evidence establishes the historicity of the New Testament beyond a reasonable doubt.

VII. Inspiration of the Bible is the “Foundation of all Foundational Christian Beliefs.

You could reasonably ask, “Do I have to believe in the inspiration of the Bible to be saved?

The honest answer is “No.” You can be saved without believing in the inspiration of Scripture.

But consider this argument:

What’s your next step?

If God inspired the Bible, that means it is the Word of God. This reality means you have a decision.

Becoming a Christian allows you to read, study, and memorize the Bible to become closer to God. If you are not a Christian, you will not have the Holy Spirit living inside you. But if you do, God will illuminate Scripture in ways you cannot imagine.

This article is the last in the series on the essential doctrines of the Christian faith.

Why not review the previous articles, podcasts, and videos, including:

These will help you grasp the fundamental doctrines shared by all Christians.

—. and William Nix. A General Introduction to the Bible (Chicago: Moody Press, 1986)

—, and Ron Rhodes. Conviction without Compromise. Eugene OR: Harvest House, 2008.

Habermas, Gary. “Why I Believe the New Testament Is Historically Reliable.” In Norman Geisler and Paul Hoffman, eds. Why I Am a Christian. Grand Rapids: Baker, 2001.

Edwin Yamauchi, “Jesus outside the New Testament: What Is the Evidence?” In Jesus under Fire. Edited by Michael Wilkins and J. P. Moreland, Grand Rapids: Zondervan, 1995.

PrevPreviousWhat is the Tribulation? 16 Facts You Must Know!
NextRenewing Your Mind to Defeat Emotional ProblemsNext