There is so much misinformation about God and Christianity; many seekers are surprised to learn that there are simple answers to their questions. In this article, I want to go over a few of the most common questions about God that, in reality, have clear and understandable answers. Especially if you are a student of Scripture.

1. “Isn’t the Trinity a Contradiction?”

One of the most asked questions about God involves the Trinity. The Trinity is Christianity’s unique view of God and is a view held in stark contrast to other worldviews, such as Islam or atheism.

The Trinity is a “mystery”—a Scriptural belief that we cannot fully comprehend. Because mysteries about God are beyond our ability to understand, they are often called “contradictions” by non-Christians. They are wrong:

What we do know about the Trinity is that it is: 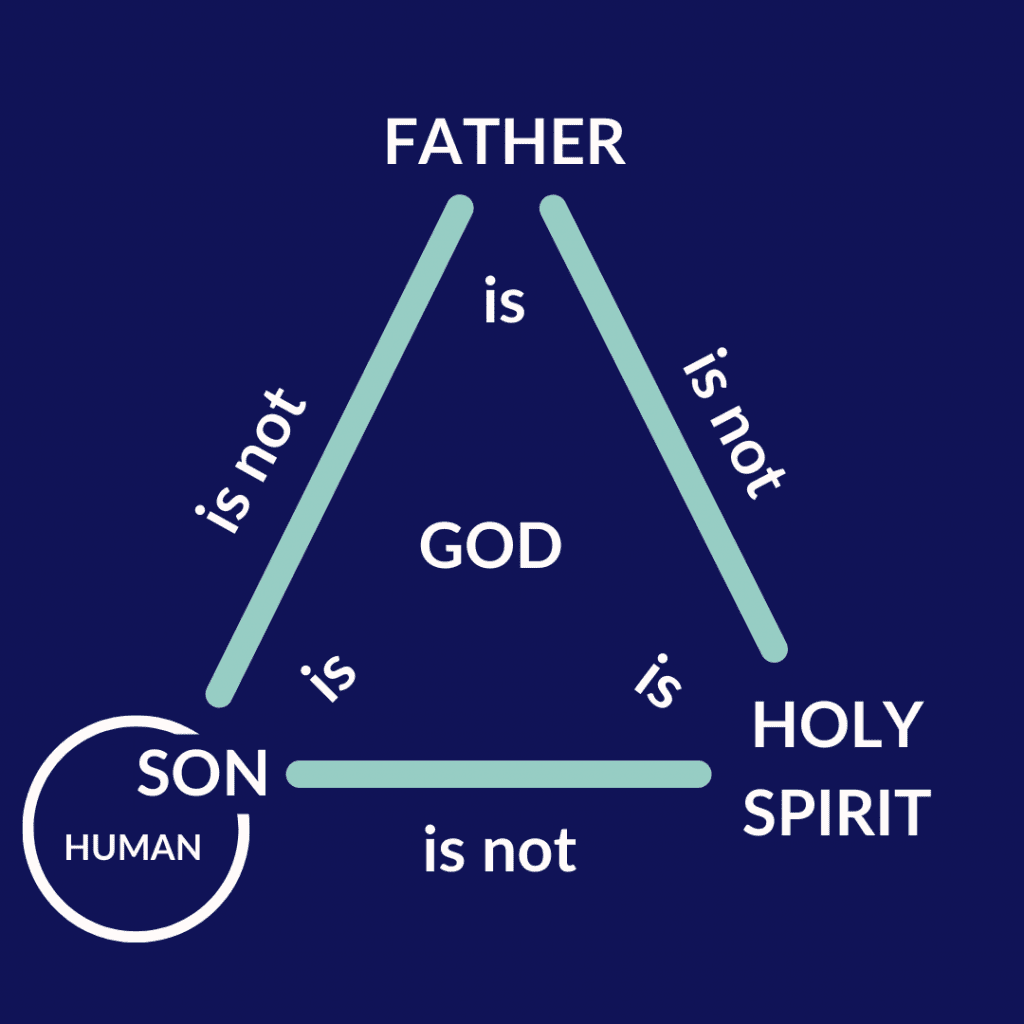 To help explain the Trinity, we can use analogies. In this case, a triangle. 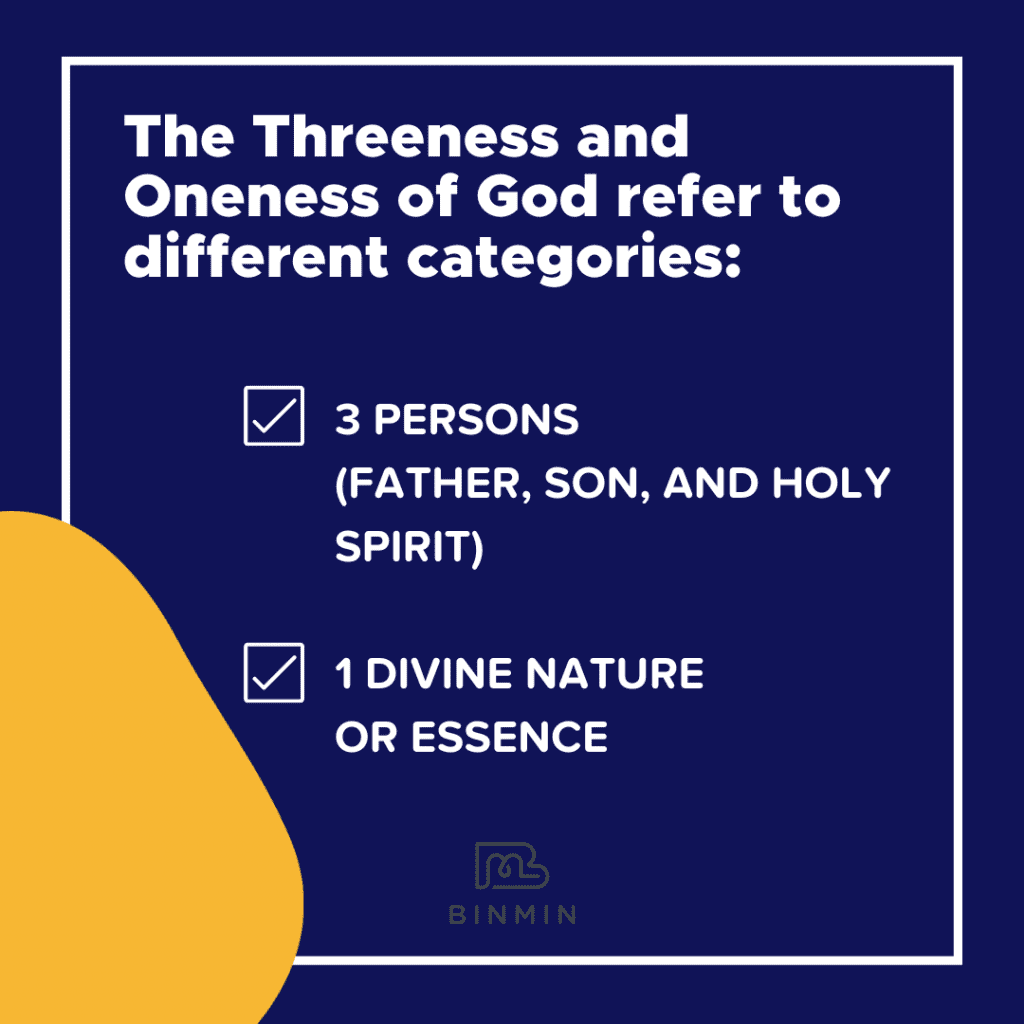 The Trinity is not a contradiction!

If you’re still struggling to understand the Trinity, you’re in good company. Because the Trinity is a mystery, no analogy will perfectly explain it. Don’t let this frustrate you. Instead, let it spur you to a greater love for this God who is beyond the full comprehension of our finite, human minds.

2. “How Can Jesus Be Fully God and Fully Human?”

Another of the most common questions about God has to do with Jesus. How can he be both fully God and fully human?

Let’s return to the triangle diagram representing the Trinity. In the corner representing Jesus, we add a circle. The circle touches but doesn’t overlap the corner.

3. “If Jesus is God, How Can ‘God’ Grow in Knowledge, Become Tired and Thirsty, or be Tempted by Sin?”

Evidence of Jesus’ humanity is clear in Scripture. We see that Jesus grew in knowledge (Luke 2:52), became tired and thirsty (John 4:6-7), and was tempted by sin (Heb. 4:15). On the surface level, those realities don’t seem to make sense.

To answer this question about Jesus, we need to back up to the explanation of his nature—he is “one person with two natures:” 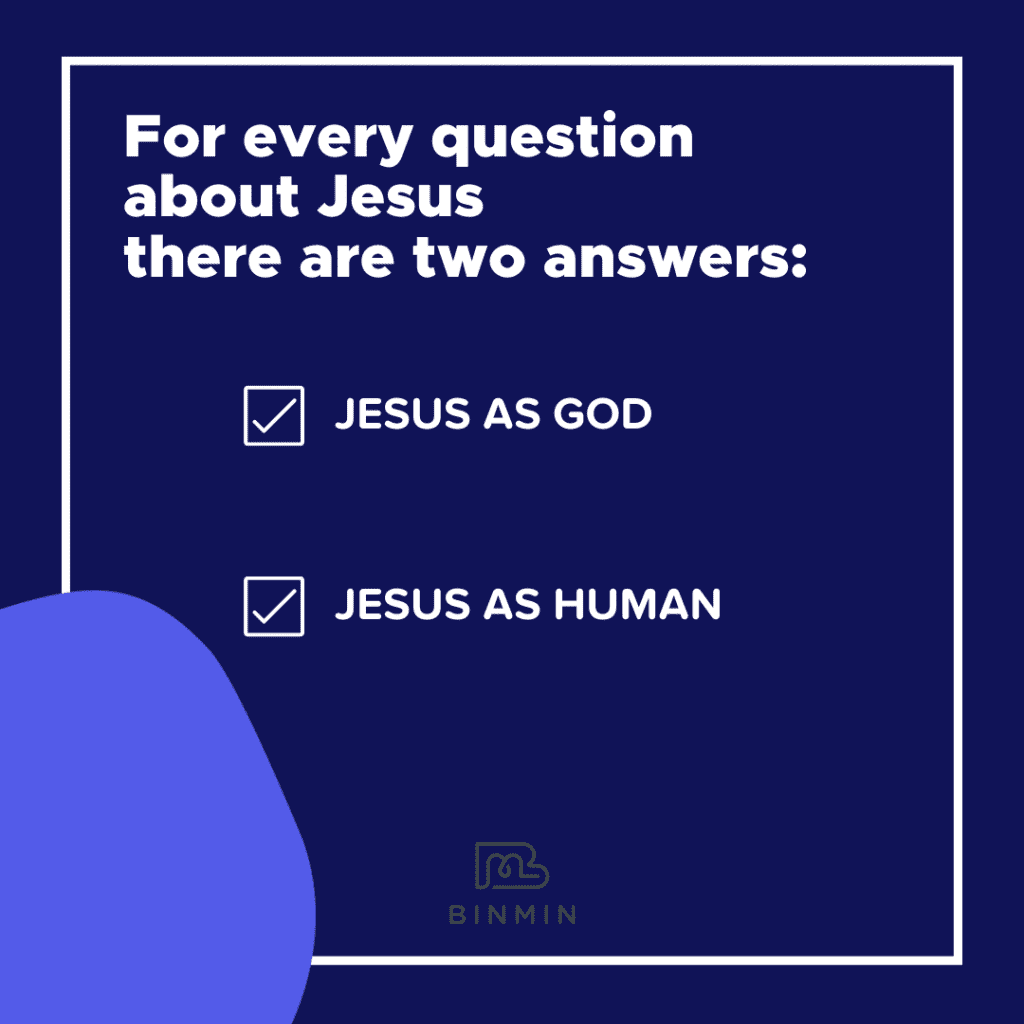 Example 1: “Did Jesus ever get hungry, tired, or thirsty?”

So, there is no contradiction!

The question about God’s origin is one of the most frequently asked questions about God. And it makes a lot of sense. After all, everyone and everything we know on this earth has had a beginning. Thus, this question is based on that knowledge.

It presumes that something or someone existed before God—and that they or it created him. But that is impossible! Why? Because God is eternal.

So, the answer itself is surprisingly brief, “No one created God. God is eternal and self-existent.”

Just like the question about the Trinity and Jesus’ two natures, this question about God is unlike anything else we know. That makes it hard, but not impossible, to understand.

To help wrap our minds around it, let’s unpack this answer. Scripture says that God is eternal, everlasting without beginning (Gen. 21:33; Ps. 90:2). Being eternal means no person or thing created him. That means:

5. Isn’t Being “Self-Existent” a Contradiction?

As I just showed, God is eternal. And because he is eternal, he is:

Now, critics often attempt to trip us up by confusing self-existing with self-caused.

Although both words start with “self,” they have very different meanings!

God cannot be self-caused. Being “self-caused” is a logical contradiction. Why?

6. “How Can God Answer Everyone’s Prayers?”

During trials, many of us ask, “Does God hear our prayers?” But there is no need to worry. Why?

Because God is eternal, he transcends (is above and beyond) his created universe, including time (Isa. 57:15).

But God’s infinity puts a stop to these wrong-headed notions. “Infinite” means unlimited without boundaries or restrictions. 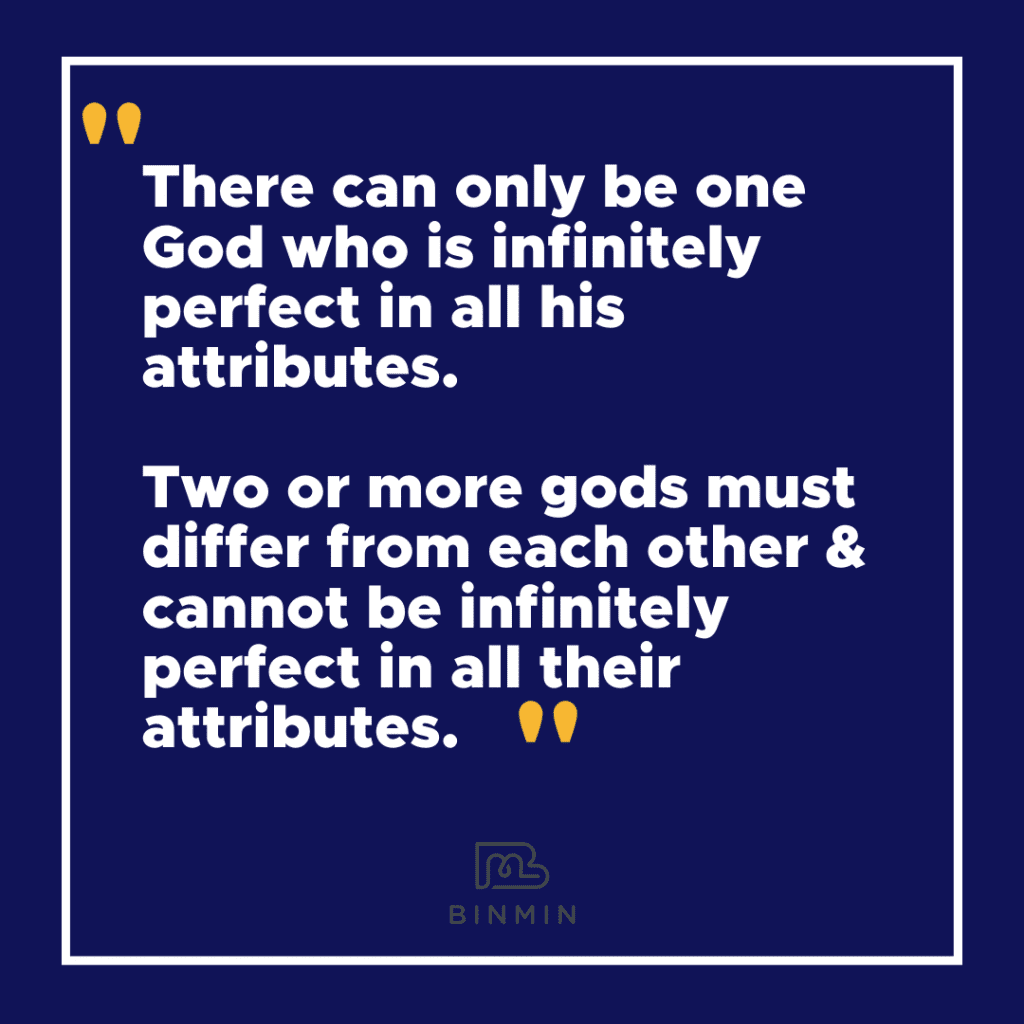 Let’s look at this reasoning from a human perspective. Compare two or more humans. They have different attributes. One is more intelligent, taller, thinner, etc. In other words, one has what the other lacks.

Now consider the Christian God. He lacks nothing! All his attributes are both quantitatively and qualitatively infinite. But if two or more “gods” existed, they would have to differ:

8. I Say “Love” is God’s Greatest Attribute, My Friend Says it’s His “Holiness.” Which of us Is Right? 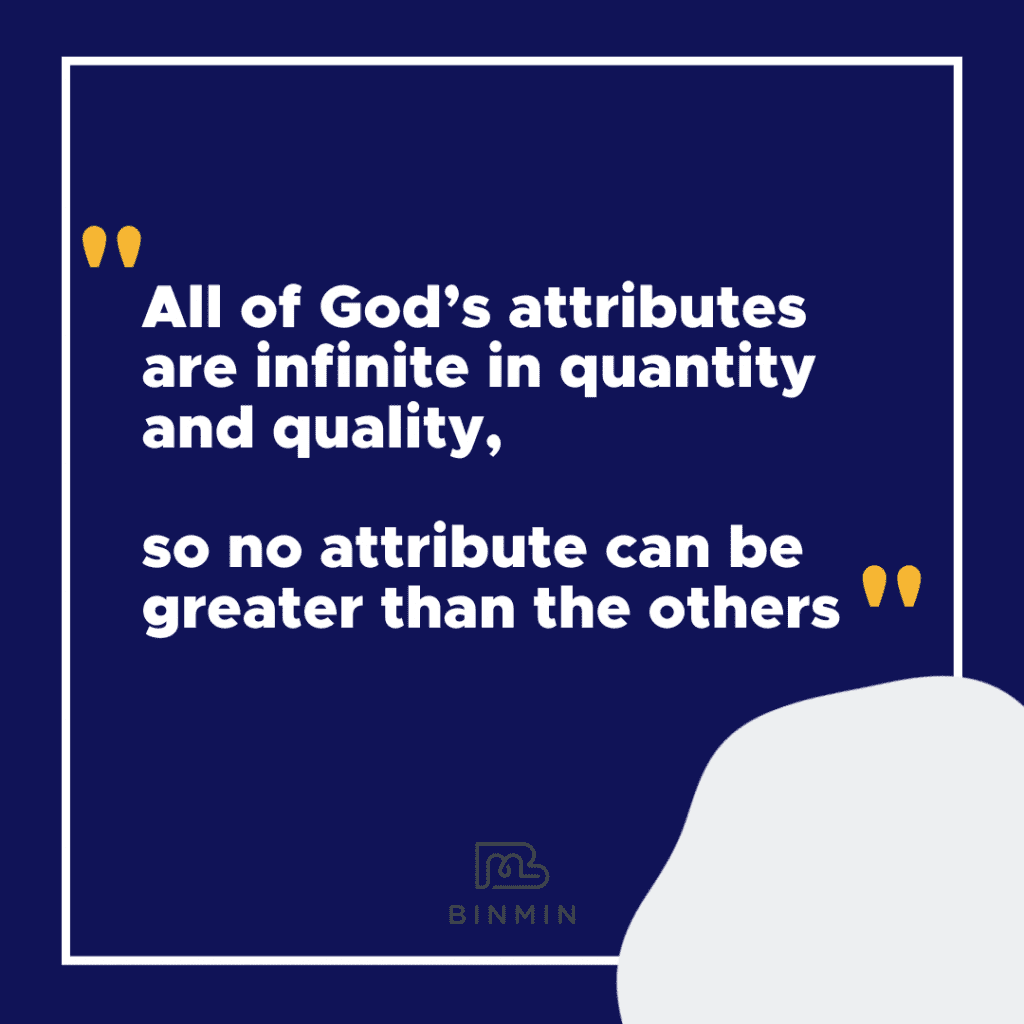 Even mature Christians can get caught up in this argument! The answer, in a nutshell, is that both are wrong.

All of God’s attributes are infinite, both qualitatively and quantitatively! Therefore, no single attribute is more perfect than another.

9.” How Can God Not have Parts When He Has So Many Attributes?” 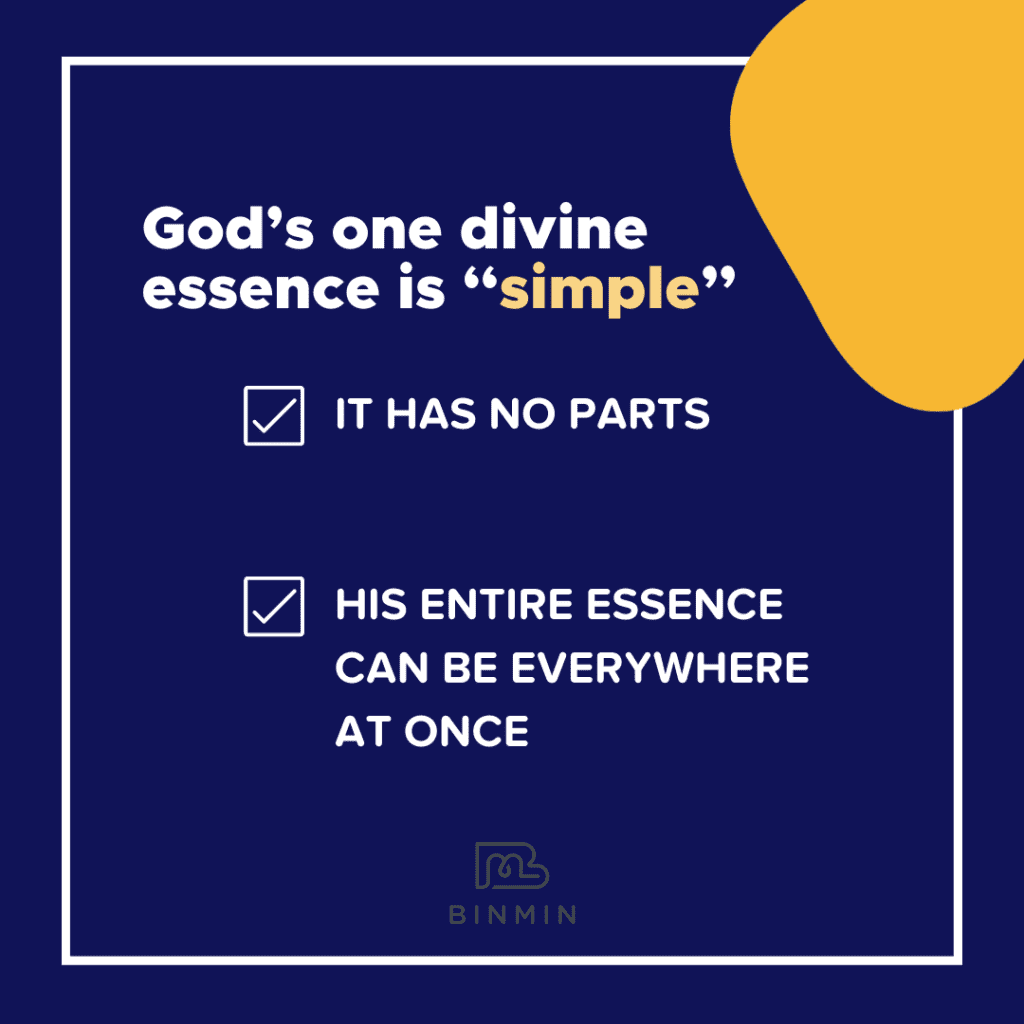 This is such an important question! Why?

Because of all the questions about God, this question helps us understand a fundamental distinction that can be easily confused.

In other words, God has one divine essence. And because he is beyond our comprehension, we describe him using attributes that we learn from Scripture.

We get help in understanding and answering this question by considering God’s attribute of simplicity:

On the other hand, God’s attributes describe his divine essence. They help finite humans apprehend an eternal and infinite being.

Here we go! No sooner did we introduce the attribute of simplicity in Question 9, than critics try to undermine it.

Here’s how one of their questions about God to undermine simplicity is often phrased: “Doesn’t simplicity contradict the Trinity? After all, if there are three Persons of the Trinity, God’s essence must be divided into at least three parts.”

They are wrong and if you were paying attention in Question 1, you already know the answer!

The critics are confusing their categories of the Trinity. God’s simplicity and unity refer to God’s one divine essence.

Rather than being a contradiction, then, there are several ways to explain the above passages within the context of God’s immutability.

God is immutable. His apparent change is due to

Firstly, as anthropomorphisms. These describe God’s actions and feelings in human terms and from a human perspective. For example:

Secondly, Hebrews 1:12 speaks of new stages in the working out of God’s eternal, unchanging plan.

Thirdly, humans can move into a different relationship with God. For instance, God was pleased with his original state of creation. But he is not happy with what sin has done to His perfect creation (Gen. 6:6).

12. “If God is All-powerful (Omnipotent) and Can Do Anything, Can He Sin or Make a Square Circle?”

God indeed has unlimited power (Matt. 19:26). But this understanding comes with provisos.

Furthermore, omnipotence does not mean he can logically do absurd or contradictory things. For example, he cannot make a square circle, cease to be God, or create another God equal to himself.

Were you surprised that these questions about God have answers? At one, time, I was too.

Writing this blog has brought back a flood of memories from the past four decades of my life. Often, those memories were of me floundering—searching for answers to my questions about God. I hope that in discussing some of the same questions I’ve wrestled with, you’ll be better able to understand and defend your own faith.

By studying and learning these answers—searching out their truth for yourself—you will understand God better. And this should lead to greater intimacy with him as you read Scripture, pray, and rely on the Holy Spirit.

And a more intimate relationship with Jesus will foster a desire to share your faith with others.

But an intimate knowledge of God starts with being a genuine believer. Maybe the thought of having an intimate relationship with Jesus sounds foreign—something you’ve never experienced.

If so, I’m glad you are here and reading this article. I encourage you to continue thinking about what I’ve shared. And, if you’re ready to trust in this eternal God who is far greater than we can comprehend, why not make the eternal decision to trust him today?

In my next article, I will discuss one of Christianity’s thorniest issues: How can a good God allow evil and suffering?

Binmin Podcast Ep. 8: God & Origins| What Questions Should I Ask About My Faith?